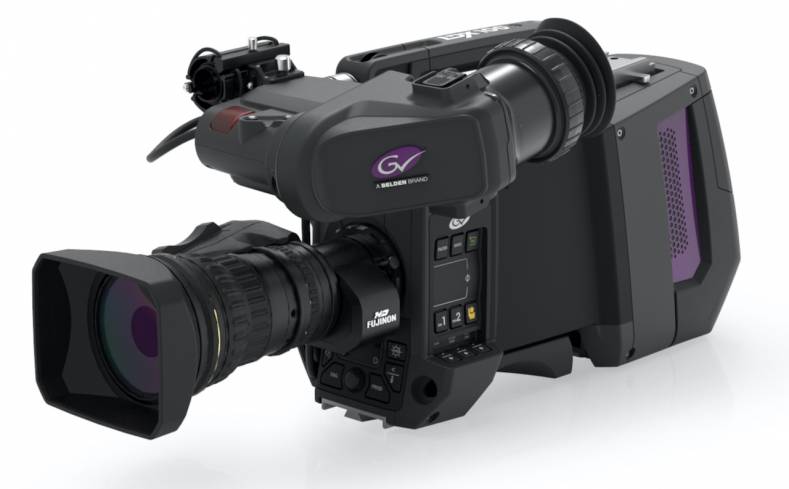 The Grass Valley LDX 100 can be configured in a number of ways, including as a high-speed, native UHD camera for sports replays.

Part of this wide array of camera choices is a result of the rapid advancement of image sensor technology, which has improved significantly and come down in price, so we’re seeing small handheld DSLR cameras like the Panasonic LUMIX S5, a new hybrid full-frame mirrorless model, with the same capabilities—14+ stops of dynamic range and V-Log/V-Gamut compatibility with VariCam color science—as the new Sony FX9, a more fully featured and production-hardy camera, that provides 15+ stops. The FX9 integrates 3D LUTs and Hybrid Log Gamma to streamline workflows.

If it’s high resolution you’re after, Blackmagic Design promoted its new Ursa Mini Pro 12K. The camera—for under $10,000—is targeted at high-end filmmakers looking for pristine RAW recording in multiple resolutions. It also works well for extracting HD and 4K sections of an image for sports replays and other things. The camera’s new Super 35mm sensor and visually lossless codec combine the quality and benefits of RAW with the ease of use, speed and file sizes of traditional video formats. The goal, the company has said, was to make 12-bit RAW workflows in 12K resolution as familiar and easy as 4K productions. 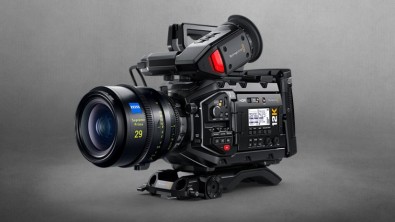 The Blackmagic Design Ursa Mini Pro 12K works well for those looking to extract HD and 4K sections of an image for sports replays and other things. 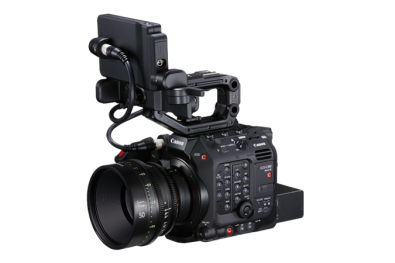 The EOS C300 Mark III ships with an EF mount that can be changed to an optional Locking EF (EF-C) or PL mount.

The latest addition to Grass Valley’s LDX line of cameras is the LDX 100, which can be configured as a high-speed, native UHD camera. Built from the ground up with native IP connectivity, the camera delivers signals directly into the network, conveniently enabling access to them wherever they are needed – even, for example, as return feed monitoring from another camera position.

At the heart of the camera is Grass Valley’s new Titan imager. Designed to answer the specific demands of live sports production, this 2/3-inch imager provides superior UHD resolution and HDR/WCG color reproduction at up to 3X high speed. The camera easily pairs with industry standard B4 lenses to provide the zoom range and depth of field needed in sports without the optical gymnastics of other competitive solutions. This new solution allows production teams to create rich breathtaking images in full raster native UHD without compromising on the storytelling that viewers demand.

The LDX 100’s integrated design frees up multiple rack units per camera that were previously dedicated to camera base stations and deeply simplifies the logistics for mobile productions when having to pair the right number of cameras to CCUs at each event. The camera is a self-contained IP device that connects directly to the network, at up to 100 Gbps, allowing simple connection and discovery of audio, video, and control as well as superior PTP timing using open SMPTE IP standards. Implementation of NMOS IS-04 and IS-05 protocols means the camera is instantly identifiable to a network control system such as Grass Valley’s GV Orbit.

In May of this year Ikegami launched two new cameras: the box-style UHL-F4000 4K/HD 3CMOS separate optics two-piece camera. This is the camera they promoted at IBC. With a compact, lightweight, and low power consuming camera head (optical block), the UHL-F4000 is a two piece camera designed for robotic studios and other unique applications (like mounted in a helicopter). 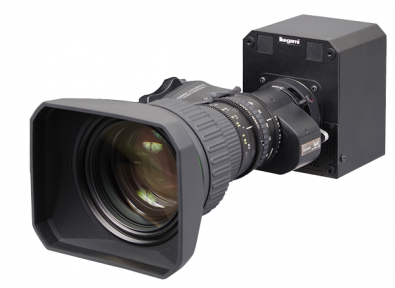 The system includes a compact and power-saving 1.5 kg camera head, an Image Sharpening Function that boosts an object’s edge level when the image is zoomed in (for applications like shooting a car license plate). Variable Contrast Control allows the operator to easily reproduce clear images with proper contrast even in situations of bad visibility, such as shooting through fog and smoke. Additionally, the remote control panel includes a variable control so operators can adapt the Ikegami UHL-F4000 in real time for optimum noise reduction when shooting at night with high gain.

A digital zoom function—from 1.1x to 10.0x in increments of 0.1—is included, giving operators images a very smooth and natural zoom. The company said that combined with the optical zoom, the overall zooming of the image looks more natural. Focus Assist Function is achieved by placing the edge components of the 4K image on the HD MON OUT signal, making it possible to critically focus 4K images using an HD monitor. In addition, the UHL-F4000 can output an up-down reversed image, for use when the camera is mounted upside down. 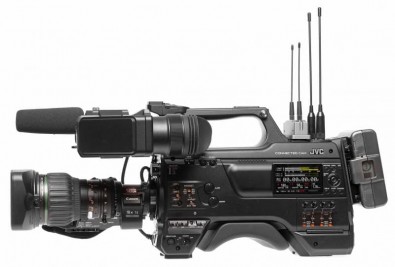 Adding FEC allows for redundant data stream packet loss recovery, meaning that data loss can be corrected before the video must buffer, while Stream ID makes it possible for multiple cameras to stream directly to one device. The company has also incorporated VITC (vertical interval time code) and LTC (longitudinal time code) functions with this latest update, which are important for live production and synchronized streaming of live events, such as concerts, sports, ceremonies and conferences.

Besides its new LUMIX camera, Panasonic also announced two new Broadcast cameras that leverage a Super 35mm single MOS sensor: the AK-UC3300, a 4K Studio Camera, and the Panasonic AK-HC3900, an entry-level camera (in terms of features and cost) that is also ideal for sports coverage and is future-proofed with the option for a future 4K upgrade. Both are equipped with SD card slots to store various settings for multi-camera set-up to capture the action from a variety of different angles.

The HD camera system utilizes a native 4K sensor with multi-format capability. It uses a large 11-megapixel 4K image sensor to achieve a resolution of 2,000 TV lines, making it ideal for live sports and entertainment. The system incorporates an AK-UC3300 camera body and when connected to the AK-UCU600 CCU it creates a flexible system for broadcaster operation with 12G-SDI output, TICO over SDI output (4K over 3G-SDI output) and SMPTE ST2110 output supported as an option. 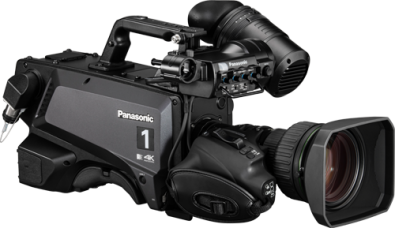 To capture the rapid movement of intense sporting action, the AK-UC3300 features 2x high-speed HD shooting modes, with skew reduction, which is realized through high-speed scans operating at 1/100 of a second.

With broadcasters having to operate with socially distanced and skeleton teams of staff, the camera system has also been developed with a new Remote Operation Panel (AK-HRP1015GJ) with a color LCD GUI that also supports PoE+ and IP control. It allows up to 99 studio or PTZ cameras to be controlled from a single unit. The camera is also compatible with the existing Panasonic AK-HRP1000/AK-HRP1005 Remote Operation Panels.

The second new camera from Panasonic is the AK-HC3900, which is an HD camera that can be upgraded to 4K when required. The camera uses a native 4K sensor. The HC3900 features a new CCU (the AK-HCU250) that includes 3G trunk and 3G prompter functionality.

Sony announced the launch of its new Cinema Line, a series of new cameras that leverage Sony’s vast expertise in image quality. The company said the Cinema Line will “extend beyond basic cinema camera and professional camcorder form factors.” 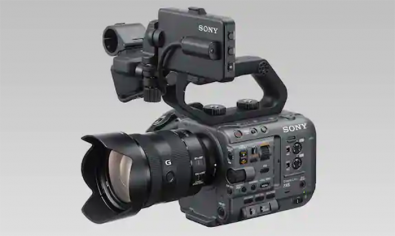 Sony’s new FX6 will include a feature set dictated by customers.

Existing products in the Sony range will also be part of the Cinema Line, including the Venice and FX9 cameras. Venice has been popular for digital movie making, and the FX9 has found a home in documentary production. Sony said the next step is a new model that will include a full-frame sensor like the FX9. Sony will be releasing and shipping this next addition to the range, called the FX6 camera, by the end of this year.

Without providing much detail, the company said that each of the Cinema Line cameras will evolve based on user feedback. The FX9 Version 3 upgrade, available in 2021, will see the addition of the S700PTP, allowing full remote control of Sony’s camera, a Center Scan mode for Super 16mm lens and B4 Lens support (with lens adaptor). In November, V6.0 version of the Venice camera will add some additional features that will improve its value in broadcast and live environments.

So, if you are confused, join the growing crowd of professionals not sure which way to run. To be sure, there’s a camera out there for every discipline, with just the right amount of features at the right price. The challenge is finding the perfect one for you.