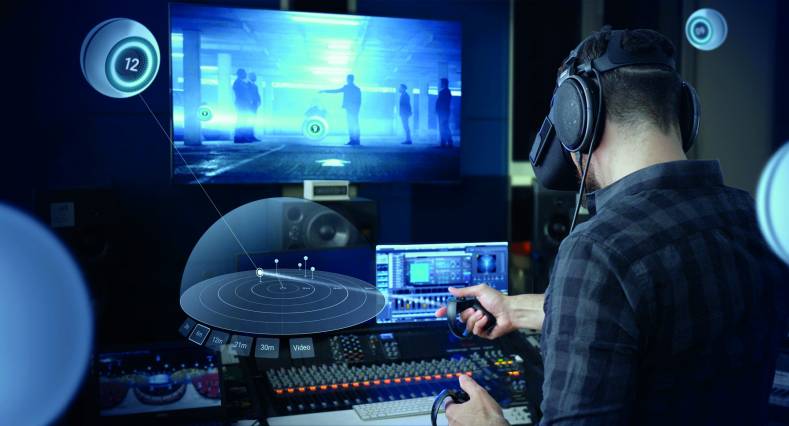 For a truly immersive experience, cinematic virtual reality needs spatial sound - 360° spatial audio will make or break the immersive illusion. Just as with any video production, the key to success is correct recording. While traditional microphones still play an important role in virtual reality productions, they need to be augmented with spatial microphones that capture the full 360° ambience.

This is what the Sennheiser AMBEO VR Mic does - a single compact microphone that operates on the Ambisonics principle, allowing you to capture complete spherical audio from a single point in space via its four matched KE 14 condenser capsules in a tetrahedral arrangement. For playback, the audio is rendered binaurally, allowing you to virtually rotate the orientation of the perspective in all directions. Ambisonics is supported by all major post-production and playback tools on the market today. This makes Ambisonics the appropriate tool for Virtual Reality and all other applications involving immersive sound. Basically, you capture exactly what a listener would hear if he or she was standing in that position. 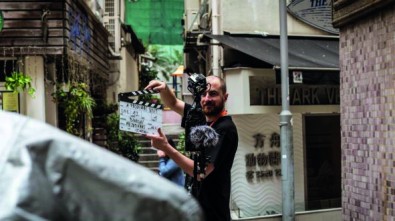 Some care should be taken to record the Ambisonics signal correctly with regard to position and level, as certain errors cannot be corrected during post-production. A field recorder that has an AMBEO VR Mic mode such as the Zoom F8 will help to make this task easier. On location, the AMBEO VR Mic – fitted with the appropriate windshield or hairy cover – should be positioned as close as possible to the 360° camera as you need to patch the microphone out later in post-production, the same goes for the sound bag that accommodates the recorder. The VR Mic will usually be combined with additional conventional spot micrcophones such as wireless lavalier mics. This allows for increased flexibility during post-production, giving the mixing engineer greater control over the final experience.

Mixing for cinematic virtual reality can be done in most standard DAWs as long as they support multichannel tracks, i.e. a minimum of four channels in a track. To support you in the mixing process, you should select an Ambisonics tool chain because most deliveries for cinematic virtual reality – including the AMBEO VR Mic recordings – are in Ambisonics. There are many tools to choose from, such as DearReality’s dearVR tool chain or the free Spatial Audio Workstation available from Facebook. As all Ambisonics tool chains operate in B-format, you first need to convert the AMBEO VR Mic’s raw 4-channel output signal to B-format using Sennheiser’s free A-to-B format converter. The converter is available as free download for VST, AU and AAX format for your preferred Digital Audio Workstation for both PC and Mac. B-format is a W, X, Y, Z representation of the sound field around the microphone. W being the sum of all 4 capsules, whereas X, Y and Z are three virtual bi-directional microphone patterns representing front/back, left/right and up/down. Thus, any direction from the microphone can be auditioned by the listener during playback of Ambisonics B. 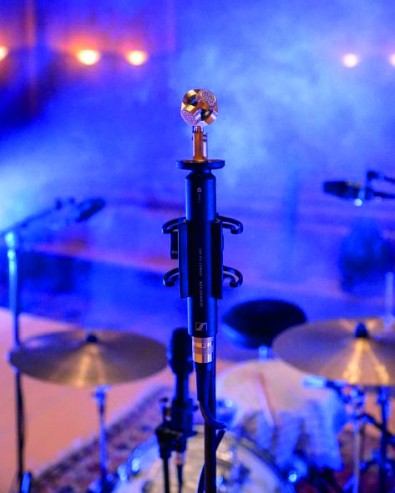 In mixing, use the recorded Ambisonics signal as the base ambience, then add signals from conventional microphones such as wireless mics and foley sound to emphasize and build your final mix. These additional conventional sound sources need to be spatialized so that they come from the correct point in space and match the video image and the ambience. This step is accomplished by your selected Ambisonics tool chain.

During mixing, it is important to monitor your Ambisonics mix. However, before you are able to listen to it, Ambisonics must be decoded. As cinematic virtual reality will in most cases be delivered over headphones, use a binaural renderer. Best practice is to monitor via the binaural renderer that is used on the platform or device that you will deliver your content to.

It should be noted that Ambisonics is the description of a sound field. Therefore, you should never work on any of the constituent tracks of an Ambisonics signal on its own. Always use Ambisonics mixing and editing tools if you want to modify an Ambisonics signal. When using a standard multichannel mixing tool, you must make sure that changes are applied equally to all four channels – otherwise you risk altering the spatial image of the Ambisonics signal.

To ensure that a file is viewed properly as a 360 video with 3D immersive audio, every platform requires its own metadata and has its own file format specifications. Please check the documentation of your targeted service. If you plan to distribute to your own app or custom platform, make sure to include support for Ambisonics decoding. 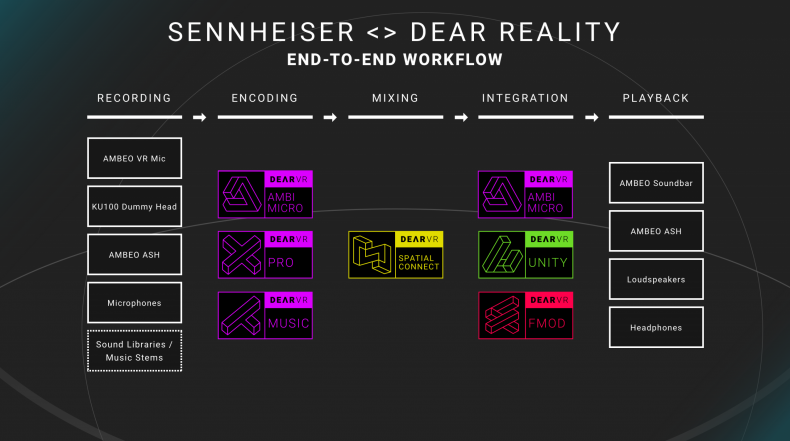