The derivation of the famous CIE horseshoe was explained in the previous part in terms of a re-mapping or distortion of rg color space. The derivation is somewhat abstract because the uses of color science go far beyond the applications in broadcasting. However it is equally possible to describe CIE color space from a more television-centered point of view.

In a color television system, the first thing to be decided must be the primaries that will be used along with a suitable white point. The primary and white point selection processes form a subject in itself that will be considered in due course, but for now, let us simply say that we have come up with three primaries, R, G and B, which form the vertices of a triangle that is the color space of our TV system having a white point somewhere in the middle.

As has been stated, negative light is impossible, so the only colors that can be displayed are those due to all positive, or zero, combinations of the three primaries. We live with the fact that colors outside the triangle cannot be reproduced.

Our three primaries define a three-dimensional color space that can conveniently be depicted as three axes that are mutually at right angles. Fig.1 shows the three axes along with a fourth line heading for the white point. That fourth line is the axis on which R = G = B, and represents the trajectory of a grey scale in which there are brightness changes but no color. 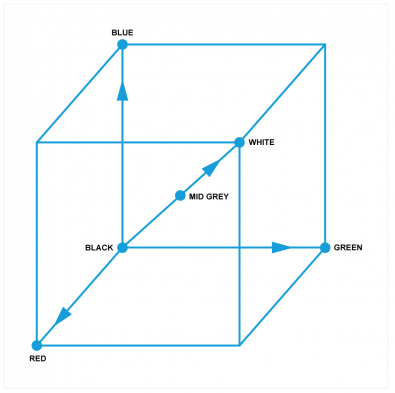 Figure 1 - The RGB cube has a Black - White axis where R = G = B on which there are only brightness changes. Any plane orthogonal to that grey scale axis must represent constant brightness.

It follows that any plane that is orthogonal to the grey scale axis must have constant brightness but can contain any color within the triangular limits of the R, G and B axes. One such plane is given by R + G + B = 1, shown in Fig.2a). Such a plane is useful for colorimetry because it eliminates brightness and changes the depiction of color to a two-dimensional problem.

In television, the constant brightness plane is only meaningful within the triangular color space, but in fact the plane is mathematically unbounded and all that is necessary to get outside the primary triangle is for one or more of the primaries to be negative.

It will be recalled that when the color matching experiments were performed to measure the gamut of human color vision, negative values were obtained where the human gamut went outside the triangular space allowed by the chosen primaries.

The solution to the negative primary problem was to re-map the space by creating new axes, X, Y and Z. The previously orthogonal R, G and B axes are now turned inward so that the gamut of human color vision comes inside the XYZ cube. Fig.3 shows the human color gamut is now completely within the unit triangle bounded by the X, Y and Z axes. At about 570nm the spectrum locus just touches Y = 1 - X and at about 500nm it touches Y = 1 - Z. Fig.3 also shows the somewhat smaller triangular color space where the inward turned R, G and B axes intersect the unit triangle. 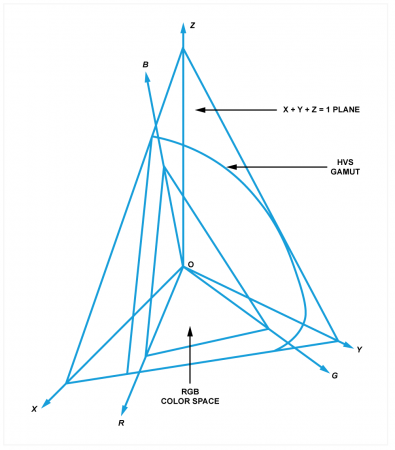 Figure 3 - The RGB to XYZ matrix has the effect of turning the RGB axes inward so the human gamut fits within the XYZ cube.

As this entire depiction is based on X + Y + Z =1, one of those parameters is redundant because only two dimensions are needed to operate on a plane. The final step was therefore to project the X + Y + Z = 1 plane onto the XY plane as is shown in Fig. 4. The result is the familiar horseshoe diagram.

Given that the entire impression of color takes place within the HVS and is entirely subjective, the CIE XYZ representation is about as objective a measure as is possible. If the spectrum of some object under white light or of some known light source is measured according to the color matching filters of the standard observer, the position of the resulting color on the horseshoe can be established.

Although different people see colors differently, colors of various objects that appear in the same place on the horseshoe will appear to have the same color to someone with reasonably typical vision. One definition of typical color vision is where metamers created according to the color matching curves appear to be the same color.

In individuals having various degrees of color-blindness that may not happen. 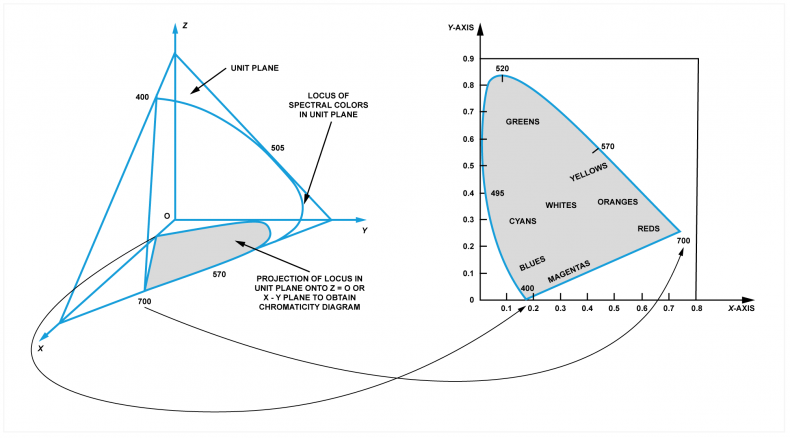 Figure 4 - The constant brightness plane is projected onto the XY plane to obtain the familiar color horseshoe.

Television has used the horseshoe diagram for many years to define its primaries and white points and it seems to be perfectly adequate for that. However colorimetry extends far beyond its use in television and for some purposes, such as color matching in paints, pigments or light sources it is necessary to measure color differences.

One of the first researchers into color differences was MacAdam who performed color-matching experiments with human subjects who were asked to adjust one color to make it the same as a given fixed color. Essentially he was measuring the ability of human vision to distinguish between different hues and saturations. The results were plotted on the horseshoe diagram and appear as ellipsoids as shown in Fig.5.

It is normal to exaggerate the size of the ellipsoids by a factor of ten to make them easier to compare. The ellipsoids are far from uniform in size, and are for example significantly larger in the green region. They also vary in orientation.

The CIE XYZ depiction of human color vision relies on a mapping process. First the color information is depicted on the plane of constant luminance, then that plane is projected or mapped onto the XY plane as was shown in Fig.4.

All projections cause distortion. In many respects using projection to represent three-dimensional human vision on a two-dimensional chart suffers the same limitations as the process of representing a spheroidal Earth on flat maps. Flat maps of large areas do not have a constant scale and great circles, which require constant heading in the real world, come out curved on maps.

One frequently reads that the non-uniformity of the MacAdam ellipsoids is caused by distortion in the CIE XYZ depiction, but a slightly deeper consideration of the matter shows that CIE XYZ is not wholly to blame.

The first point to consider is that XYZ space is linear. In other words any pair of colors in XYZ results in a color on a straight line between them at a point geometrically determined by the relative brightness of the pair of colors.

Consideration of Fig.4 will show that when the unit plane is mapped on to XY space it is essentially hinged about the Y = 1 - X axis (the line going through 570 and 700nm), which means that distances on that axis are unchanged. Distances at right angles to that axis are changed by a cosine factor. 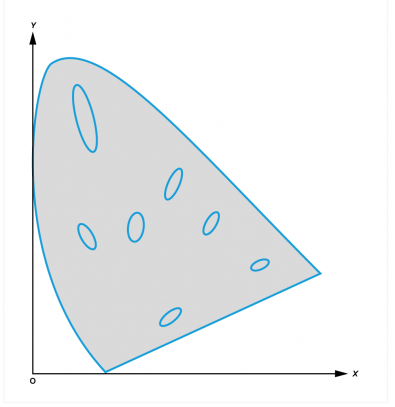 Figure 5 - MacAdam ellipsoids show how the HVS has non-constant ability to distinguish between hues and saturations. Note that the ellipsoids have various sizes and major axes in various directions, which the XYZ mapping does not account for.

The matrix transform from RGB to XYZ cannot account for MacAdam's findings either. It seems that these findings are telling us more about human vision than about CIE XYZ.

"Desire to fit a chosen contour, such as the pyramid, cone, cylinder or cube, coupled with a lack of proper tests, has led to many distorted statements of color relations and it becomes evident, when physical measurement of pigment values and chromas is studied, that no regular contour will serve".

Munsell was right and there is no fundamental reason why perception of hue and saturation should be the same in human vision, so it is unsurprising that MacAdam found ellipsoids. Consideration of the color matching curves show that sensitivity to hue changes cannot be expected to be uniform. For example in the area of saturated green, there is so little contribution from red and blue that significant changes in hue and saturation would not change the ratios of the primaries very much, hence the large MacAdam ellipsoid in green.

Efforts to create a perceptually uniform depiction of color led the CIE to create various alternatives to XYZ that deliberately distorted the axes in an attempt to make MacAdam's ellipsoids circular. Whilst these have some advantages for certain purposes, they did not manage to obsolete either the Munsell system used in art or CIE XYZ.