The camera viewfinder is an essential tool to compose a shot and, in many cases, to focus. Early film cameras used a separate viewfinder, but the invention of the reflex mirror shutter by ARRI in 1937 allowed the operator a parallax-free view through the taking lens. Television cameras developed along a different route, with an electronic viewfinder (EVF) displaying the video output of the camera. Those early EVFs were monochrome CRTs.

The form factor of a camera is partially dictated by the requirements for the viewfinder. TV/video cameras always use an EVF. This can be an eye-piece viewer for a shoulder or handheld camera, or the 7-inch or so monitor of the studio cameras.

The position of the eyepiece viewer on a shoulder mount camera and the need to balance the camera on the shoulder, limits the positioning options for the viewfinder. The reflex optical viewers of movie cameras also constrain the configuration. In DSLR cameras the pentaprism defines the very design of the camera housing.

Digital cinema and regular video cameras are now free from the old design constraints. The options for viewfinder is much wider now, and not restricted to the camera manufacturer, with a strong offering from aftermarket suppliers. 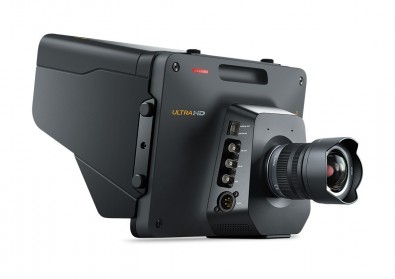 Blackmagic CEO Grant Petty has a reputation for departing from convention. Why should the camera operator have the worst view on set? Why not give the operator a large monitor, and this is indeed what the Blackmagic studio camera features.

The ideal EVF would have a pixel-for-pixel view (after de-mosaicking for Bayer sensors) but EVFs are usually a lower resolution than the camera output for cost reasons and the issues of achieving HD, let alone 4K, in a sub-miniature display. A true representation of the camera output needs a full-size monitor, but that is reserved for the video village or control room.

The video output from the sensor may be down-converted to the lower resolution of the display. This can make it difficult to judge issues like critical focus, especially at 4K resolution, and spatial aliasing. To get around the focusing issue, the viewfinders use peaking, which boosts high-frequency detail to aid focusing. The viewfinder can also be used as a status display and for set up, as well as an exposure meter. One common exposure indicator is the zebra stripe.

As cinematographers migrated from film to video, and moved from optical to electronic viewfinders, some drawbacks were immediately apparent. One was that there could be an appreciable delay in the video processing, which resulted in the EVF lagging a couple of frames. This can make tracking fast moving subjects more difficult. Manufacturers strive low-latency in EVFs.

Another was that the optical viewfinders showed a small area around the film gate. This meant unwanted objects like boom mics or flags could be seen before coming into frame. Many digital cinematography cameras now have oversize sensors so that a similar safe margin can be viewed outside the frame. 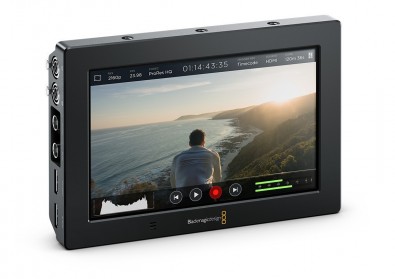 The Blackmagic Video Assist is one of a number of recorder-monitors that can be used with video and DSLR cameras.

The popularity of the DSLR has highlighted some of the issues around camera ergonomics. The DSLR is designed, as it name indicates, for reflex viewing. This only works with still photography. For video use, the manufactures have pressed the rear menu screen into service to give a live view from the sensor. To handhold a camera the steadiest position is for the camera to be as close to the centre axis of the operator. For video cameras, that means the shoulder, for SLRs, that means pressed against the face. To view the rear monitor on a DSLR, the operator is forced to hold the camera away from the body’s axis. A number of after-market products now meet the need of the DSLR market, and there are two main solutions.

In bright sunlight devices like the Zacuto Z-finder ease the viewing or rear screens on DSLRs and mirrorless cameras.

The viewfinder hoods provide an eyepiece to magnify the rear screen and cut out extraneous light. The eyepiece offers a stability by pressing your eye against viewfinder cup.

The HDMI output allows a separate eyepiece finder or monitor to be used. These can be eyepiece-style or the larger recorder/monitors that have become very popular.

EVFs fall into two groups, the eyepiece style with a typical screen diagonal around 0.7 in, and the studio viewfinder with a 7 in or so diagonal. Both styles started out as CRTs, but are now typically LCD, with a move now to OLED technology. The OLED displays offer high brightness and contrast, and are replacing earlier LCD technology.

Another technology for micro-displays is F-LCOS (Ferroelectric Liquid Crystal On Silicon), which is used in the ARRI EVF-1.

Many vendors are now offering the larger viewfinders (~7 in diagonal) with 1920 x 1080 displays. For sunlight viewing these can be used with deep hoods.

Viewfinders continue to improve in many aspects including resolution, peak brightness, and contrast. There was a time when the camera operator had the worst view on set—a flickering reflex viewer, or a sub-optimal CRT. Today’s viewfinders are provided operators with a bright, high resolution image, that is up to the task of composing 4K and HDR images in sunlit condition. A small display is never going to be the same as viewing on a large screen, especially for 4K/UHD, but for a camera-mounted display, they are keeping pace with camera developments.