The KRBK SFN transmitter site, 5 miles north of Halfway MO, is the one tower the station owns. The satellite dish is the STL.

The reliability of SFN transmitters is crucial. However, some SFN sites can be more crucial than others, such as the ones that cover where the most viewers and sponsors are located.

These are interesting times for the US broadcast TV business. In addition to early ATSC 3.0 activities, 988 US TV stations are participating in the 10 Phases of Repack, according to the FCC Phase Assignment data. This is part 2 of a two-part article on Ozark TV station, KRBK. The station entered Phase 1 eight months ago and is scheduled to be completed by 11/30/2018, which is a story within this story and then some. More about Repack and KRBK in a moment. Part 1 of this two-part article about operating an SFN broadcast system is available here.

Despite the differences between ATSC 1.0 and ATSC 3.0 modulation, a higher TPO peak-to-average power ratio (PAPR), and greater STL bandwidth requirements, a SFN site is simply a remote transmitter with GPS synchronization.

After a professional consulting engineer designs the SFN and identifies ERP, antenna height, and radiation requirements at each location to fill the DMA contour, the local SFN construction begins with finding suitable locations. Next is negotiating a vertical real estate deal or building a new tower. Then, it’s time to order what’s needed and build out the site.

There are many more cellular towers than broadcast towers, and antenna height isn’t nearly the issue with SFNs as it is with a single transmitter and antenna. Those features make cellular towers attractive. Beware however, that cell phones and cell modems can have reliability issues at the base of a cell tower.

Sharing a cell tower is also a 24/7 TV mask filter test. KRBK had a surprise mask filter failure couple of years ago at one site, for no other reason than because things happen. The cellular tenant on the tower reported the problem to the station and the filter manufacturer fixed it. 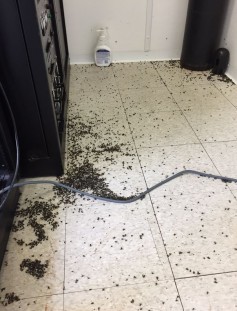 Once one cold fly finds a way into the only warmth in the pasture, they all come in and head for the transmitter fan filters. A few get past the filters and enough can stop a fan. Every fall they find another way in.

Perhaps the greatest challenge to setting up a SFN is the studio transmitter link (STL). Every market is different, but in KRBK’s 5-transmitter SFN, distances and hills made multiple microwave STLs x 5 both impractical and virtually impossible.

There is some dark fiber near a couple of sites, but upfront last-mile costs and monthly fees x 5 made fiber cost prohibitive. Multiple microwave hops were similarly cost prohibitive and resulted in even more people wanting their cut of the action. Public internet timing is too unreliable for SFN use.

Instead, KRBK rents a half-transponder 24/7/365 for a master STL. The synchronized arrival of the ASI signal that becomes ATSC 1.0 at a constant data rate of 19.39 Mb/s makes timing exciters and operating the STL easy. Unfortunately, linking ATSC 3.0 won't be as simple because it has data rates up to 60 Mb/s. ATSC 3.0 uses IP transport streams instead of ASI or SMPTE-310.

According to a Comark ATSC 3.0 Overview White Paper, “The IP contribution network, whether microwave, fiber, or satellite, has to be capable of carrying high speed (250Mbps up to 1Gbps) IP/UDP IPv4 traffic with port addressing capabilities. The contribution network incorporates SMPTE 2022‐1 for Error Correction Coding (ECC) of the IP data passed through the network.”

At unstaffed SFN sites the internet is as vital as electrical service, yet in rural locations occasional temporary outages of either are not that rare. Power and internet service are usually resolved by utility companies and ISPs. Other issues can require a visit to the site. Someone has to sweep snow off the dish, replace a blown dish lightening arrestor after a big storm, or reboot something that refuses to reboot remotely.

Every remote transmitter site, including SFNs, needs a back-up internet connection. Without it, a station can’t verify anything until internet service is restored, or someone from the station visits the site. The studio might not even know the transmitter is off the air until the GM gets calls from nearby unhappy viewers or the local cable company.

The best way to be the first to notify the GM of a transmitter issue is with broadcast IP probe remote monitoring. Shown is a Bridge Technologies 8VSB demod blade for its IP probes.

A broadcast RF IP probe can trigger an alarm for off-air problems sensed at a secondary remote monitoring site. Probes can be deployed anywhere there is an internet connection, such as at a nearby local sponsor’s facility, for example. Probe monitoring of SFNs can keep the station ahead of viewer complaints.

Repack is moving KRBK from channel 49 to 22. If the station were to make a significant transmission change, now would be the time.

It doesn’t take a marketing PhD to observe that everyone’s TV antenna in the Springfield, MO market points the same direction. They are all pointed toward the Springfield antenna farm, located on a plateau in Fordland MO. KRBK’s first Springfield SFN antenna is on a former TV tower in greater Springfield. All markets are different. Springfield is fortunate to have an antenna farm.

In late 2016, KRBK installed its 5th SFN transmitter in Fordland to fill in a shadow on the other side of a hill from Springfield. That’s when some viewers who had never had problems started complaining. The crest of the big hill is nearly exactly between the two transmitters, which is where the SFN signals were timed to arrive in phase, and where few viewers live. Beyond either side of the shadow, viewers were getting new interference.

KRBK Chief Engineer Art Morris had an idea. He recalculated the signal delays for where the viewers are, and then tweaked the exciter delay to move the sweet spot. Adding more delay at one exciter split the single sweet spot into two sweet spots, each one closer to a transmitter. It fixed reception problems on both sides of the hill.

Operating a SFN in a virtually one-tower market has proven to be a bit more complicated than originally envisioned. The SFN technology is stable, but continually rising tower lease costs and satellite fees are expensive and uncontrollable.

KRBK’s FCC Repack proposal is to abandon the SFN and move to a single transmitter and antenna in Fordland. Then, every TV station in the market will be transmitting from a group of 2000’ towers concentrated in a small geographic area. The FCC has approved KRBK’s plan and a new GatesAir Maxiva has been ordered.

At near-2000’ heights, KRBK can cover its city of license in Osage Beach and the Springfield market with one antenna and one transmitter. The station can STL with a single microwave hop, eliminating expensive STL satellite time. Maintenance of the five sites will end. Most other expenses will be reduced to 1/5th, except electrical..

Pete Starke, Vice President of Broadcast at American Tower shared some interesting Repack facts. American Tower has 225 stations that will repack on 128 American Towers. 82 of those stations are in Phase 1, 2 and 3. Of those, only 52 have told American Tower their proposed plans. I asked Starke if American Tower could keep up the pace. He said “It has a lot to do with vendors, manufacturers, and the TV stations. In most cases where stations are replacing their own single frequency antennas, the stations will purchase and install their own RF hardware. American Tower will be responsible for site upgrades and tower modifications.”

He continued “American Tower is building 15 broadband UHF antenna systems in 9 markets to accommodate 34 repack stations for interim and permanent use. For these projects American Tower is responsible for the complete construction and operation.”

American Tower has been busy upgrading its towers from TIA-222 Standard “Structural Standards for Antenna Supporting Structures and Antennas” from Rev F to Rev G.

Starke commented, “Rev G doesn't mean it will support a proposed load greater than current design allows. Until proposed load information is shared with American Tower and structural engineers, nobody knows. The issue is not just Rev G. The challenge is getting everyone to come up with their final plan for the antenna, transmission line, and temporary antennas. Everyone must collaborate to make sure everyone meets their deadlines.”

The tower KRBK will move to needs a near-million-dollar structural upgrade to support KRBKs antenna, STL and transmission line. It’s a third party-owned tower, and American Tower has been contracted to perform the upgrade. One of the looming questions at American Tower is how many other tower owners will come out of the shadows to request similar Repack-deadline work?

The lead car of the Phase 1 Repack / ATSC 3.0 / SFN roller-coaster has reached the zenith, with KRBK and fellow Phase 1 stations in the front seat, and hundreds of other stations in the cars behind. One phase after another, repacked stations are about to race down a steep incline deep into wholly uncharted territory.

After all screws are tightened, and all temporary gear is removed, the behind-the-scenes RF overhaul story will end, and reality will kick in. If station sales, marketing and promotion departments wait until that moment to address all these wholesale changes and then sell them, it will be too late.

When engineers talk about ATSC 3.0, non-technical people zone out about the time they hear the “point 0.” Its engineering’s job to get the rest of the station excited and planning. Department head meetings are a good place to share and update ATSC 3.0 information. Money is what it’s all about. Focus on the new sales and marketing opportunities ATSC 3.0 provides. Technical gibberish confuses people.

TVs real bosses sit on the other side of the screen. How will TV viewers react to all the channel-shifting, channel-sharing and technology enablements? Will ATSC 3.0 be the ‘next big thing’ or will more channel shifts, incompatible transmission formats and 5G streaming make TV broadcast transmitters irrelevant?

A transmitter doesn’t make a TV station. Transmitters were once the only connection with viewers, but not anymore. On the other hand, OTA TV is ubiquitous and free. Viewers will decide what and how they want to watch, and sponsors will follow.

The next decade of repacking, ATSC 3.0 transitioning and 5G promises to be the most interesting inside-TV reality show never broadcast.