Last February, research firm BIA/Kelsey presented the results of a study suggesting some of the possible effects of broadcasters moving from ATSC 1.0 to the new generation ATSC 3.0. The key finding was that such a migration would drive significant new and incremental revenue for medium and large-market stations within the transition’s first three years. But with the FCC’s recent action to make adoption of 3.0 optional, does that still hold?

Yet, the survey shows that respondents do not have a clear idea yet of what technology upgrades will be required nor the software and business practices for accommodating an advanced interactive advertising business. Then there is the not-so-small matter of cost.

Respondents said that improvement in audience experience, which was a key driver to the rapid consumer adoption of HDTV, is ATSC 3.0’s least important benefit. Perhaps as a result, more than half of broadcasters are concerned that consumers won’t purchase ATSC 3.0-compatible televisions.

“ATSC 3.0 will change the business of broadcasting into a next generation wireless communications business,” said Mark Fratrik, chief economist and SVP, BIA/Kelsey. “The biggest opportunities around the implementation of ATSC 3.0 are that it will give broadcasters a new opportunity to grow and address their major concerns like reversing recent local television station viewing trends,” he said.

While the BIA study suggested measurable benefits of moving to ATSC 3.0, other studies may indicate that predicted benefits are no sure thing.

According to the WideOrbit report, only 6% of the respondents were, “very familiar” with the technology. Fully four times as many, 24% were, “not at all familiar” with ATSC 3.0. 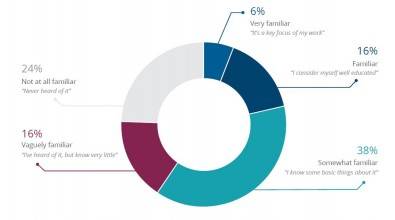 The survey asked how familiar the person was with ATSC 3.0. Click to enlarge.

It was not as though the survey asked nontechnical people, the investigation sampled broadcast industry sales, traffic and engineering professionals. These are experts that have the most to gain from a successful transition. And, they are most likely to have an opinion and business influence on adopting the technology. As the chart shows, almost one-quarter of broadcast professionals were not familiar with 3.0.

Despite the low “highly familiar” survey results, more than 75% of respondents said their companies were excited about ATSC 3.0 and half said their station group was actively looking at whether to make the transition.

Broadcasters hope that viewers will help drive this transition. Yet, half of the respondents were concerned that consumers will not see sufficient value in ATSC 3.0 to buy new televisions. Plus, there is yet no firm word from the consumer manufacturing industry that all new TV sets will be equipped with ATSC 3.0 tuners. In addition, few expect government to fund convertor boxes as it did for the conversion to ATSC 1.0. Both factors could dampen viewer uptake on the technology.

When asked if their business were actively planning on implementing ATSC 3.0, just over half, 56% replied yes. Yet, 44% replied their stations were either not considering or didn’t know about any conversion plans.

One quarter of the respondents plan to be using ATSC 3.0 by 2018. Another 32% say the timeframe is for 2019 or later. Forty-four percent say they don’t know if 3.0 is relevant for their businesses or have made the decision to not make the transition.

More than 91% of the broadcasters say the transition is being driven either to boost profits, increase total revenue or increase audience size across multiple screens.

What will it cost?

One area of concern for broadcasters is cost of conversion. Just what might be the expense of moving an RF system from a 1.0 to 3.0 capability? The survey showed that to be the number one concern for broadcasters as they look forward. Not far behind was concern about how viewers might react to the technology. Almost 60% were concerned that viewers would not purchase new 3.0 TV sets and one third said viewers might perceive any potential benefits for 3.0 as insufficient reason to replace their current TV sets.

The survey then asked, “What is your estimate of the average cost of converting a single station to ATSC 3.0?” 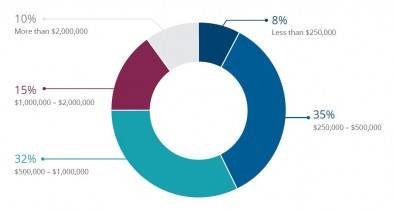 The survey asked for an estimate of the average cost to convert a single station to ATSC 3.0? Click to enlarge.

The major cost component for broadcasters is likely to be the new RF system. Yet, many stations might be able get a break on out-of-pocket transmitter/exciter costs as a result of spectrum reallocation reimbursements. Granted, the FCC is not going to pay for a new transmitter just because the station wants to transition to ATSC 3.0. However, a new and upgradeable transmitter might be a wise purchase.

Will consumers support the transition to ATSC 3.0 through new TV set purchases? It is unknown.Consumer Reports magazine published an article about the conversion to ATSC 3.0 focusing on a less-mention aspect of the new delivery platform. Paraphrased, the title was, “Free Over-the-Air TV Is Going to Get Better—but will it still be free?

Throwing even more cold water on the yet small flames of ATSC 3.0 were article statements like, “ATSC 3.0 isn't going to be compatible with ATSC 1.0 broadcasts. Because all current TVs have ATSC 1.0 tuners, they won't be able to receive the new signals.”Such publicity will do little to encourage viewers to buy that next new television.

Broadcasters have at least two challenges ahead. To convince viewers of the value and benefits of ATSC 3.0 while having to bear the expense of making the transition themselves.