The success, or not, of ATSC 3.0 will depend greatly on viewers being willing to buy new TV sets. An April nationwide consumer survey shows high consumer interest in the features the standard may offer. But, will it be enough to launch the next generation of broadcast technology?

According to a national survey of 1,201 broadband subscribers by research firm Smith Geiger for technology company Verance, respondents said they would spend $205 more than they originally planned on a smart TV to have some ATSC 3.0 features. The survey also showed a purchase intent over the next 12 months increasing to 74% (up 19 points from their original baseline).

In the survey, certain ATSC 3.0 features were described to the respondents and they were then asked how that feature each might influence their decision to buy a new ATSC 3.0-enabled television set and if so, when might that purchase take place.

The following features were mentioned in the survey, all of which provide a greater level of control, convenience and personalization. These responses received popular response.

Seth Geiger, President and Co-Founder, SmithGeiger directed the project. He said, “This survey verifies unequivocally that viewers, broadcasters and TV manufacturers stand to benefit greatly from the next-generation TV standard. The willingness of consumers to pay a higher purchase price and expedite their near-term purchase windows for internet-connected televisions in exchange for new features is among the most compelling evidence yet of the value of ATSC 3.0.” 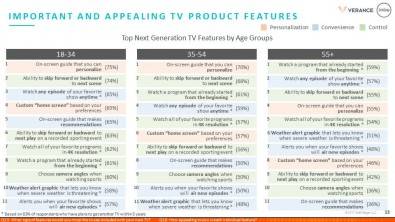 “These findings clearly affirm the working hypotheses of the Advanced Television Systems Committee that have driven the on-air tests by Fox, NBC Connecticut / WVIT, Univision and the Pearl TV alliance,” said Geiger.

Of those surveyed, 55% initially indicate they plan to buy a smart TV in the next 12 months and spend an average of $950 on a 52-inch screen. Once new ATSC 3.0 features were described to survey respondents, the likelihood of purchasing a 52-inch smart TV with such features rises 19% to 74% - and their willingness to spend increases $205 to an average price of $1,155 with no change in screen size. 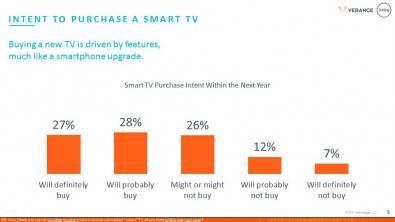 Among those who do not currently own a smart TV, after hearing about the features these consumers indicate they are 26% more likely to make a purchase. And, significantly, 45% of respondents initially expressing no intent of buying a smart TV in the next 12 months now indicate they would be likely to purchase one after seeing the next-generation features of ATSC 3.0. See chart below. 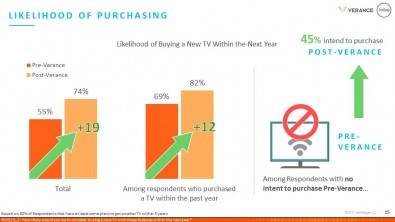 I ask again, this time about ATSC 3.0, “When will you (professionals in the industry) buy an ATSC 3.0-enabled TV set for your home?”

Broadcasters and production teams can demonstrate their support for the conversion to ATSC 3.0 through the purchase and highlighting of the technology in their own homes. If your neighbors and friends know you work in television and yet do not support 3.0 with a new TV set, how might this affect their purchase decisions of the technology?

Join the ATSC 3.0 launch. Begin saving your pennies now so when the new sets appear you will be ready to buy.

Editor note: More information on the Verance-SmithGeiger survey is available at this link.