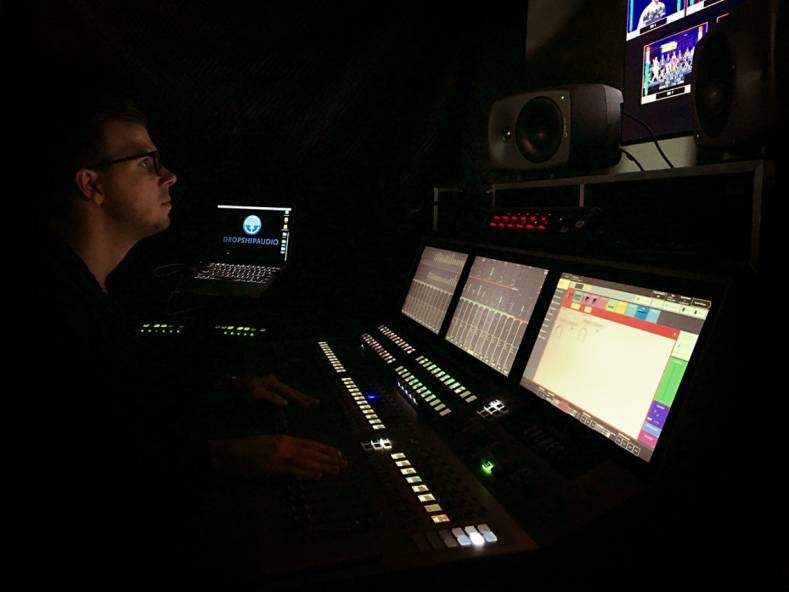 In this interview, we meet Sean Prickett – a “young gun” audio mixer that’s making a name for himself on some of TV’s most high-profile live and audition shows. Most recently, Sean was A1 for the live-broadcast finals of the CBS reality-TV dance competition “So You Think You Can Dance” (SYTYCD), which just wrapped its 14th season. Other impressive A1 credits include the 2017 U.S. Presidential Inaugural Balls, SYFY Channel’s “Live from Comic-Con,” and MTV’s “Wonderland” and “VMA Weekend,” and he’s already out working on the new season of “American Idol.”

In 2015, Sean founded Drop Shop Audio to fill a niche for specialized broadcast audio rentals, engineering services, and control-room buildouts, with a focus on traveling productions like SYTYCD and other specialized projects. We talked to him about his career, his company, and his current projects.

How did you find yourself in the audio engineering business and who were your influences?

I’ve been interested in music and audio since I was very young. Right out of high school, my focus was more on music and touring, and I was able to get on with Clair Global as a base-level system tech and then eventually moved out of touring into their broadcast division as a broadcast audio engineer. After about five years with Clair, I transitioned into full-time television audio and started freelancing, and I haven’t looked back.

Along the way, I’ve been very fortunate to be helped along by some very key players in the business, including well-established mixers like Mike Abbott. It didn’t hurt that I came up in the Los Angeles area, where there’s been a shortage of qualified audio engineers for a while now. Even today there are more shows than there are qualified mixers.

What led you to found Drop Ship Audio?

After I’d begun to acquire a couple of key pieces of gear, like a Calrec Summa desk, I saw a need for a boutique, specialized audio provider. There are plenty of companies that support the large truck market but not many that offer audio control room build-outs and flypacks beyond the truck realm. And that’s just the type of solutions that shows like SYTCYD and “American Idol” need for their touring audition segments.

The growth of streaming video was another big factor. These productions have a growing need to produce video content for distribution beyond the traditional avenues, such as online streaming services; in other words, content that’s not produced by the trucks. It’s another niche I wanted to fill with Drop Ship Audio.

Tell us more about your workflows for “So You Think You Can Dance.”

First, I was audio engineer for the road segment, which lasted multiple weeks and consisted of audition shows in New York and Los Angeles as well as the “Academy Week” for the callbacks in Las Vegas. I traveled to each location with the audio flypack I’d created using the Summa.

With its smaller footprint, the mixer is an ideal solution for the flypack. It gives me the big-broadcast capabilities of a larger console, but in a package that’s easy to pack into a road case. Also, thanks to the Hydra2 network, it’s is really scalable – it’s easy to connect it to other Calrec consoles, and adding I/O is as simple as renting an extra box and plugging it in. That’s a huge benefit from both a usability and rental standpoint.

With the first broadcast on Aug. 7, we entered the live finals phase of the show and the production moved to CBS Television City in Los Angeles. Every Monday night, I mixed the two-hour live show on a Calrec Apollo in the studio, which utilizes the Hydra2 network for stage connectivity and distributed I/O. 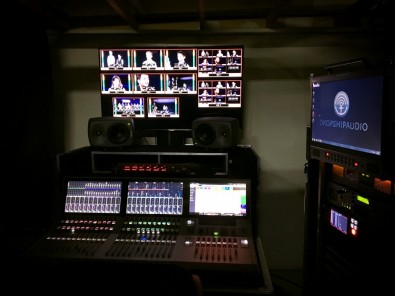 Going back to an Apollo mixer at CBS must feel a bit like going back to your roots. How did you get started on the Apollo originally, and what lead you to purchase the Summa?

The first time I used an Apollo was several years ago, when I first transitioned to becoming an A1. One of the first truck shows I did was in NEP Denali’s California truck, which has an Apollo in it, and I remember being amazed at the sheer horsepower of the desk. Since then, I’ve done a lot of work on the consoles, a given since they are the standard on many of the NEP fleet. Last January, I mixed the coverage of the U.S. presidential balls aboard the Denali California, and I’ve done multiple studio-based shows at CBS TV City using the desk.

The Apollo has really become my console of choice for mixing live shows, so when I decided to put together the flypack offering for Drop Ship Audio, the Calrec Summa made sense. With it I’m able to offer my clients the same reliability and power as larger consoles. The touchscreen user interface lets me access more advanced functionality a lot easier than I could on other desks. For SYTYCD, Calrec delivered and commissioned the desk right before we did the first show. For me to be able to just sit down at the console and build a show, having never mixed on it before, speaks volumes about the usability.

And also, as I mentioned earlier, the Hydra 2 network – the same technology used in the Apollo – gives the Summa great routing flexibility. Because Calrec uses the same I/O across all of its consoles, I’m not limited to specific field boxes, and I’m never limited by the desk or the amount of I/O. I’m never left thinking “I wish I could do that” – I can do almost anything I want.

Where do you see the audio industry headed? What are the biggest trends?

Audio over IP networks is making huge inroads in entertainment broadcasting, and emerging formats – like Dante for audio booth and communication interconnections and AES67 – are really reshaping the way we do things. There’s also a continued movement away from copper and toward all-fiber backbones, which means we can locate production further away from the venue without affecting signal quality or limiting our capabilities.