With the emergence of 4K and HDR production, remote production companies and studios have been struggling to make sense of the additional requirements for more cabling (4X more) and native equipment that supports it. Where the highest quality HD signal uses a single 3Gbps SDI cable to connect point A to point B—e.g., a camera to a production truck—the same workflow in 4K (or UHD) requires four separate 3 Gbps cables, often referred to as a “quad link” or “4-wire infrastructure.

Looking to reduce weight and system complexity, production companies and master control suites are demanding a single-cable solution, and the industry is responding with a 12Gbps cable and connections on key pieces of gear to make it a reality. Thus far, not many customers have implemented true 12 Gbps systems, but a trend is emerging for all of the obvious reasons.

“With 12G, you have the bandwidth to handle high-resolution requirements like 4K, UltraHD, high frame rates, and deep color depth, over one 12G-SDI cable,” said Bryce Button, Director, Product Marketing at AJA Video. “Simplifying everything down to a single cable is a massive time, routing and resource benefit for these types of productions.”

AJA Video’s FS4 is a 4-Channel 2K/HD/SD or 1-Channel 4K/UltraHD frame synchronizer and up, down, cross-converter; in a 1 RU frame.

“If you can work with a 12G switcher or router, it also saves logistical resources all across your workflow,” he said. “This can also save physical space, taking up a smaller footprint when you’re constructing video infrastructure. Many 4K cameras are now offering at least 6G, and since 12G-SDI can also handle 6G-SDI, you can have a single cable that can handle all the way from 1.5G to 12G and everything in-between.”

At the NAB Show in April, AJA Video Systems showed a new 12GM mini-converter that allows users to convert different SDI sources to and from 12G-SDI. It’s essentially a multiplexer and demuxer that takes four 3Gbps SDI signals and converts them to a single 12G-SDI, and vice versa. The company also offers the 12GDA, a 1x6 re-clocking distribution amplifier, which distributes a single 12Gbps source to 6 different outputs. It also works on 6G, 3G, and 1.5G-SDI signals as well.

The AJA FS4 provides the option of using 12G-SDI SFPs, and conversion to and from 12G-SDI along with a host of other features that include up, down, cross-conversion, MADI audio support, powerful processing for Region of Interest (ROI) scaling, color correction, processing amp controls, and motion adaptive de-interlacing—all in a 1RU form factor. 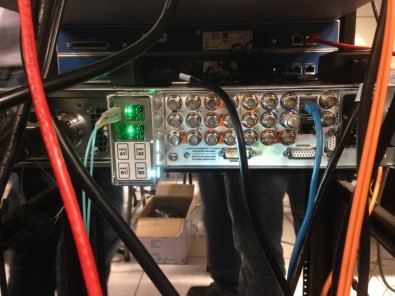 Grass Valley supports 12Gbps SDI through an SFP-SDI module on its new XCU-UXF camera base station, shown at NAB earlier this year. This image shows four 10 Gbps SFP+ cages. All four are used for 10G IP communication, however if you put an (MSA compliant) 12G SDI module in cage B2 (lower right corner), you get a 12G SDI stream in 4K mode. Click to enlarge.

Also at NAB this year, Grass Valley showed an SFP-SDI module on the back of its new XCU-UXF camera base station that uses four 10G SFP+ cages for 10G IP communication. The company claims that if you put a 12G SDI module in one of the cages, you get a 12G SDI stream in 4K mode out of the camera.

Another factor in the decision into migrate to a 12 Gbps infrastructure is how far the user needs a signal to travel. Broadcast cable and SDI connector supplier Canare offers a series of product that supports 12 Gbps signal flow. Company CEO Shin Minowa said that when designing a system, customers have to understand their workflow.

Featuring advanced attenuation characteristics that are optimized for 12 Gbps signal transport, Canare’s L-3.3CUHD cable is rated for up to 60 meters (about 200 feet), its L-5.5CUHD up to 100 meters (330 feet), and its L-8CUHD up to 140 meters (460 feet). These distances can be extended through the use of fiber-optic transceivers on the back of a camera (from companies like Grass Valley, MultiDyne and SWIT Electronics) that convert the SDI signal to light for transport over miles of fiber cable. The company also makes 12 Gbps-rated BNC (including Neutrik) connectors for these 12G SDI cables.

At the 2107 NAB Show, CANARE rolled out a new line of coaxial cable and BNC connectors that are optimized for 12 Gbps signal transport.

“We see the demand for 12G cable gradually increasing, with ‘12G’ being buzz word in the industry,” Minowa said. “However, we believe that most of our potential customers are still at the inquiry and evaluation stage of upgrading their cabling system from their current SD/HD/3G applications. Cost is a big issue in deciding when to move to 4K production and distribution.”

Evertz Microsystems has been working on 12 Gbps products since 2015, although there were not many interested at the time. At this year’s NAB, company representatives spoke about not only 12 G, but also 24 G, 50 and 100 Gbps. The latter high-capacity connections could be used for bi-directional signal flow, connecting multiple routers together or for supporting an entire production and playout facility that handles lots of data.

“The attraction of 12 G is less points of failure,” said Michael Lewis: Product Manager – Modular Products, at Evertz Microsystems. “Some people get a little concerned about the timing and synchronization when you have a lot of four-wire around a facility. The biggest thing is 12G SDI provides a comfortable interface that people are used to.”

Lewis said Evertz has sold a considerable amount of 12 G SDI equipment to Korean and Japanese broadcasters and production studios preparing for the 2018 Winter Olympics in Seoul, South Korea and the 2020 Summer Olympics in Japan, which will both feature 4K and 8K signal acquisition and distribution.

Lewis said they recommend that production companies begin their migration plans by implementing 4K SDI islands with products—such as the EQT-1616-12G router—and build out from there as the need arises. The company also offers a range of conversion cards that can be easily rack mounted and make signal conversion easy.

“No one’s going to rip their whole facility out and start new,” Lewis said, referring to the upgrade from HD top 4K facilities. “The first step of any move is to decide between four-wire or native 12G technology,” he said. “Evertz make a lot of conversion cards to support this move. You can one of our up/down/cross converter cards to upconvert to either 4-wire 4K or 12G SDI. We also have cards available that will do quad link 3G SDI to 12 G SDI conversion. And, our Magnum control software can handle both types of signals in the same way.”

Of course, once the 4K signal counts in your facility begin to increase significantly, then the consideration of moving to an IP-based environment becomes very real. With its packet-based delivery scheme, IP is agnostic to format or signal count. In this case it’s all just data. With 12G SDI you need two cables, one to go in and one out, versus a single IP cable that is bi-directional.

“The nice thing about IP is that you are not constrained to one cable, one signal, “ Lewis said. “You have a lot of flexibility. You can do things you can’t in a baseband environment. With IP there’s a lot more flexibility in how you can set up your infrastructure and where resources can be allocated. However, 12G is working the same way we always have with SDI cabling, so there’s an argument to be made to stay in the SDI world, at least for the short term.”

“IP won't replace SDI cable soon due to the cost involved with making a totally new investment,” Canare’s Shin said. “Additionally, there is no standardized IP system like SMPTE. Therefore, no one is anxious to make the commitment to move to an IP system.”

The good news is that manufacturers of cameras, video production switchers, servers and other key pieces of production equipment (including fiber-optic transceivers and conversion cards) have shown solutions to support all forms of 12 Gbps signal acquisition and delivery.

Making Hay In the 12G Sunshine

It’s clear broadcast and production equipment manufacturers have a short window to promote and sell 12 G technology. Even specialty companies like Cobalt Digital, a supplier of signal conversion and distribution technology, are riding the 12G wave. At the NAB Show in April the company showed its new 9904-UDX-4K-12G UHD 12G/3G/HD/SD-SDI up/down/cross converter designed for both openGear frames and Cobalt’s BBG-1000 Series stand-alone units.

“We see great potential in 12G SDI, at least in the short term, for mobile production companies looking to shed weight and simplify their onsite production activities,” Bob McAlpine, CEO at Cobalt Digital. “We’re now offering an option to upgrade to 12G-SDI on a number of our products and together with other vendors’ technology, customers can realistically deploy an end-to-end 12G SDI workflow today.”

Was with many new technologies, the benefits of a 12G-SDI infrastructure are attractive, but cost is the main hurdle that many are not ready to overcome. Also, as signal counts increase, eventually the laws of physics won’t be able to keep up with that copper cable and the industry will have to move to IP (or something else). For now, 12 Gbps transport over a single cable is a technology in search of a market.