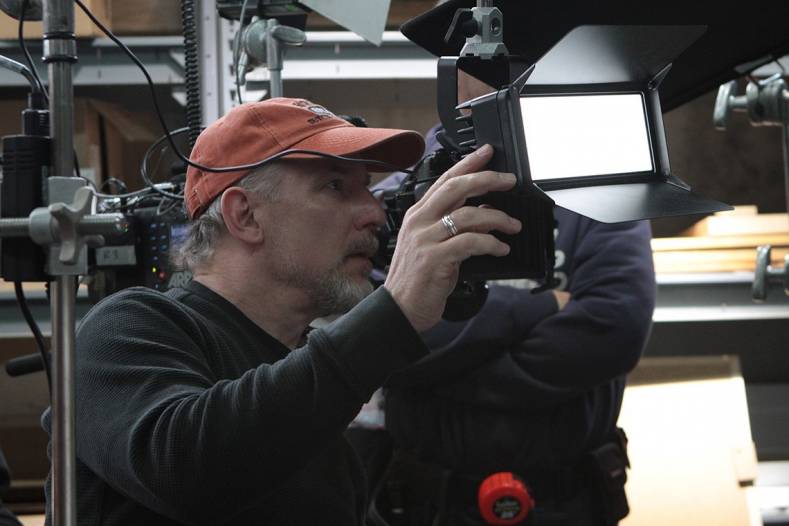 Bill Holshevnikoff suggests lighting technicians first decide what aspect of light is most important to them, then select the solution that

Ask any television or film lighting designer and you’ll get the same answer. Lighting is currently going a period of rapid technological change and LED fixtures are gaining fast over more traditional lighting — especially tungsten.

From lighting directors specializing in television studio design to working professionals lighting on-location sets, their brand loyalties may differ, but all are now working with a combination of newer LED fixtures and more traditional fluorescent lights. None are now recommending tungsten lighting to clients building new facilities.

“We are not getting anyone calling us today for tungsten,” said Mack McLaughlin, CEO and creative director of FX Design Group in Ocoee, Florida. “If they buy new, it’s LED and maybe some fluorescent lighting.”

Tungsten halogen fixtures have long been used in television and film and are respected for their light quality. Halogen lamps have quartz envelopes and are filled with a halogen gas such as iodine or bromine. The gas combines with the evaporated tungsten from the filament during use.

However, tungsten fixtures are power hungry and energy inefficient — with as much as 80 percent of energy turning to heat. This raises studio air conditioning and electrical costs, and requires expensive dimming equipment and studio maintenance.

LEDs have improved dramatically over the past two years and “now fit the bill” for studio use, said McLaughlin. “They are about three times more expensive than tungsten lighting, but several manufacturers have an ROI calculator. Depending on how many hours a day you run your studio and what your local power cost is and if you are getting rebates, you can typically pay off the fixtures in 12 to 18 months. After that you’re actually putting money back into your operating budget.”

Even if clients are cash strapped and can’t pay for upfront for LEDs, McLaughlin noted, they can now lease the lights over a three to five-year period. If the studio is of brand new construction, the savings from electrical wiring, the grid, HDAC and other costs easily pay the price of the new lighting fixtures.

Hannes Kling, director of production at Devlin Design Group in Crested Butte, Colorado, also works with LED and fluorescent fixtures and is not installing new tungsten technology. “The reason we are moving away from tungsten is color temperature and electricity, meaning the expense of using tungsten. Tungsten bulbs last 2,000 hours and then need to be replaced. They use significantly more power than LEDs and the heat has an impact on the cooling needs of the studio.”

There are other issues with tungsten that are less known, Kling said. “When a lighting fixture is nudged a couple of inches up in the grid, it can have a big impact of how the lighting looks on camera. Anytime someone has to go up to that tungsten fixture — either to re-lamp it or replace a piece of burned out gel — there’s the potential the fixture is going to get knocked a little bit. A lot of television stations are moving more to automation and turning lighting over to their engineering staff. It’s not always second nature for engineers to be as careful with fixtures as it is for the lighting pros.” 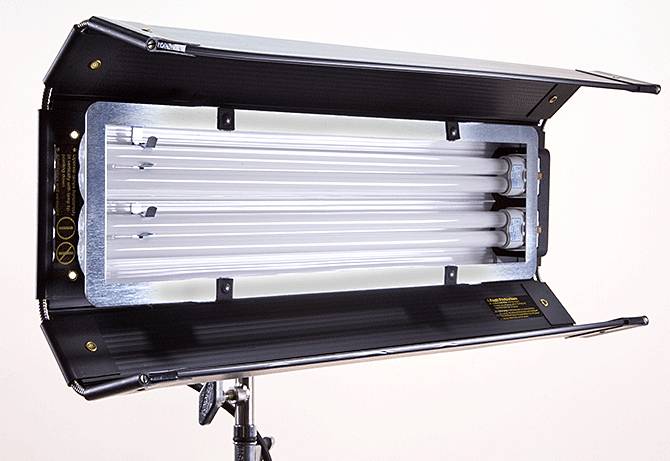 The Kino Flo Diva-Lite 201 fixtures are portable and can go from nighttime to daytime interiors by switching True Match tungsten for daylight quality lamps.

The reason fluorescent is still so popular is a smoothness and soft quality of light that LEDs don’t yet have. “Fluorescents tend to work well as fill fixtures, while LEDs are being used more for key and back light,” Kling said. “They have a little bit harder edge. LEDs are ideal for replacing tungsten fixtures. But we are not quite ready to give up fluorescents because of how smooth they are.”

Another issue in studio lighting is control of the light fixtures. Traditionally, tungsten fixtures use a theatrical model where a single high-capacity dimmer controls several lights. Several fresnels on one dimmer gives less control over the value of each fixture.

“Our preferred way to go now is with the DMX protocol,” said Kling. “The dimming is done internally in each fixture. We can take a number of fixtures and plug them into straight wall power up above the grid and run DMX cable between them. We can control them that way.”

DMX512, for “digital multiplex,” is a standard for digital communication networks created in 1986 and commonly used to control lighting and other studio effects. It was originally intended as a standardized method for controlling light dimmers, which earlier had employed various incompatible proprietary protocols.

Soon DMX became the primary method for linking controllers to dimmers and special effects devices such as fog machines and intelligent lights. It has also expanded to novel uses ranging from controlling strings of Christmas lights to electronic billboards.

Another trend affecting studio lighting is controlling the change of color lights for sets and blacklit graphics. “These are changing colors, controlled by DMX and also lit by LEDs,” said Kling. “We noted that the backlit graphics really popped when lit for daylight temperatures at 5600 Kelvin. This is especially true of the warm colors...the reds and ambers are much richer when the lights are set for daylight. We start at 5600K when we can, though not every client is ready to make that jump. We also manipulate the monitors for the lighting. Interestingly, with this lighting temperature, the monitors look better on the air than to the eye in the studio.” 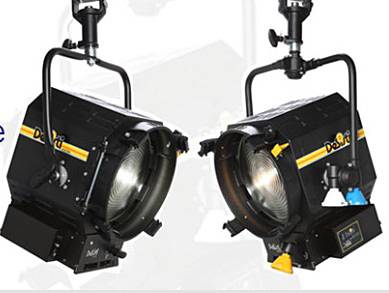 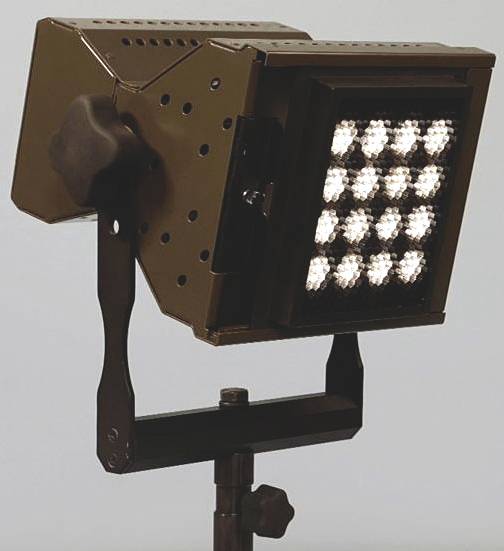 Interchangeable optical cartridges are easy to remove and install in the field, making for a multifunctioning fixture perfect for dynamic environments.

However, Bill Holshevnikoff, an Emmy Award-winning lighting designer and cinematographer who has lit many locations for film and television for over 25 years, prefers ARRI for LEDs, Kino Flo for fluorescents, Chimera for soft lighting and Litepanels for battery-operated LED lights. He also likes the new plasma light fixtures that are replacing smaller HMI lights. A major manufacturer of plasma lighting is Hive Lighting in Los Angeles. 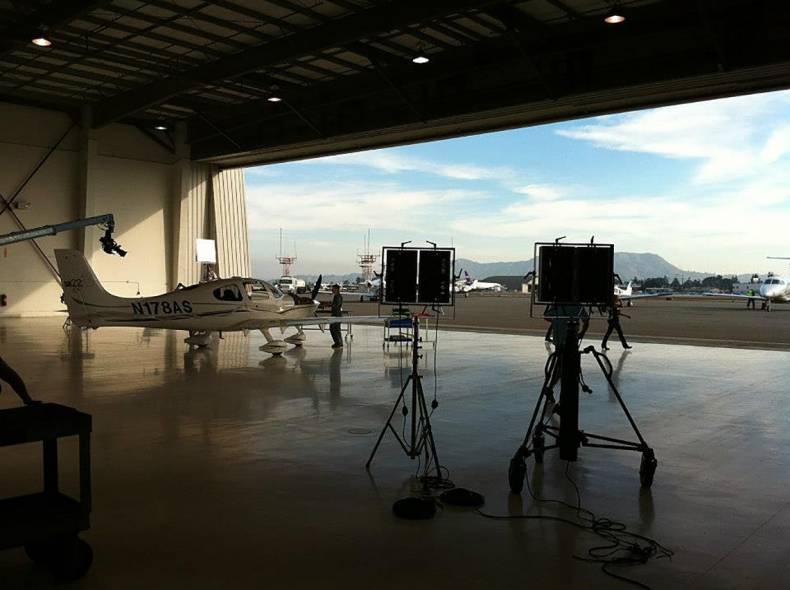 A plasma light offers many advantages. The Hive plasma shown here operates at 450MHz (220 million fps), the bulbs last 10,000 hours and they can product twice the output of an HMI.

“I see tungsten getting replaced in the near future,” he said. “Seventy-five to 80 percent of the energy that goes to a quartz bulb goes out as heat. It’s just so inefficient. It’s time to wrap it up for tungsten. It will be a while before HMI is replaced because it is the big power daylight source. We have 18,000-watt HMIs that are as bright as the sun. The manufacturers don’t have an idea yet how they can produce that much light with LEDs. But eventually HMIs will be replaced too.

“I still like and use fluorescents a lot. The output, the power and the price point is way lower than tungsten, though I like the quality of tungsten light and still use it. I use more fluorescent than LED just because I love the light quality. If I’m lighting a 50-year-old woman who wants to look gorgeous and turn to different cameras, it’s the way I go because I haven’t found anything in LED that matches the look for me.”

That said, LEDs have improved rapidly. “Brightness gets confused with quality,” said Holshevnikoff. “I’m a cinematographer and a lighting designer and, for me, it’s more about the quality of light and the color. I don’t care how bright it is. What has really changed is some manufacturers have really figured out the color. Five years ago, the color sucked. Now we’ve got brighter instruments that pull very little power. It’s becoming very usable.” The Arri L-Series takes full advantage of LED technology and allows for complete control over the color and intensity of light.

Holshevnikoff said there is a misconception about LEDs that they don’t put out any heat. “To the contrary, they put out a tremendous amount of heat. Designing an lighting instrument that manages that heat and doesn’t fry the electronics has taken the effort of a lot of people at Kino Flo and ARRI. Put your hand to the front of the fixture and you won’t feel it. But what’s coming out the back is quite a bit of heat. Some of the lights have fans built-in and when those fans kick in to keep the instrument cool, it draws power and the output of the light changes. There’s a lot going on that people aren’t really talking about. There are four or five vendors now making a good fixture. Most of the rest is junk, in my opinion.”

As to the quality of fixtures, Holshevnikoff said not everyone needs network or film-quality precision in LEDs. “People go online to B&H Photo to find cheap Chinese LEDs and buy them. I wouldn’t think that the color is sufficient for what I do, so it’s just a matter are they working for them? It’s what important to you, the color, the quality or whatever.

“The technology is changing by the month right now. It’s all going LED for sure. LED is just in its infancy and the very first really good lights are coming out now and starting to get refined. I don’t know about fluorescent. It’s still energy efficient and proven, so I suspect it will be around a while. But in 20 years, we’ll look back laugh at this time.”