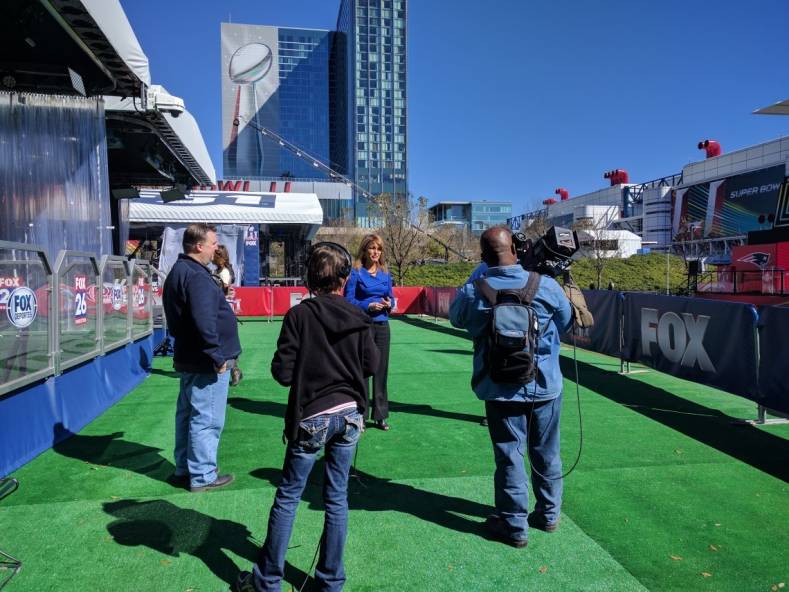 The glamor of TV sports journalists swarming and reporting from big pre-game venues is nearly impossible for visiting fans to ignore, but the real TV action on and off the field is invisible without a spectrum analyzer.

Super Bowl LI isn’t just a Sunday afternoon world championship game. it’s a week-long event that gets lots of TV coverage. Cameras and TV crews from around the globe are highly visible on the streets and in venues such as the NFL Experience at the George R. Brown Convention Center, NFL On Location, Media Row and team headquarters.

It is estimated that over 3,000 frequencies were used by over 10,000 radios at the week-long event. Some say wireless congestion before and during Super Bowl topped the crowded spectrum at LVCC during NAB. The only other planned events that approach this amount of congestion are national elections. In a sense, the Super Bowl is the ultimate annual real-world RF backhaul and communications field test for broadcast engineers.

RF problems during national football championship games aren’t unique to TV broadcasters. Last year during the AFC Championship game between the Broncos and Patriots in Denver, the Microsoft Surface tablets used by Patriots coaches to review plays quit working during the second quarter of the game. During its game coverage, CBS reported the issue was fixed by switching the tablets from wireless to a wired network. No one ever accepted blame or credit.

Cellular common carriers such as Sprint, T-Mobile, Verizon and AT&T respond well to planned events like the Super Bowl, knowing the increased cellular traffic World Championship sports crowds bring. The carriers bring in temporary cell repeaters and mobile cell sites to handle anticipated bandwidth. Over recent years the carriers have seen the effects of the band-hungry demands of streaming video and bonded cellular at such events. 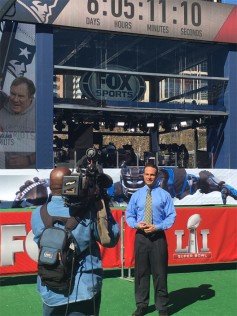 There’s plenty of appropriate background scenery at the event to liven up stand-up reports. Photo LiveU.

At the Super Bowl and other huge events, frequencies are typically requested when credentials are requested if not before. At Super Bowl LI, everyone using RF had to check in with a frequency coordinator. No TV crew was allowed to use RF at the stadium or away that was not already coordinated, except for 2GHz and 5GHz public Wi-Fi and common carrier cellular communications.

At this year’s Super Bowl, three frequency coordinators were dedicated to keeping crews using Broadcast Auxiliary Microwave Service bands and other licensed frequencies from accidentally interfering with each other’s signals. One SBE coordinator managed all RF within the NRG Stadium. Two others coordinated spectrum outside the stadium. One coordinated frequencies below 1GHz, the other coordinated those above 1GHz.

In addition to wireless mics and wireless cameras, TV crews also used spectrum for 2-way communication such as return video, prompter, IFB and crew communication and camera controls. That’s a lot of RF devices to track and monitor, and a number of spectrum analyzers were in place inside and outside the stadium for coordinators to do exactly that.

TV crews consisted of two groups. One was the TV network covering the game, which this year was FOX Sports. The other group was everyone else. At the game, FOX Sports used both unlicensed and licensed frequencies to connect mobile HD cameras to master control.

As with any large public event, the wireless spectrum is often difficult to guarantee for both the public and professionals. During the live game broadcast, nearly all eyes were on the FOX Sports production, and by then all frequency coordination issues would have been resolved. That was the plan, but it was still live TV.

Because live TV originated from multiple venues throughout the week, nearly everyone involved in spectrum use and frequency coordination held as much information as possible from the public before the game, as they should. Details are crucial and must be secret. However, be assured several frequency coordinators were on-duty all week and they had spectrum analyzers. 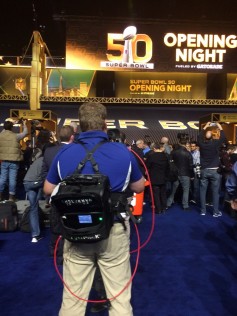 Not every wireless crew or camera at the event used a licensed private microwave system. Many used cellular, bonded cellular and/or public Wi-Fi for streaming transport or backhaul. SBE and the NFL were not coordinating those frequencies.

A public network bandwidth stress test occurs when crowds feed and stream video from their phones. The bigger the event within an event that motivates more people to post or live stream at one time, the bigger the bandwidth test pulse. This year, many streamed 4K. Every year the public systems bandwidth bar goes higher.

New technology is always a work in progress, but this wasn’t the first Super Bowl for bonded cellular and Wi-Fi video. For many manufacturers in those product categories, it has become routine. It has also become a unique real-world opportunity to confront and overcome significant RF and data congestion on local public systems. One manufacturer dubbed the recent US national election “a rehearsal.”

Equipment from virtually every manufacturer of bonded cellular video gear was used by someone at the Super Bowl LI event. Some of the largest manufacturers established a significant presence with credentialed staff at the event to ensure all their on-site customers had a good experience.

Both teams are from major markets where the local news stations use bonded cellular, and their newscasts often air simultaneously. Each company had a strategy to help those and others using its products at the event. Common goals included providing rental gear and tech support, additional bandwidth with private Wi-Fi hotspots, ensure customer’s modems were properly set to automatically log into those hotspots and let their products do their jobs.

While everyone believes the common carriers would provide adequate bandwidth for bonded cellular video throughout the event, one popular bandwidth-enhancing strategy was to build out private Wi-Fi networks at major venues such as the NFL Experience, NFL On Location, Media Row and team headquarters. The NFL Experience and NRG Stadium were said to be the two most Wi-Fi-active locations.

This was the fifth Super Bowl for TVU . “It has become routine, fun, big, and not all that difficult with our logistical footprint,” said Chris Bell, TVU VP of Technical Operations. TVU was hosted by a local Houston TV station and customer. The station is the temporary central location to warehouse rentals and spares, and to stage, ship and receive gear.

In addition to managing rentals, the LiveU team set up its Wi-Fi hot spots to be active all week, in event and team venues and on street level for live standups. The company arranged for high-speed internet connections at those locations and designed a private Wi-Fi system for those locations.

Each of the company's customers were dedicated a portion of available bandwidth at each Wi-Fi drop. LiveU has been doing lots of live events lately. According to Claudia Barbiero, LiveU’s VP of Marketing, Americas, “Unlike election day coverage, the Super Bowl is more spread out. There’s lots of running from place-to-place leading up to game day.” Run-and-gun is where portability and ease of use becomes most important. Once a camera has logged in, when it moves to the next location it will automatically find and log in to the next Wi-Fi hotspot.

Non-production members of LiveU station teams use the LU-SMART app on their smartphones, which feeds into their workflows. 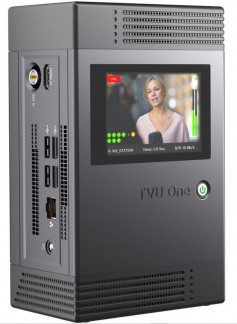 New software and optional router transformed the TVU One into a remote communications machine just in time for Super Bowl LI.

The extreme spectrum stress at the Super Bowl event was an opportunity to test or debut new products designed to overcome bandwidth issues. For example, “At the core of TVU is a mathematics and transportation company," TVU’s Bell said. As such, the company pushes numbers across networks. To that end, this year it brought its new router to the Super Bowl for its US debut.

Think of TVU Router as a Wi-Fi hotspot with up to 12 cellular cards providing up to 120Mbps bandwidth. It is like having a virtual high speed Ethernet connection in remote locations under any conditions. The Router can be either stand-alone or a software add-on for most of the company's live video transmitters. “It becomes a magical internet cable,” Bell said. That kind of reliable wireless connectivity can be scarce during the Super Bowl.

Another upgraded technology also debuted at Super Bowl LI was the new TVU ONE software introduced just three weeks ago. The new software pushes HD down to 1.8-3 MB/s without losing crispness. The new software is designed to move through heavy traffic with fewer difficulties Wi-Fi or cellular.

Teradek didn't plan a strong corporate presence at the event, but sales VP Jon Landman says the company’s products populated the venues. Last year Landman brought a new Teradek Bolt 3000 into the Super Bowl stadium. “I was given a specific frequency to use by the frequency coordinator,” he said. 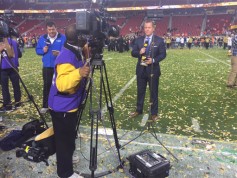 Its not over until the last sportscaster signs-off the last stand-up with "That's all from Super Bowl 51. Good night!" Photo courtesy Dejero.

The primary focus at Super Bowl LI at Dejero was equipment rentals. The company brought spare units, rental units and technical support staff to town to ensure customers’ success. Dejero also happened to have a Houston-based sales manager more than familiar with the territory. Super Bowls generate the more Dejero rentals than any other annual scheduled event.

Dejero Vice President of Broadcast Integration and Global Support Bill Nardi said his company was so impressed with the increased temporary cellular capabilities common carriers roll into the event, it won’t be setting up supplemental Wi-Fi hot spots this year. “We’ve had excellent Super Bowl cell service for the past three years,” he said. “We’ve set up Wi-Fi networks at previous Super Bowl events, but with the solid temporary cellular coverage, it turned out to be a waste of time.”

Bonded cellular isn’t the only game in town. Nardi went on to observe “There’s also lots of traditional TV with satellite trucks and stations from Boston and Atlanta anchoring live sportscasts from the event all week.”

Super Bowl LI is more television and wireless video in one place at one time than ever, all dependent on organization and cooperation. Tune in your local FOX affiliate this Sunday and watch how it all works out.