For the past few years, development of all LED lighting has been on a roller coaster ride. A beneficiary has been LED lighting for professional video. It has gotten better, cheaper and smaller — much smaller.

LED’s — or light emitting diodes — are solid state devices that emit light when electricity is applied. Though around since the first LED was invented in 1927, only in recent years has the development of the technology been on the fast track for pro video users. Now, it is one of the biggest trends in the imaging industry.

The reason LEDs are so popular is they are reliable, use little power, can be turned instantly “on” and “off,” run cool to the touch, are inexpensive to make, safe to use and nearly indestructible. LED fixtures work well everywhere, from studios to on-location shoots. Development is now so fast the new generation of lights are quickly pushing HMI, fluorescent and tungsten light fixtures to the side.

The biggest limitation is that most LEDs don’t yet put out enough light output to compete with HMI lights. That limitation, however, is changing fast as each new generation increases in brightness. Current LEDs can now output 10 watts, which allows increased brightness with fewer bulbs.

Research is advancing that will allow LED output to continue to increase. For example, researchers at Princeton University are using nanotechnology to increase the output of organic LEDs by 57 percent. This is achieved by developing new ways for the light emitted by an LED to be channeled from the diode.

VHO Pro emitters are color-correct and blend freely with legacy tungsten and fluorescent units as well as modern high-end LED fixtures from vendors like Arri and Mole Richardson. These are the first LEDs to bring high CRI, full spectrum color-correct white light to low-output LED products. Products like this help reduce the overall cost of LED fixtures. 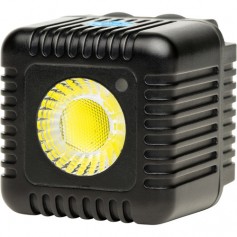 All this new technology development has translated into some remarkable new products, especially in the creation of compact LED lighting. A good example is the Lume Cube, a tiny 3.8 ounce, 1.5-inch by 1.5 inch cube-shaped LED light that is dimmable between zero and 1,500 lumens. It runs on USB power or an internal battery that charges in 1.5 hours.

The Lume Cube can attach to any kind of mount and uses an iOS or Android smartphone app to adjust the brightness and other parameters of one or more lights. It has 5600K color temperature and can work under water to a depth of 100 feet. Lume Cubes cost $79 each.

Lume Cube began on Kickstarter and now the company is doing a second Kickstarter campaign to raise money for an even smaller fixture — the Life Lite. It’s only 1.5 inch by 1 inch and weighs 2.5 ounces. It has an output of 350 lumens at three feet.

Another new compact light is the Italian-made Relio, which emits 200 plus lumens of 92 CRI white light. For specific users, a colder 3500K and 4500 CCTs are available for 96 CRI.

The Relio is powered by USB and can use portable batteries. The device has professional grade TIR (total internal reflection) optics that are said to extract light without artificts. Color evenness is almost perfect, the company said.

Machined from hard-anodized aluminum and sandblasted by hand, each Relio light weighs 2.7 ounces and is priced at $87. 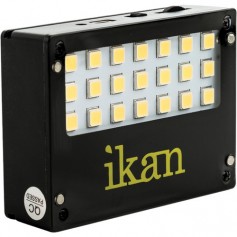 Another tiny pair of lower-cost fixtures are Ikan’s iLED-MA Micro Flood and Micro Spot lights. The Micro Flood ($38.00) has a color temperature of 5,613K with a 120 degree beam at three feet. It has a dimming wheel, a CRI of 93, an internal battery and weighs 4.8 ounces. 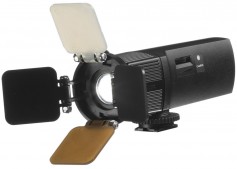 As video equipment gets smaller in size and more light sensitive, these compact LED fixtures make a valuable portable companion. In multi-light kit form, they are extremely light in weight to carry and many manufacturers have created highly portable systems that can go anywhere.