In early 2001, Patrick Grosswendt was working as a gaffer on Robert Altman’s Gosford Park, a murder mystery that was in production at Shepperton Studios in Surrey, England. Like so many creative people working behind the scenes in film production in the pre-digital era, Grosswendt was constantly thinking of how the process could be improved.

What Grosswendt didn’t know at the time was he and a group of five other filmmakers and engineers would found a company within a year that would evolve into a major pioneer in a new kind of lighting for the future — LEDs.

At the time, LEDs were used mainly for utility lighting and things like panel indicators. Their color temperature accuracy was in a primitive stage, and the technology was just starting to show promise. It was the beginning of the digital age and Grosswendt and his friends were tinkering with using LEDs for film lighting.

Litepanels, the company, was formed in 2001 for the making of an LED ring-light. “It came out of necessity, like most things in the film business,” Grosswendt recalled. “Necessity was the mother of invention.”

Grosswendt was immersed in the filmmaking culture. His father-in-law is Earl Gilbert, himself a legendary gaffer whose film credits include The Graduate, Catch-22, Chinatown, and Justice for All, Norma Rae and Close Encounters of the Third Kind. Among the directors of cinematography that Gilbert worked with was Robert Surtees, who shot The Graduate.

“I learned from Earl how you had to understand what the technology of the time was capable of and understand the values,” Grosswendt said. “When you start going to sets, you begin to see the different values people are working with and how they can force perspective into a deep background with just a small pinpoint of light aimed at the camera from one or two blocks away. Earl would tie into high power lines and drop connectors and put up master lights. People like Surtees were always pushing the limit of the technology and that greatly influenced Earl.” 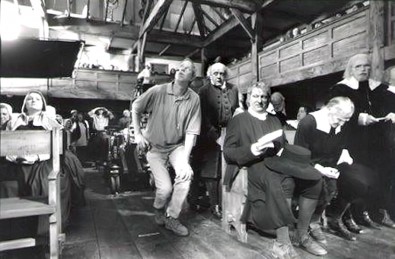 Patrick Grosswendt, in the center, works as a gaffer on the set of The Crucible in 1996

That knowledge of adapting to the technology of the time is a major driving force in making LED fixtures at Litepanels today. “People with the knowledge and those who are learning it have technology today that was not available 20 years ago,” he said. “Things like battery operation, high color quality or the mixing of colors by turning a knob rather than having to change gels are major developments.”

As LED technology progressed, the fixtures have consistently improved. Litepanels always carefully selected the LEDs it used and paid special attention to managing the heat and current use that ensure long term, stable operation. While cheaper LED fixtures add more green phosphor to get a higher output, those lights also give a sickly, green look to subjects on camera. Litepanels has always avoided that, ensuring color balanced performance that looks good on the screen.

“We’ve always tried to stay away from green in our lights,” Grosswendt said. “Unless you are Ridley Scott doing a submarine movie, one doesn’t look for green in the imagery. The more green phosphor you add to the daylight mix, the brighter the light is. Sometimes you see a light and its so bright it blinds you. But the reality is the quality of the light falls upon the subject.”

The transition from five millimeter LEDs to surface mount technology enabled the current generation of 1x1 Astra lights from Litepanels. These fixtures are four times brighter than the previous generation of panel lights and the control and management of the bulbs is far better. The phosphor mix is also improved, allowing greater precision in the daylight and tungsten spectrum. 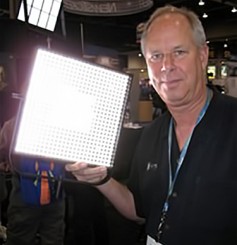 But beyond the pure LED technology in the fixture is what Grosswendt and his filmmaking friends brought to the table: that is how to design lights for use by people on real, working sets.

“All of us at Litepanels, from our past experience, understand that the evolution of lighting has changed and will continue to change. When you think about digital cameras with extremely fast lenses that need very little light for exposure and a very sophisticated camera chip that easily recognizes light levels and color densities, it’s not about how much light you have anymore. It’s about how you control that light and where you put it,” Grosswendt said.

For Litepanels’ latest Astra soft bi-color LED panel, Grosswendt noted, the LED technology itself had been refined across the product line. What was most important in the new design was differentiating the fixture to create a soft light that working professionals could successfully use in the field.

“Diffusion, no matter what it is, is relative always based on distance from the source,” he said. “We chose a softening material at an extended distance from the LEDs that created a very homogenized, even effervescent, soft effect. We were very specific about the distance and the material used.”

That attention to creating lights for different needs has contributed to the success of Litepanels. “You can bounce our lights on the floor, the ceiling, the wall or you can put them in a four-by-four frame of diffusion,” he said. “The light can take on all different dimensions based on how you use it. For people who have adapted to our Astra products, it gives them more freedom to not be tied to traditional ways of making imagery.” 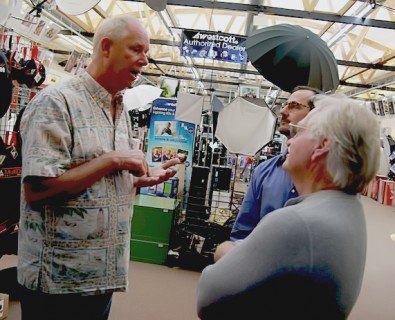 In 2008, Litepanels was purchased for $14.5 million and other incentives by Vitec, keeping the founders at the company. During a flood of copycat LED lighting technology, Litepanels, under Vitec ownership, sued to enforce their patents in film and video lighting. In 2013, the federal courts confirmed those patents, solidifying the claims of the company for its pioneering role in LED technology for video and film.

The LED technology covered in the patents includes full spectrum, white light emitting diodes and included thermal management, precision of color temperature, smooth and flicker free dimming and the requirements for alternate power input capability. In the suit, the company claimed there were a number of technical challenges that had to be overcome before LEDs could be employed effectively for image capture. The court agreed.

So what’s ahead for LED lighting and Litepanels? Grosswendt wouldn’t say specifically what his company is working on. But he did speculate on the future.

“I would like to see the day when you can take an aerosol can full of quantum dot technology and spray it on a wall and electrify it with two small electrodes off a battery pack,” he said, only half jokingly. “That would become your source light. When you’re done you’d just wash it down off the wall and you are off to your next location. Of course, this is just all in my mind for now!”