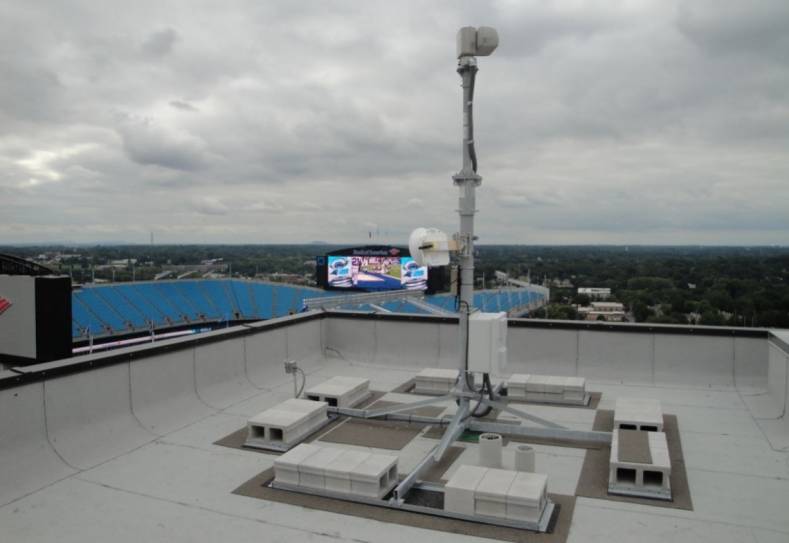 The Carolina Panthers use a 60 GHz VidOwave transmitter to transport real-time, uncompressed HD to a studio several blocks away.

RF modulation is the ink of broadcasting. Broadcasters understand RF and get government licenses to transmit on assigned frequencies. They depend on the government and local frequency coordinators for interference-free privacy. The latest, most popular emerging RF systems are unlicensed and operate in extremely high frequency (EHF) public Wi-Fi bands. The key word is public. How does a broadcaster find privacy on a public band?

There’s a long list of successful modern commercial technologies with roots in military and federal laboratories and applications. One of the most recent is broadband microwave. It seems government, Hollywood and broadcasters are the markets most interested in investing money to move large amounts of live video data wirelessly.

SMPTE 2022-6, NewTek's NDI GigE and other ideas transporting uncompressed video on inexpensive GigE or better networks, are making it possible for users to begin to embrace uncompressed HD over IP. SMPTE 2022-6 removes any overhead and packetizes the video without using compression.

Does every SDI signal require full bandwidth? The answer depends how loaded the signal is.

The discrepancy between the calculated bandwidth and the SMPTE specification is allowance for up to 16 embedded 24-bit audio channels each at 48 kHz, full loads of metadata, other ancillary data and error detection in a single HD-SDI stream.

The same signal can be compressed and transported over less-expensive lower bandwidth connections, but the processing compromises the production with delay, compression artifacts and other uncertainties.

The time it takes for an image to get from a lens to a destination and its purity compared to the uncompressed original is the essence of what makes RF video transport systems different.

Deciding what wireless system is best for the application begins with frequency selection. The 5.8GHz band is very popular and inexpensive to use, but the band is public and can be highly congested. The potential of sudden unknown interference source may present more risk than a broadcaster wants to take.

The best tools to counter interference are a spectrum analyzer, antennas and frequency. According to VidOvation VP and CTO Jim Jachetta, “Directional antennas at higher frequencies create a little tunnel through the air.” At any high frequency, the more directional the RF beam and antenna is, the lower the interference.

The IEEE defines the extremely high frequency (EHF) band as 30-300 GHz. Wavelengths are 1cm to 1mm, nearing the wavelength of Far Infrared light. The “Millimeter band” is a common nickname. New technology is making solutions available in the public 60 GHz band, as well as the 70/80 and 90 GHz bands, including Ethernet links that support bi-directional GigE speeds. 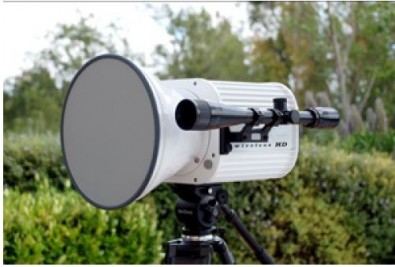 The higher the frequency, the more narrow the RF path tunnel aperture of high gain antennas. The aperture of a 30cm diameter antenna is inversely proportionate to its frequency. A 60 GHz wireless system has a transmission narrow beam aperture of approximately 4°. At 2.4 GHz, the beam is 117° arc. The nearly pencil thin 60 GHz beam makes it possible for devices to be used in close proximity of each other without interference. Limited propagation and signal security at 60 GHz makes it attractive to the military and DOD.

Directional antennas at such small wavelengths tighten the beam both horizontally and vertically. High-gain antenna links operating a few stories above the ground are less susceptible to ground-based interference. The downside of tiny wavelengths is that the higher the frequency, the less the signal will penetrate anything, including air or rain. 60 GHz is the least susceptible to rain and fog compared to 70/80 or 90 GHz. EHF tends to act like light but is somewhat less sensitive to challenging weather conditions than free space optics transport such as Laser light or LEDs.

One of the latest public bands to open in the US is 60GHz, also known as WiGig. At 60 GHz, RF propagation gets a little different. It happens that 60 GHz is the peak absorption frequency of oxygen, which predictably attenuates signals and makes it particularly unique for private communication on Earth. In space, 60 GHz is a popular band because there is no oxygen attenuation and narrow beams keep communication private. 60 GHz signals originating in space are absorbed and dissipated by Earth’s atmosphere.

In 1994 the FCC first proposed an unlicensed band at 57-64 GHz. In 2006, the WirelessHD Consortium was founded in collaboration with LG, Panasonic , NEC , Samsung , Sony and Toshiba . It soon expanded to include Intel , Broadcom and Philips N.V. In 2009, IEEE formed a task group “ad” within its 802.11 working group to develop standards for WLANs known as 802.11.ad. In 2011, channelization was approved by ITU-R WP 5A for global standardization.

The FCC announced Part 15 Rules for Unlicensed Operation in the 57-64 GHz Band in 2013. The Report and Order limits average and peak power density in the band equivalent to average and peak EIRP limits of 10 W (40 dBm) and 20 W (43 dBm), respectively.

In the US, the 60GHz band has 7 GHz of usable spectrum between 57-64 GHz, divided into three channels, each with 2.16 GHz of spectrum. In Japan and the EU, the band extends to 66 GHz, allowing a fourth channel.

In China, the band is limited to 5 GHz precluding channels 1 and 4. The band in Australia is only 3.5 GHz only fully covers Channel 2, with a center frequency of 60.48 GHz. Because Channel 2 is globally available, it is considered the default channel in the 60 GHz band. Otherwise, the 60 Ghz band is globally unlicensed, making 60GHz systems operating on Channel 2 useable anywhere in the world without a permit.

The WiGig Alliance helped advance the course of 60 GHz.

The Wireless Gigabit Alliance (WiGig) was announced in 2009 and merged with the Wi-Fi Alliance in 2013. WiGig enabled devices can deliver data transfer rates up to 7 Gb/s and maintain compatibility with existing Wi-Fi devices.

According to the Wi-Fi.org, WiGig is “a multi-gigabit, low latency connectivity coming in 2016. Popular use cases for WiGig include cable replacement for popular I/O and display extensions, wireless docking between devices like laptops and tablet, instant sync and backup and simultaneous streaming of multiple, ultra-high definition and 4K videos.” 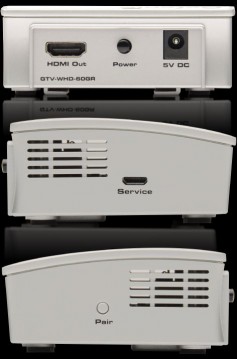 The Geffen wireless HDMI extender operates in the 60 GHz band.

60 Ghz signals are very well suited for an enclosed area. 60 GHz doesn’t penetrate walls but it can bounce around an enclosed space. Gefen, for example, recently introduced a wireless HDMI extender operating in the 60 GHz band. It extends HDMI 1080p HDMI wireless video up to 10 meters. A couple of consumer 60 GHz HDMI extenders have also recently appeared on the market.

The RF envelope from a directional 60GHz antenna is nearly pencil-thin. At unlicensed power levels the 60GHz signals are predictably limited to line-of-sight a distance of approximately 600m or 2000ft, indoors or out. The downside to 60GHz is that it demands line-of-sight and a leaf or a human body will shadow the signal. It is also sensitive to Doppler shift, even at walking speeds.

Is the 60 GHz band the wideband Wi-Fi end-all, a new broadcast tool or both? While 60 GHz gear begins appearing on the market and the crawling technology begins to walk, Moore’s Law is still very much at work. Plans and prototypes for the 100 GHz band are already in progress. On the other hand, spectrum is limited by physics and nature. The only other new spectrum on the horizon is the about-to-be-auctioned 600 MHz TV band, which isn’t enough for uncompressed HD or better video transport.

Every wireless video production and system is unique and most projects can’t wait. The best choice depends on the application, budget and the technology available today.

The author wishes to thank VidOvation VP and CTO Jim Jachetta for his assistance preparing this article.