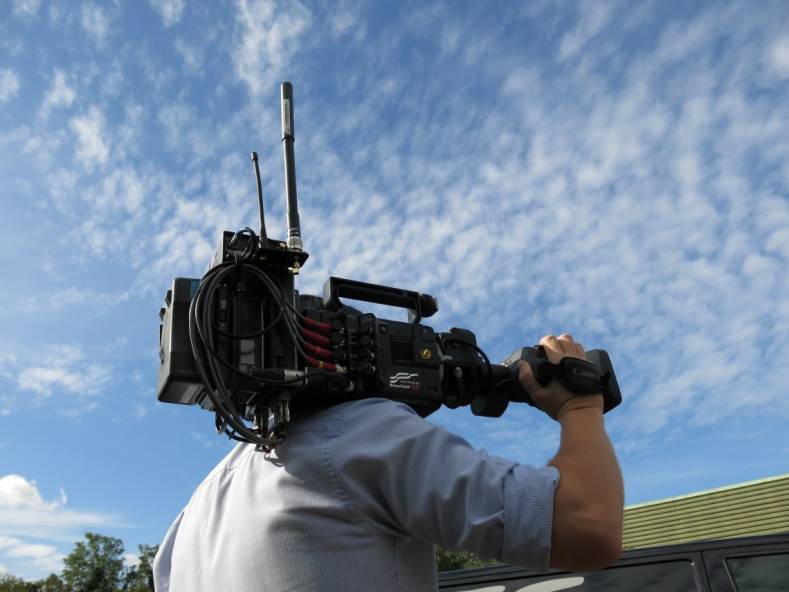 One of the missing pieces in the 4K live acquisition is being cracked with a number of options now available to send pictures wirelessly from pitchside.

Broadcast RF claims the first UHD radio camera system available for hire. The 4KRF system comprises of a Sony F55, a full transmit and receive system for live broadcast. It is offered with technical support if required for live events. It uses the system on a live heli downlink working with Aerial Camera Systems to obtain live 4K broadcast from the air.

The system mounts to the back of a 4K camcorder such as the Sony F55 like any other radio camera transmitter and includes full Sony RF camera/paint control.

It is based on the new UitraCoder HEVC/H.265 encoder from Vislink. The system accepts 4K/UHD streams on a Quad 3G-SDI input. While other approaches use four separate encoders/modulators to individually encode and transmit each quadrant of the UHD picture, the 4KRF system processes the entire 4K picture through a single encoder/modulator chain, thus increasing encoding efficiency and eliminating any possible synchronisation issues between the individual quadrants.

BBCR&D has chosen to use Multiple-input Multiple-output (MIMO) wireless technology halving the bandwidth required and therefore significantly reduce the cost of news and sports coverage. Its halfRF HD/UHD radio-camera incorporates knowledge of DVB-NGH and DVB-T2 and also uses error correction and time interleaving to provide a rugged system that transmits 4K over a130Mb/s link. This is still prototype with tests planned at a soccer match. There's a minimum 4 frame latency. The BBC plans to licence the innovation to camera manufacturers.

GoPro has a backback or tethered Hero model engineered with Vislink's HD RF link (branded HeroCast) for live broadcast. The latency is 180-200 milliseconds. The Hero4 Black is GoPro's 4K camera and while 4K can't yet be streamed from it live the company says it is looking at this.