An operator at the MLB Replay Center, in New York City, monitors dozens of games simultaneously during the season.

Thanks to advances in IT technology and IP connectivity, sports fans are enduring less wait times for disputed plays to be reviewed and the “right call” to be made.

Indeed, Major League Baseball (MLB), the National Basketball Association (NBA), the National Football League (NFL) and the National Hockey League (NHL) have all implemented remote “command centers” where league officials, located many miles away, stand at the ready to help the on-field referees make the right call. The goal is to cut down on the wait time and improve the fan viewing experience.

If you ask any avid sports fan, and maybe some casual observers as well, the biggest problem with instant replay reviews during live sports games is that the referees, or more recently umpires, take too long to make a call—essentially killing any team’s momentum in the process.

To combat this, the MLB leverages its Advanced Media’s Replay Operations Center (ROC), located in New York City, the NBA uses it’s Replay Center at its Secaucus, NJ headquarters, the NHL uses its Situation Room located inside its headquarters on the 10th floor of the office tower attached to the Air Canada Centre in downtown Toronto, Canada, and the NFL weighs in on replays from its Command Center in New York. In fact, the NHL was the first league to institute remotely reviewed replays in 2013 and the rest of the leagues followed soon after.

“One thing that a central location does is it brings consistency to your calls,” Mike Murphy, senior vice president of hockey operations, told the Canadian Press. “So the call you get tonight is probably going to be the same as the call tomorrow night or the next night because it's the same people doing it.” During live games for any of the professional sports leagues, a disputed call is reviewed by the remote officials and then on-site by the game referee/umpire and the two confer via a short phone call.

Again, the goal is to cut down on the wait time. League officials have said the majority of reviews take 60 to 90 seconds, although close calls with inconclusive camera angles could easily take longer. MLB’s average wait time for a decision during the 2014 season, for example, hovered around 2 minutes and 14 seconds.

“[We’ve created] a central location where we’ll have people there who will be watching every game,” NBA president of basketball operations Rod Thorn told ESPN.com. “When the referees go over to the side, in many instances the [central replay center] will already know what happened and they’ll be able to tell the referee, which will hopefully take less time.”

For example, each MLB ballpark is equipped with a Clear-Com HelixNet Digital Networked Intercom combined with HKB-2X user stations and HBP-2X belt packs to support communications for the field umpires, ballpark replay technicians, the broadcast truck supporting the game, and the scoreboard official in the ball park. The HelixNet HMS-4X base stations are interfaced to Clear-Com VoICE2 IP interfaces which connect to each of the ROCs. 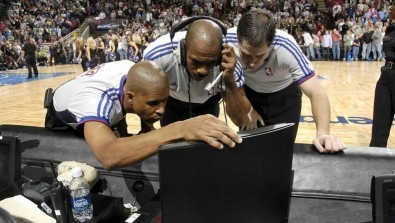 Referees at courtside, wherever they may be, confer with officials located in Secaucus New Jersey.

Within each ROC’s equipment room is a compliment of VoICE2 units that work in tandem with an Eclipse HX Digital Matrix Intercom system. Umpires and replay technicians in the ROCs have V-Series user panels that allow them to communicate with any or all of the games in progress.

Every MLB telecast feeds 12 to 15 camera angles to the ROC in New York, split between the home and away teams' TV truck feeds. Those videos also go to each team to help them decide when to challenge calls.

Similar two-way communications systems are now in place for the NBA, NFL and NHL as well.

The NBA’s state-of-the-art NBA Replay Center gives officials numerous enhanced views of the action, which encourages a faster decision. The center features 94 HD monitors (14 for replay operators around the outside and four for replay managers and two for content management and social media on the interior) and 20 Evertz DreamCatcher Replay system workstations.

A single replay operator is designated for each game, proactively reviewing and tagging video for potential reviews (and later repurposing of highlights).  Multiple camera angles can be location pieced together and instantaneously streamed to the referee crew chief on the court, who then make the final call.

The NFL’s Replay Central room inside the Command Center in New York works in much the same way, monitoring the feeds from every game while communicating with officials through headsets as referees view replays on sideline monitors. 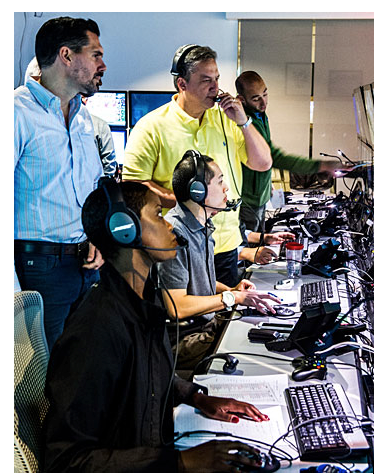 In all of the leagues’ cases, the on-site referees/umpires still make the final calls on plays.

Dean Blandino, the NFL’s vice president of officiating, told USA Today, “It's still a referee review; he has the ultimate authority. We'll come to a consensus. We're certainly not going to let him make a mistake, but the referee has the final authority on the call.'”

Blandino said the system allows plays in question to be evaluated by those at the league office even before referees make it to sideline monitors. Once at the monitors, referees could then communicate with Blandino and his staff. They will typically review about five different camera angles before making the final call.

Replay Central in New York will not only cue up the right replays for the refs to see. Blandino is also able to tell the on-site game refs when a replay is obvious—either right or wrong—and so when the ref gets under the hood he won’t have to waste time looking at every angle of an obvious call.

In all cases the technology involved (replay systems, a direct intercom line and multiple views of the same play) is clearly making a difference… most importantly to fans watching at home.