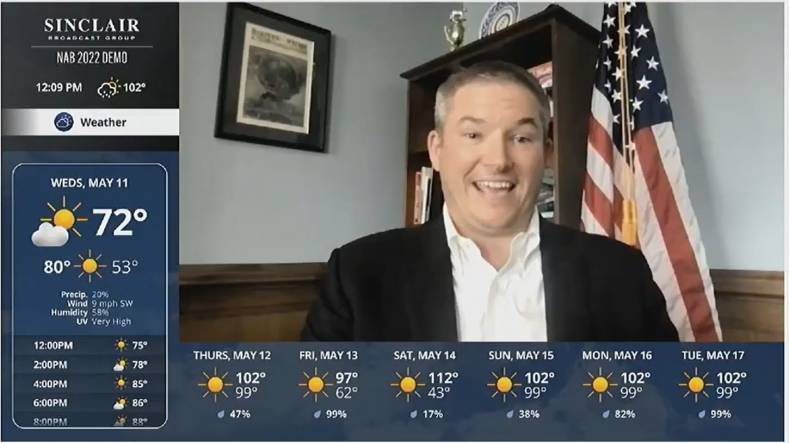 In functions within the Sinclair App, program content is squeezed and overlays a html page that can be updated live. Courtesy NAB.

TV engineers visiting NAB Shows often find the BEIT sessions and papers to be the highlight of the event. There is no better venue to see and hear what the upper echelon of broadcast technology experts are reporting.

In his opening remarks, Sam Matheny, Executive VP, Technology and CTO at NAB said that 2022 was the 76th annual BEIT Conference. BEIT has been challenged by holding no physical event since 2019, although virtual events were held in April 2020 and last October. This year, all preparations had to be done remotely and a new West Hall was the new BEIT venue. The sessions spanned 4 days, with 20 sessions presenting 48 papers, plus presentations by BEIT education partners SBE, SCTE and NABA. Nearly a quarter of those registered for NAB came from outside the US.

Matheny directed his opening session audience to visit the Futures Park booth featuring exhibits of tomorrow’s technology today, before it is commercially available. One exhibit was the NextGenTV Korean Alliance with demonstrations including a prototype 8K system. The Ultra HD Forum had several demonstrations in Futures Park including advanced ATSC 3.0 scalable HEVC encoding. Futures Park also showed a live, broadcast HD image and using broadband to combine the HD OTA image with a 4K enhancement layer via the internet to deliver and reconstruct 4K UHD with HDR in the TV set.

Another exhibit Matheny recommended showcased a live ATSC 3.0 datacast of Realtime Kinematic Data (RTK) in conjunction with Differential GPS (DGPS) to improve nominal GPS accuracy to about 1-3 centimeters, which is approximately 100x more accurate than GPS alone. It was used by an aerial drone to fly a precision delivery route, and it has significant implications for many solutions, from autonomous vehicles to smart cities.

Curtis LeGeyt, President and CEO at NAB, noted the media landscape is constantly evolving and announced seeing significant NextGen TV momentum from consumer electronics manufacturers, TV broadcasters, and professional equipment providers. LeGeyt was particularly excited about the opportunities ATSC 3.0 offers, from UHD and datacasting to SFN possibilities and interactive broadcast TV. He also praised broadcasters for their role in providing local communities with life-saving information during the pandemic.

Lynn Claudy, Senior VP, Technology at NAB, presented the 2022 NAB Best Paper Award to two winners. One award went to John Schadler at Dielectric’s paper “Changing the Landscape of FM Broadcast Antenna Technology.” The other winner was “ATSC 3.0 as a Use Case for Public Safety Communications – Developing Milestones,” written by several authors, led by Fred Engel of PBS North Carolina.

The “NextGen TV Trends: Lessons Learned from Pioneering and Groundbreaking Application Examples” session featured papers from three speakers, each a recognized industry expert. First was Francesco Moretti, Deputy CEO & CEO International, Fincons Group. His company’s business is assisting to a global move towards a new form of TV: Interactive, participative, personalized and addressable. Fincons Group supports customers during the life cycle of an IT initiative, from concept to requirements to implementation, either custom or implemented by the vendor.

Moretti notes Fincons innovation of the Univision ATSC 3.0 Broadcast App was awarded NAB Show 2021 Product of the Year. His company has been active in Hybrid Broadcast Broadband TV (HbbTV) for many years. HbbTV has been popular across Europe since German RTL Television began using it in 2010. The EBU supports the HbbTV initiative and calls it one of the most exciting developments in media. HbbTV is a unified standard allowing content owners and app developers to deploy one product or program in many countries. Bridging Linear TV and OTT enhances user engagement and monetization.

In the USA, Fincons partnered with NAB and delivered the first Broadcast App to the NAB. The Broadcast App uses the ATSC 3.0 standard to merge channel info, channels list, EPG and VOD. It also provided NAB with a “Hybrid binge-watching app” allowing Live-to-VOD and VOD-to-Live functionality for fragmented audiences. Fincons also developed a cooking show app for a CBS Saturday morning segment called The Dish. It also contributed to the redesign of the Sinclair ATSC Broadcast App UI/UX. In conjunction with NAB and E.W Scripps, Fincons developed the Scripps News Literacy Project App. The company has also developed custom Broadcast Apps for Univision, Howard University and NESN.

Mike Kralec, SVP, CTO, at Sinclair Broadcast Group (SBG), began his paper by stating that SBC is currently on the air in ATSC 3.0 in 29 markets, operating as the host ATSC 3.0 station in 20 of those markets. By July, SBC plans to be broadcasting ATSC 3.0 in 33 markets and be the 3.0 host in 24 of those markets. Industry wide, SBC is in 49 markets. He said nearly 90% of US homes have broadband and 82% have at least one internet-connected TV device. Almost 40% watch TV daily on a connected device. Based on current trends, Kralec sees NextGen TV set penetration about doubling every 6 months and he believes that number will go up with time.

Kralec said SBC is gathering metrics from its broadcast app. SBG can embed a Google analytics code to get analytics data back from the application that allows SBG to see what market a viewer is in and what program they’re watching. It is fully anonymous, but SBG now has access to first-party viewer data it never had before. 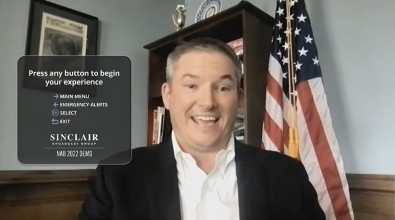 When the SBG broadcast app is delivered to the viewer, a pop-up menu appears on the screen. The menu disappears after 10 seconds if the viewer does nothing. Courtesy NAB.

Kralec said it is important to work with consumer electronics manufacturers to understand how they are supporting the A/344 specification, but the SBG Broadcast App is device agnostic. It reminds him of the early days of HTML on the internet when different browsers rendered websites differently. There’s a lot of standardization work to be done, he said. The latest version of A/344:2022-03 was approved on 31 March 2022. Not all NextGen TV sets support A/344, yet. The industry does not have consistent support for small persistent local TV set storage to maintain user preferences such zip code for accurate alerting and viewer-controlled alert priority settings.

At the 2022 NAB Show, SBG offered an open-sourced version of its Broadcast App to the entire broadcast industry. It is being offered for free via an MIT Open-Source license to all programmers in the ecosystem. Broadcasters will be able to deploy the open-source broadcast app on a standalone basis or, to maximize potential, extend the capabilities with a connected platform. This platform can be developed by the broadcaster or in partnership with Sinclair.

In a recent press release, Kralec said “Encouraging all broadcasters and other programmers to customize their offerings on a common App will significantly hasten the adoption of NextGen services.” The SBG Broadcast App was demonstrated in the ATSC exhibit.

Jim Stenberg, EVP Transmission Infrastructure, Signal Infrastructure Group talked about the full utilization of ATSC 3.0. His overall point was that signal levels decrease by distance squared from the Transmitter. He said digital signals can only be received above a given s/n ratio (aka the digital cliff). Higher content quality and quantity (more bandwidth) reduces coverage. As bandwidth increases, so does the signal to noise requirement for reception. 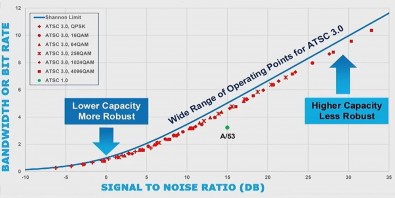 More data in the digital pipes makes the signal more difficult for the receiver to decipher. Courtesy NAB.

Stenberg used the example of coverage of the Dallas market with a single antenna broadcasting ATSC 3.0 at 25Mbps vs the same single antenna broadcasting ATSC 3.0 at 4.97 Mbps. The coverage at 4.97 Mbps nearly filled the predicted contour, reaching 6.6 million Dallas market viewers. The same signal at 25Mbps covered 1.1 million fewer viewers because the receivable signal filled less than half the predicted contour because the higher bandwidth of the signal requires a higher s/n ratio at the receiver. Stations can fill in the gaps and edges with lower power, lower antenna, SFN transmitters. ATSC 3.0 keeps the transmitters in sync at the receiver.

He said ATSC 3.0 can overcome terrain blockage, urban sprawl, sports, neighborhoods, and highways by covering vehicles in motion. Many of those issues can be resolved with strategically placed SFN transmitters. Even TV stations with the tallest towers and highest power are learning that ATSC 3.0 signal coverage is inversely related to the signal bandwidth.

Graphics from the 2022 NAB BEIT Conference reprinted with permission from National Association of Broadcasters, © 2022.