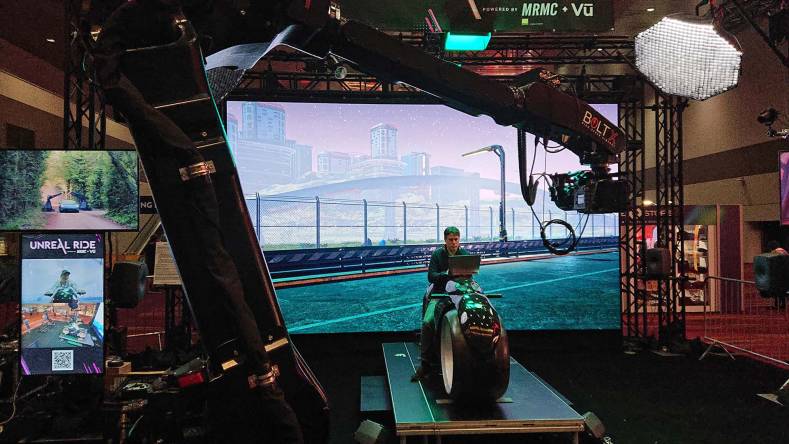 Virtual production was everywhere at NAB. Kicking things off, Mark Roberts Motion Control staged a demo at the main entrance to the LVCC.

NHK, which actually showed the first prototypes at IBC 2014, called it a “New era of full-scale super high vision.”

In America, broadcasters generally scoffed at the higher-resolution idea, in lieu of the fact that they don’t have the capability of passing a 4K signal though their facilities, much less 8K. Also, most consumers are unlikely to enjoy the immersive experience anytime soon. Only 1 million 8K TVs were sold globally in 2021, according to Strategy Analytics, which is predicting that about 72 million households worldwide will have an 8K set in 2025. That’s a fraction of the 1.7 billion homes with TV sets in the world.

A mere four years later, 8K has been embraced not so much for distribution but as a creative tool for feature film production, whereby new sound stages are outfitted with large LED screens as backdrops and actors interact with virtual sets in real time. It’s even utilized at various sports stadiums, like Levi's Stadium in Santa Clara, Calif. (home to the NFL's San Francisco 49ers), where they have equipped their entire replay system with 8K cameras in remotely controlled weatherproof housings (from Telemetrics) around the field. 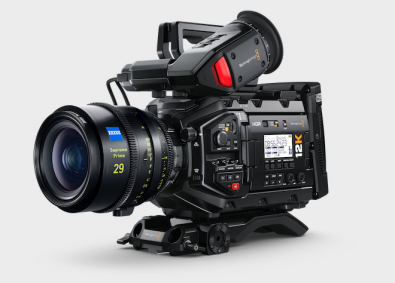 Blackmagic’s Ursa Mini captures 12K video that can be repurposed for a variety of “downrezed” applications.

Some of the effects are now being composited inside the camera, due to the large amount of data that is being acquired. Indeed, 8K technologies are playing a growing role in efforts to improve the way HD, HDR, and 4K content is produced today. Being able to capture in 8K, and then master in 4K, is a solid value proposition that justifies the equipment’s higher sticker price.

Virtual production and volumetric video capture (VVC) refers to creating 3D CG from images taken by multiple cameras, and using this data to produce video that looks like it has been shot at a real location. Dedicated studios that cater to this market are popping up around the world as production companies see the value and efficiencies it brings.

Looking around the show floor, this area of the business is very hot right now and was a major focus of this year’s NAB Show in Las Vegas. To kick things off, Mark Roberts Motion Control staged a live demo of its Bolt robotic camera arm and Sony Venice 8K camera whirling around a static motorcycle in front of a virtual LED set at the main entrance to the LVCC—where attendees could get their picture taken in a virtual world. For many, it was the first time they had seen such a set up.

Basically, the technique is an evolved version of previously used methods of displaying live images and graphics behind the cast, using traditional virtual set technology. Only now you can acquire a full 3D model of the subject and manipulate it in post like never before. Every frame is usable and can save the production time and money when an actor has to be replaced or a camera angle needs adjustment. 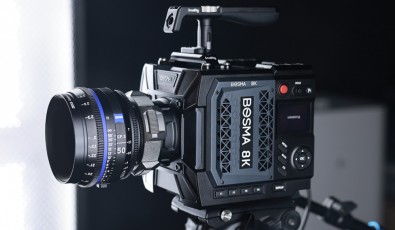 The new sweet spots for the high resolution images shot with these cameras are large LED display walls and studio backdrops, as well as augmented and virtual reality (VR) and a wide range of creative post-production applications. From a single 8K frame a number of lower resolution copies can be derived for distribution to the multitude of home and mobile media playback devices.

Major TV/movie productions like Disney’s “Mandalorian” are now using virtual production workflows, shooting live-action scenes against a large LED screen on a soundstage outfitted with volumetric video capture technology. Employing this technique, production and postproduction costs are significantly reduced and it allows actors to immerse themselves more into the scene. The production team has designed and built a large LED video wall, designed by Industrial Light & Magic and Lucasfilm Ltd. especially for Mandalorian, that consists of 1326 LED screens (made up of 2.84 mm pixels). The height of this wall, called “The Volume/StageCraft” is 20 feet, width is 75 feet and is 270 degrees around.

More Bang For The Pixel

“Acquiring in 8K gives you more options in postproduction and in-camera Vfx,” said David Hoffman, Business Development Manager for the Americas at Blackmagic Design. “It’s really a hybrid Broadcast and cinema workflow. Multi-cam in-camera compositing allows the user to adjust the images to what the director wants to achieve.”

The main focus of Blackmagic’s 8K product line is in the areas of acquisition and postproduction. This includes its Ursa Mini Pro 12K camera (which records in 12K Blackmagic RAW; also at higher frame rates with lower resolution that “looks great.”), the HyperDeck Extreme 8K HDR, used for recording and playback of 8K material, a full line of Teranex mini 8K SDI-to-HDMI converters, the DaVinci Resolve color corrector/production system, and a line of DeckLink I/O PCIE cards (for ingest and export into and out of a real time processing system like Unreal Engine). 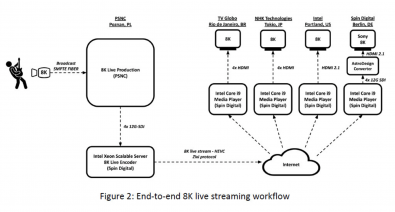 The 8K Association showed a number of methods for distributing 8K content, including live streaming.

The Teranex 8K SDI converters are used to convert the 8K (or 12K) signal to a display port or HDMI 2.0 signal for display. Some people are also using it to record back plates for the studio LED walls and they can recall them at a later date when needed.

“When we look at the resolution capability that the average human eye can see, I don’t think going above 12K is going to make any difference to the consumer,” said Hoffman. He added that most people are not shooting 8K for distribution, they are shooting it for full resolution data acquisition, giving the team more creative decision in postproduction.

The Ursa Mini Pro 12K camera, with its a 12,288 x 6480 12K Super 35 sensor and 14 stops of dynamic range, is being increasingly used for extracting 8K and 4K images from 12K, emulating the subtle skin tones and extraordinary detail of high end still cameras. However, as Hoffman points out:

“A true 12K pipeline is probably five years down the road. We’re not there yet.”

Over at the Sony booth, the company was showing (and now shipping) a smaller Venice camera, Venice 2, which features a new 8.6K full-frame CMOS image sensor, internal X-OCN and 4K Apple ProRes 4444 and 422 HQ recording. It has 16 stops of dynamic range, extreme low light capability, highlights that roll-off, and natural skin tones. 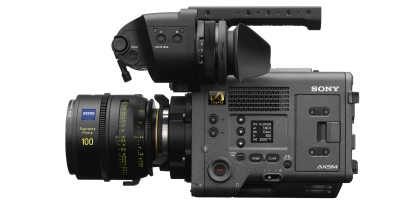 Sony’s new Venice 2 is smaller and easier to move around a set while boasting an impressive 16 stops of dynamic range.

Sony’s 8K solutions are being used for simultaneous creation of 8K, 4K and HD programs as well as super-zoom effects. On the cinema side, the new Venice 2 was one of the more popular products at the NAB Show.

“For 8K pre-production, we have utilized the Venice in 6K mode with anamorphic lenses to fill the raster for 8K UHD,” he said. “This was used extensively in Miami to capture the sights and sounds of football’s most important game. To capture pre-production elements with a tethered Studio camera would have been impossible in the South Beach environment.”

The Venice 2, he said, with a choice of 6 or 8K imagers provides more options when producing content for 8K UHD.

In addition the PWS-4500 server can record 8K images and has functionality to convert the 8K images to 4K and even HD for use in existing OB vans. The tandem of the UHC-8300 and PWS-4500 has been used on many major league and big game productions as a high end replay system. 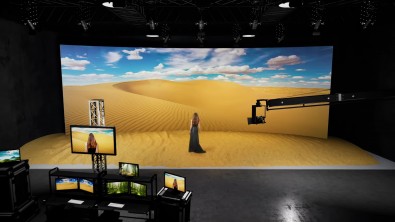 “In terms of 8K production for UHD, currently there are terrestrial services in Asia that are hungry for content and are producing special events live,” said Gaggioni. “As lensing options are relatively limited, it will be some time before there is a wide deployment of cameras to cover larger sporting events.”

There is increasing demand, he said, for replay applications in 8K for “superzoom” applications.

“Our PWS-4500 is capable of recording 4K at 120 fps, however, there is a desire for high frame rates for replay that will put enormous strain on the camera chain and storage for the data that is produced,” he said. “Like 4K now, many content creators are looking at upconverting 1080p60 to 4K for economy of storage and available camera with frame rates that viewers have come to expect.”

At the 2022 NAB Show it was clear that the industry is beginning to understand that the value of 8K video capture is about more than just pixels. Greater resolution means a better way of storytelling throughout the entire creative process. But has the industry arrived at a time when resolution does not matter, just the amount of data you can acquire and put to good use?

“We believe resolution is important but needs to be accompanied by a high quality image capture process in order to add high levels of latitude and tonality of the light captured,” said Gaggioni.