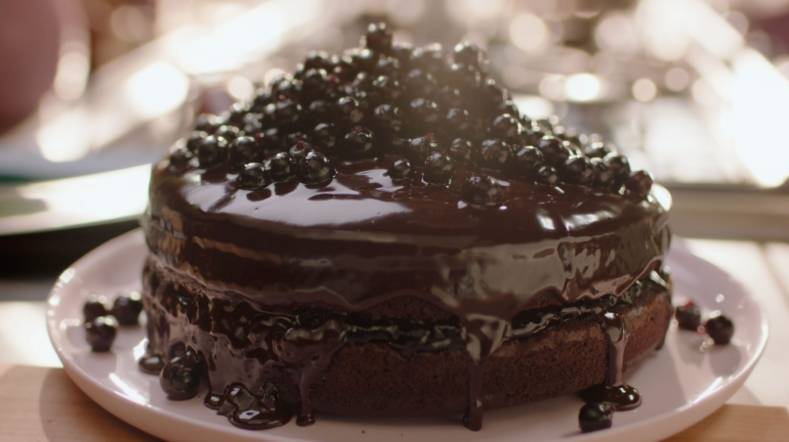 Cooking has long been a popular subject for television, partly because everyone has to eat, but also because it’s the sort of programming that can, in principle, be turned out of a studio in half-hour chunks, several times a day.

Anyone glancing at cinematographer Robin Fox's back catalogue of culinary camerawork, though, might be mistaken for misidentifying much of it as a glossy commercial.

Fox's work, particularly on Nigella Lawson's cooking programs (mostly recently Cook, Eat, Repeat for BBC Two) exists almost as an antidote to studio multicamera shows. A third-generation photographer, Fox follows in the footsteps of father Colin, and studied cinematography at the National Film and Television School. He credits cinematographer Neville Kidd and director Dominic Cyriax with establishing the approach which has become a Lawson trademark; Kidd, now an ASC member, would go on to direct photography on productions including Sherlock and Doctor Who.

"It's as much a lifestyle thing as a cooking show, so it has to look good," Fox begins. "Neville and Dominic established the style which is single camera, prime lenses, a very sort of drama-esque way of shooting. I've done three series, and I think Neville did one or two in the studio, and he did several series before that on location." The process, Fox notes, is necessarily "a lot slower, but it affords you the ability to get the best out of every shot, to make sure the food, and Nigella, and the environment look as good as they possibly can."

The approach represents something Fox thinks of as "a different goal to the cooking competition shows, where it's more about getting everything shot and done in a specific amount of time." With each of Lawson's series averaging about six episodes, Fox and Cyriax spend perhaps five days on each episode, whereas a studio multicamera production might manage several episodes per day.

The investment of time per-episode is offset, to some degree, because the single camera requires considerably fewer crew, which Fox considers "quite a small intimate team. I've got a focus puller, Ollie Lockett, who's done all the series, and a gaffer, Callum Collins on the last series, and that's it. Chris Syner is the sound recordist. He's worked with Nigella forever. It's all about keeping a small, tight, friendly team." Still, he continues, while "it's quite intense, it's a much more rewarding process from my point of view, and everyone's, I think, because Nigella appreciates we're there to make everything look good."

Given the need to maintain consistent lighting through a shooting day, the production uses a set at Dukes Island studios in Acton, in west London, although the layout is heavily based on Lawson's own home kitchen which was the location for early seasons. "I've shot commercials in Nigella's kitchen," Fox recalls, "and been absolutely astounded how close the set is to her actual kitchen. It's quite spooky. It's adjusted every series, tweaked. We changed the window and door positions between the first and second one I did, and the third one is tweaked again."

With the production's thoroughly cinematic ambitions in mind, Fox had long used the Arri Amira for its Super-35mm sensor and widely-adored colorimetry, though the demands of certain broadcasters have provoked change. "Since the last series, I've moved over to using a Canon C500 Mk. 2 as my main camera. The whole Netflix thing prompted my move, really – cameras they'll accept. C500 has large format which is very appealing. Amira is a brilliant camera, I can't fault it at all, and there are things about it I miss in the C500. The ergonomics, the viewfinder, the two hundred frames per second. It's not light, but by the time you've built up a C500 it's not far off the weight of an Amira."

Ancillary equipment, Fox goes on, has often been expanded to allow the production to evolve alongside the technology. "We used a probe lens on the last one to get interesting angles looking through objects toward food, and through the food itself. I use a skate plate as a sort of dolly slider. On the previous series, we attached that to a piece of scaffold which we then hang over the top of the hob and you can get some amazing macro stuff, flying over the top of the pans. That looks great, especially at high speed. We do a bit of high speed every now and again, just for that hero moment." 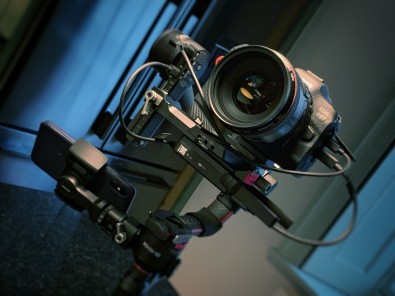 Lawson's most recent series also features a Canon EOS-R5 on a DJI Ronin RS2 Pro gimbal. Fox credits the camera as "a good match for the Amira. It was nice and easy to set up and move around with, and it partners very well with the C500." With full-frame sensors on both R5 and C500, thoughts turn to focus puller Lockett, especially given Fox's description of the shooting environment as "relatively dark. We try to keep the lighting as natural as possible. If you walk out into the garden area it feels like a bright summer's day, so we push as much light through the window as we can – but we don't fill the kitchen too much."

This, combined with the freeform nature of an unscripted production, means that "poor Ollie does sweat a bit when we're shooting in the studio with the shallow depth of field. It's all handheld, Nigella is moving around. It's not scripted so she doesn't tend to stay in one place too long. But coming in and out of focus is a style point. We don't chase her, if she walks back down the kitchen we let her go out of focus. We embrace it." The R5's saving grace, Fox continues, is it's superb autofocus: "Ollie's got the day off when we do that sort of stuff."

That requires Canon lenses, particularly including the EF 50mm f/1.2L USM. Much of the rest of the production is shot on Canon's own cine primes, on the R5, C500 and Amira. Fox describes the R5's autofocus feature as "extraordinary. It holds its focus absolutely no problem at all. The 50mm also has very good close focus – it's not quite macro, so I do use extender rings every now and again to bring the focus a bit closer."

On the most recent series, Fox and gaffer Collins adopted Arri's Stellar app for easy scene changes via wireless DMX, though much of the lighting package is non-Arri. Fox's go-to light key light has been Kino-Flo's LED Celeb range, a careful choice. "I did look at a number of LEDs and we did some tests. I went for the Celebs primarily because of the skintones, but also because the shapes and sizes they come in are very useful. We use the 200, the 400, the square 400Q and the rectangular 400. The 400Q is my favorite to reflect in food." 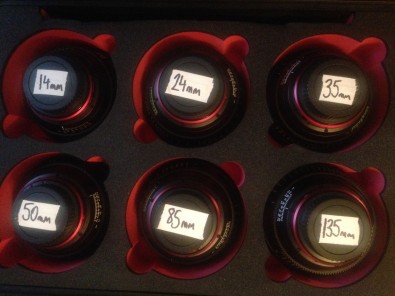 Fox's creative approach combines different qualities of light. "I think a lot of it is the balance of mixing hard light and soft. It's great to be able to use HMIs to create a nice hard backlight, but also to mix it in with a soft key or a soft toplight for the food to reflect in the surfaces. All the daytime stuff is shot daylight balanced, and we have HMIs coming through windows from the garden. I think 4Ks are our biggest – I have a couple of those coming through each of the windows, softened right down. We have a couple of 2.5Ks as harder edge lights."

The results, with their undeniable gloss, have generated a lot of calls from productions keen to achieve something similar. "I have been approached to shoot competition shows," he remembers, "and I've got a long way down the road before they realized that you can't necessarily make it look like a Nigella show and have the multicamera element. There's normally a compromise. On a lot of multicamera stuff you end up looking at the scene from multiple angles, which means the lighting is compromised all the time."

That's not a direction that Fox would wish to go on Lawson's long-established series. "I think the fear is that we might do something like that and it would dilute the look and feel. Once you've done that, it's an established thing, and that would be a sad thing if that were to happen." Avoiding that pressure, Fox reflects, is in large part creditable to director Dominic Cyriax. "He's perfected this method and he also schedules it to some degree, so he can take the pressure off – but it's not a technique that you can use on every show."

And it's not for want of trying. "I tried really hard on one – changing all the lenses they wanted to use, changing the way they lit previously, redesigning the set. We got a long way down the road with it before they decided they couldn't make the schedule work. There's a definite conflict between the look and the speed. I've yet to transfer the technique across to other shows."

One final advantage of a production that might spend a day documenting the making of a chocolate cake is that the results include several excellent chocolate cakes. "A spork," Fox finishes, "is standard issue."