On board NEP’s ND1 production truck, which will be used to bring Super Bowl LVI into millions of living rooms around the world.

With this year’s Super Bowl LVI telecast coming smack dab in the middle of the Winter Olympics, NBC Sports crews will have their hands full. Having to navigate both high profile events on the same day, NBC is calling it the “one of the greatest days in the history of television sports [production]” and a “Once In A Lifetime” event.

The Super Bowl will be produced with the help of NEP U.S. Broadcast Services, which will send 10 mobile production rigs (baseband and IP-centric) to cover every aspect of the game for both NBC Sports and a number of other broadcasters, including providing the world feed. The veteran production company will also handle signal distribution and a fiber backbone for NFL Films, while supplying several types of RF and specialty cameras. NEP produced last year's Super Bowl telecast, for CBS, as well.

The actual game will be televised live in NBC’s favored 1080i HD format, using a wide range of cameras from Sony (HDC2500 and HDC4300, with Canon lenses) and others. Among specialty cameras, a C360 camera attached to a SkyCam system will be used to present new overhead looks and replay angles, as well as offering focus on individual players.

The C360 camera (by C360 Technologies, Inc., in Wexford, Penn.) shoots in 8K and records in a 180-degree immersive field of view. This enables them to go back and reframe a play to provide a more definitive angle. It will fly attached to the bottom of SkyCam to provide up-close and intimate replays of the game. In addition, because the camera captures an immersive field of view, production can go back in time to reframe a play to better provide definitive views from C360. 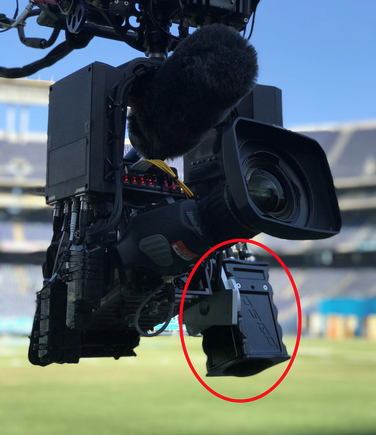 A C360 8K camera (circled) attached to a SkyCam system will be used to present new overhead looks and replay angles, as well as offering focus on individual players.

For example, if there’s a question about a receiver catching a pass on the sideline, the technology can freeze the entire image, zoom in and focus on the player’s hands to confirm possession, before panning down to the player’s feet and zooming in to confirm both touched the ground before going out of bounds.

Several handheld 4K and 8K cameras will also be located in the end zone to capture highlight and replay material.

The NBC Sports production team in charge of the Super Bowl is the same as those who help produce the network’s “Sunday Night Football” telecasts, which has been the top rated primetime show in America for more than a decade.

The main game truck—to be supervised by veteran director Drew Esocoff, and Executive Producer Fred Gaudelli, is called “ND1” and consists of four 53-foot double-expanding trailers with seating for more than 75 operating positions (although they won't all be used this year). This year’s Super Bowl game will be the seventh telecast they have jointly worked on.

When asked how many cameras would be used for the telecast, Gaudelli said, “I can’t even tell you the number of cameras. We feel like we do the Super Bowl every Sunday night, so the cameras we add for this game are really to capture specific game situations, like more goal line cameras, more sideline cameras, cameras shooting down the end line (for replays). We want to make sure we have everything covered.”

Previous Super Bowl telecasts have used more than 100 cameras and this year looks to be no different. 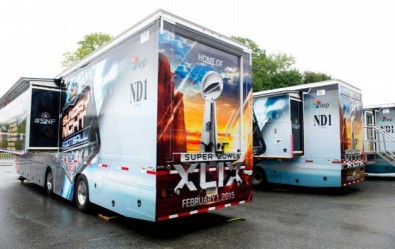 There will be some remote positions (graphics operators at their home) included into the workflow, but most will be on site for the Super Bowl.

In total, NEP will send about 70 technical and support staff to Los Angeles, where they will oversee the day’s operations within the truck compound.

“Working with our clients year after year to produce an event of this magnitude is always exhilarating,” said Glen Levine, President, NEP U.S. Broadcast Services. “Collaboration in all aspects of production, the hard work of individuals, and our continued drive to achieve the best possible outcome, will all be on display at Super Bowl LVI.”

By now familiar safety protocols that have been developed over the past 18 months will be in place during the game, with social distancing, daily testing, masks, air filtration systems and periodic sanitizing wipe downs of the equipment on board the trucks all a part of the safety protocols established by the CDC and the NFL. Due to social distancing rules, the truck compound has grown larger to space out its staff.

NBC Sports will debut a new graphics package (generated by two Chyron Mosaic XL systems) that for the first time with use a Steadicam rig to create AR graphics on the field, according to NBC Sports’ Gaudelli. The network will also use the large Infinity Screen video scoreboard at SoFi stadium as a graphic display tool for some of the virtual graphics. 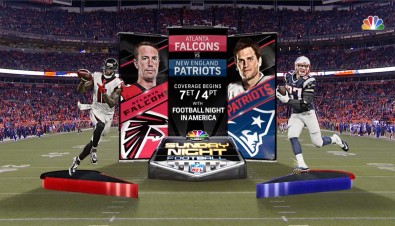 NBC Sports has implemented AR graphics in the past but continues to refine its processes to bring viewers captivating imagery electronically inserted into the live broadcast.

“There will be a Los Angeles flavor that will be reflected in our graphics look as well as throughout the broadcast of the game,” said Gaudelli.

Gaudelli said they are planning a 6:00pm film-style show open to lead into the game that merges the essence of Hollywood and the history of the Super Bowl. It will include Halle Berry to host the open and is filled with movie clips of famous football movies, as well as footage from past Super Bowls, some cameos from Hollywood actors and images of the SoFi Stadium.

“The Super Bowl has gotten bigger in every way,” said Gaudelli. “We’ll have a nice bag of toys [technology] to play with, but it all comes down to how you cover the critical moments of the game.”