Today there seems no need to say that audio is digital. It has become the norm and whatever the application, about the only place audio signals are found in the traditional analog form is right next to a transducer, such as a microphone, a loudspeaker or a guitar pickup.

A small number of enthusiasts continue to work with legacy analog equipment, citing vague sound quality factors and advantages that simply cannot be substantiated by any known test or measurement. I suspect that their definition of what sounds correct or natural includes the deficiencies inherent in analog recording and when digital recording removed those deficiencies it was deemed to be wrong.

There are certain parallels with the restoration of old cars, railroad locomotives or airplanes. We can justify these actions in a number of ways. It is true that preservation or conservation of such things helps people see where today's society came from, but it is also true in today's IT-saturated society that a lot of people miss the days when life was simpler.

Progressing Accuracy
Digital audio was traditionally restricted by the availability of the necessary technology. The original bright idea was that digital audio would be far more accurate than what went before and offer a quality advantage. It's no good having a bright idea if the parts needed either do not exist or are prohibitively expensive. At one time audio and computers were two completely different fields and audio had to solve its own data storage issues because computer equipment lacked the necessary performance. The Compact Disc and the DAT format both left the storage technology of the computers of the time in the dust.

Then the explosion took place. The revolution caused by the invention of printing reached a pinnacle when it evolved to print electronic circuits. The more components that could be printed on a given piece of silicon, the cheaper the parts became. The cheaper they became, the bigger the market that could afford them. This was positive feedback in action and the cost of digital circuitry fell like a stone.

The increased demand led to tremendous effort being put in to all of the enabling technologies associated with computing. These included coding and error correction that would be needed by high performance digital storage media and communications links alike. At some point what was previously known as computing came to be called information technology.

Flexibility and Random Access
Digital audio both benefited and suffered from these developments, because digital audio is a form of data. Any device that could store or deliver data could also work with audio. This meant that audio could be sent from any place to any other place without restriction, allowing a huge range of services that were simply impossible with analog technology. Although digital audio can deliver the highest sound quality known, in the end that wasn't the key factor. It was the flexibility, the random access and the ubiquity that appealed most.

When there was no longer a cost penalty, the traditional dedicated audio product simply disappeared. A good example is the radio station, in which all kinds of different audio media was replaced by an IT-based file server.

Whereas a traditional radio station had a transmitter that radiated RF power in all directions, that is no longer necessary. The audio is instead delivered by a digital network and instead of tuning in, one logs in.

At the same time audio almost disappeared as an independent discipline. Audio from then on would be for something or with something. The technology and the economics were such that practically any electronic device could easily have audio functionality added.

Beyond Hi-Fi
The effect of digital audio on hi-fi was interesting. The arrival of the Compact Disc meant that anyone with a player now had a signal source that was higher in quality than any legacy hi-fi component. Worse than that, the price of the players kept falling so that form of exclusivity was also eroded. The business model of hi-fi had been for a long time to gull the punter into parting with money for something that was highly over-specified and made little or no contribution to sound quality.

That business model simply embraced digital audio and sought to treat it in the same way. I think my favorite absurd hi-fi accessory of all time was the special ink that enthusiasts could apply to their CDs to "soak up the stray light from the laser" and thus enhance the sound quality. I did, however, identify that there was a plausible mechanism by which the enthusiast would perceive improved quality and that was due to solvent inhalation from the ink.

Any endeavor regularly operating at that level of nonsense cannot make any technical progress and as a result today's hi-fi systems sound no closer to the original sound than they did 20 or 30 years ago. Imagine where aviation would be if the marketing department could influence the design more than the wind tunnel.

Digital technology made possible processes that were simply impractical in the analog domain. One of these was the development of techniques and algorithms that could be used to restore historic recordings in which a breathtaking musical performance was marred by the limitations of the recording technology of the day, combined with degradation due to the age of the medium. The results obtained in modern restoration projects are nothing short of astonishing.

This was bad for the musicians, the music and the consumer and we can thank IT for ending it. The falling cost of audio equipment meant that anybody who wanted one could afford a modest recording studio consisting of a small mixer with a USB connection plugged into a laptop. The rapid spread of the Internet meant that it was no longer necessary to purchase a pre-recorded medium any more. The data could be downloaded.

Ironically, the digital revolution also led to the demise of the traditional newspaper. The first impact was that digital technology allowed the page make-up process of a newspaper to be performed more easily, quicker and cheaper than the traditional mechanical process. This allowed the same newspaper to be printed more efficiently, but it missed the point that a newspaper is another pre-recorded medium. As with audio, the data could be downloaded instead of sending the dog to the newsagent. The canine community never recovered.

All technologies follow the same pattern. At first they grow and life is full of excitement as new challenges are met and new inventions come along. They typically replace an earlier technology and become mainstream. Then they mature. The inventors get older and retire, or get bored and do other stuff and the rate of innovation falls off. In many cases the technology enters a phase of decline as a new one emerges.

Audio Is Everywhere
In the case of digital audio, there is no doubt that we have seen the growth phase and the inventions that had the most impact. There is no doubt that it has entered the mainstream. Audio is everywhere, from the greetings card that plays a tune to the reversing truck issuing spoken warnings. Audio can't go any further because it's already there, which tells us that it's a mature technology and any changes are likely to be highly incremental.

Happily, there isn't a lot wrong with digital audio, so there is no compulsion to improve it. Most of the time it does what is required. The only areas in which any improvement would be welcome is in reducing network latency, which the growth of optical fibers is already fixing, and in security; a problem that affects the whole of IT and one day will have to be dealt with.

Whilst it is always possible for a new technology to come along, it could be argued that it is unlikely because most of the tricks allowed by the laws of physics have been tried by now, and we have already chosen the best ones. Even if a new way of recording or transmitting audio came along, it would have to accept the fact that it could not out-perform today's digital audio because the sampling and error correction systems we use are as efficient as information theory allows.

This means that no new system that cannot presently be imagined, however clever, could out-perform what we currently have. It would therefore have no commercial or technical edge and would be pointless. The chances are that the present mature state of audio technology is going to be with us for some time. 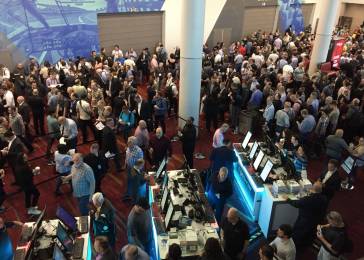