Previously a basic record/play system using a hard drive was considered. This relied on a table linking time codes in the recording with physical addresses so that the drive would access audio data blocks in the right sequence slightly ahead of when they were needed. In that way a time base corrector could present the samples in an unbroken sequence at the correct sampling rate to a DAC. The mechanical timescale of a legacy medium such as tape or film has been replaced by a logical timescale.

As the fundamental replay mechanism depends on time code, essentially every hard disk based audio recorder contains a synchronizer. If the time code is fed in from an external source instead of internally generated, any audio files that correspond to those times can be replayed. Such disk-based recorders work well with automated play out systems and rapidly replaced the traditional cartridge machine for broadcast of jingles and commercials.

As the typical disk drive has a high data transfer rate and fast access, it is perfectly possible to reproduce a multi-track recording where the disk drive recovers data blocks corresponding to several audio channels, delivering the data for each channel in turn to the appropriate time base correction process. As the channels are all locked to the same time code they will automatically be synchronized.

This ability to reproduce multiple channels also allows a disk-based recorder to act as an editor. Moving between edit points or searching within or between clips is much quicker on a hard drive because the drive doesn't find it any harder to access a block from the end of a file than it does from the beginning. This contrasted strongly with the need to wind a legacy reel of tape or film to get from the beginning to the end.

As editing systems became more sophisticated it became possible to locate edit points not just by time, but also, for example, by searching for the dialogue that was spoken in the wanted clip.

As traditional analog media were all linear in the time domain, the marketing machine decided that disk-based editing would have to be described as non-linear, so that the time-honored and questionable practice of describing something by what it isn't was continued. Broadcasting may even have begun the process by calling a radio receiver a wireless set. Put a rechargeable battery in it and it became cordless as well as wireless.

Fig.1 shows a disk containing two audio clips that are to be edited together. Treating the clips individually, the out point of the first recording is found, followed by the in-point of the second recording. The edit points can be located using the scrub-wheel controlled system described previously.

Once the in and the out points of the edit are established, it is a simple matter to make them coincide in time so that the edit can be previewed. Playing each clip requires a suitable time code sequence to be generated. Essentially a double time code generator is created, running from a common master clock that produces the sampling rate and the frame rate. Each time code sequence controls a disk access process that obtains data for its own clip. The random access ability and the speed of the hard drive permit the interleaving of data access for two processes using two different areas of memory for time base correction.

The secret is in the initial setting of the two time code generators. The first one is set to the beginning of the first clip, but the second one is set to a value that takes into account the difference between the in point and the out point codes.

What that means is that when the two replay processes are started, they will play with a time relationship that causes the second clip to reach the in point just as the first clip reaches the out point. As the two clips need not fully overlap, it is possible that at the beginning the second process finds no data. Subsequently the area of overlap will be reached and from then on the editor has simultaneous access to the sample streams of both clips and any appropriate transition from a hard cut to a slow crossfade can be made between the two clips at the edit point as Fig.1 shows.

Here the tremendous advantage of disk-based editing becomes apparent. Because the edit has been previewed, the operator knows what it will sound like, yet the original audio clips remain unchanged on the disk. This contrasts with the irrevocable nature of editing by cutting tape.

In a disk based editor, the preview is not in the least irrevocable because it was no more than the selective processing of two data files that were themselves unaltered. Instead a new data file, known as an edit decision list (EDL) came into being. The EDL is somewhat like a program, in that it contains a sequence of instructions to be carried out, but unlike a conventional program where the instructions are executed as quickly as possible, the EDL contains a time line that specifies when each instruction will be executed.

The edit decision list for the audio may form a subset of a more complex EDL system that includes video or film material. Where the audio is associated with film or video material, the EDL that was created during video editing can be imported into the audio editing process and used as a rough audio EDL that only needs to be adjusted or optimized rather than created from scratch. This saves time. 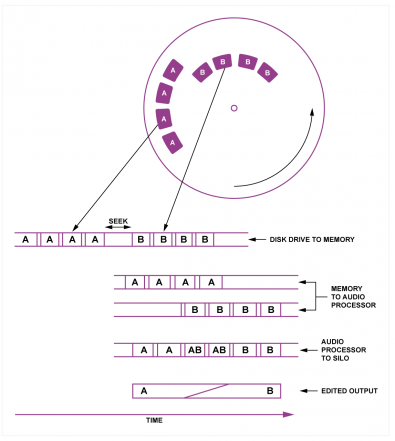 Fig.1. Two audio clips on a disk can be played independently to locate the in and out points for an edit. The edit is previewed by arranging for both clips to be recovered from the disk at the same time. By changing an offset added to one of the time code processes, one of the clips can be moved in time with respect to the other. At the edit point data from both clips are available and a cross-fade is performed.

In the event the preview is unsatisfactory, it can be repeated with different parameters. The in and out points can be trimmed, the relative levels before and after the edit can be changed and the length of the crossfade can be altered. The EDL is changed but the original audio files remain unchanged.

The rapidity of non-linear editing, the flexibility and the option of going back to the original material meant that once disk-based systems were reasonably economic the traditional methods of editing audio in it's own right or in connection with film or video were doomed and became obsolete almost overnight. Now in its turn the falling cost of memory technology such as flash means that audio editing can be performed without disks.

Whilst IT-based editing is faster than legacy editing and comparison is possible, there are some aspects of electronic editing that were essentially denied to legacy editing methods and these include the use of networks and communications so that the editing decisions can be made at remote locations. Instead of bringing the editor to the material, the material is brought to the editor. The difficulties involved in implementing remote editing are not great and the biggest concern is maintaining adequate security so that there is no unauthorized access to the material.

Whereas a tape cut edit gave the operator one chance, the IT-based editor goes to the other extreme and allows the operator to spend an inordinate amount of time optimizing a single edit thereby making the perfect the enemy of the good.

Once the EDL is complete and all of the edits have been previewed satisfactorily, the edit process can be carried out one last time and the results can be stored as a new file. At this point an important decision has to be made. If there is no possibility that a different edition will ever be needed the new file can be kept and the original audio files may be discarded.

For example a typical movie soundtrack may contain a combination of dialog, music, effects and ambience. If it is decided to release a version of the movie in a different language, the final audio mix is no good as a starting point.