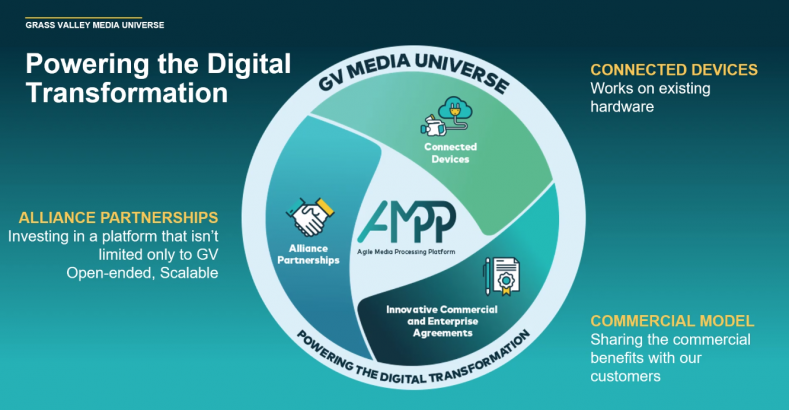 Back in the fall of 2020, several months after private equity firm Black Dragon Capital completed its acquisition of Grass Valley, it became apparent to the company’s management team that it had an unpolished jewel in the GV portfolio that needed attention. Given the virtualization changes, cost cutting and high demand for new content occurring within the industry, customers who served as beta testers told them, “this AMPP thing is going to change the industry.”

The Agile Media Processing Platform (AMPP) they were referring to is a software-based production environment that runs in any data center or cloud environment and is now at the center of Grass Valley’s live production offering strategy. Most of the company’s existing hardware and software tools have been or will soon be implemented into AMPP.

This major company shift was also supported by an overall rebranding and retooling of the company. The rebrand was announced in October and within weeks several long-time management staff were let go and new people experienced with cloud native environments were brought in. More IT-industry media professionals are set to join in the coming months.

During a recent online meeting with the media, Louis Hernandez, founder, Managing Director and CEO of Black Dragon Capital and Executive Chairman of Grass Valley, said the reason for the reorganization was to “simplify, streamline and have a more focused organization.”  Taking a cue from Microsoft and its successful refocus of its Azure cloud platform to the center of myriad of services, Hernandez said it makes sense to have everyone working with the same software core. AMPP is four years in the making, costs $100 million to develop and features 17 unique patents underlying the platform.

The Media Universe is poised to stimulate growth at Grass Valley.

He also said that after reviewing GV’s portfolio personally, AMPP jumped out as the most valuable to those producing live sports and entertainment events.

“We want to move Grass Valley Media universe [with AMPP as the core] to the center of everything we do,” he said. “To have a more connected digital platform that lowers the cost for everybody that joins the platform. That’s really the shift. We believe AMPP is the connective tissue to the future of the industry.”

Also, customers can buy task-specific services through the GV Media Universe, including both SaaS applications as well as support for Grass Valley’s entire portfolio—from cameras and switchers to IP infrastructure and software level orchestration and device control.

AMPP is a microservices-based platform that uses a series of cloud-based modules and new software technology to efficiently manage production, bandwidth and cost. Built specifically for the rigors of IP-connected workflows, the new signal processing technology supports Remote/At-Home Productions of all sizes and complexities. The concept behind AMPP is an integrated software environment designed around an ecosystem of cloud-based tools and services interconnected with existing Grass Valley solutions, third-party offerings and a community of online marketplaces. 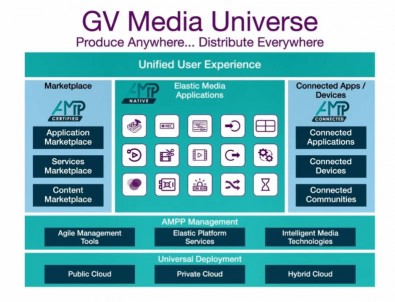 Offering a unified user experience will help productions save on cost and resources.

Using open APIs to support integration of third-party technology, AMPP can run in a public or private cloud as well as in on-premise environments.

“We’ve spent a lot of time and effort trying to build out intelligent media technologies to solve that problem for customers,” he said. “For example, we’re able to contribute very low bit rate streams to our cloud platform, but also do that with low latency. Customers can now get good results with just 5 MBps connections using our platform.”

Another example is new technology that allows users to tag and track metadata within their assets in the cloud. So, if someone is editing offline with a nonlinear edit system, they can plug into our cloud platform, using our Delta technology and pull out only the pieces they need, as opposed to having to download an entire video file. This saves time and money.

Helping its live production customers make the distributed digital infrastructures that support remote workflows, flexible scheduling and a reduction in equipment costs is key to Grass Valley’s future, according to Hernandez, who called this an “exciting time at Grass Valley.” Black Dragon Capital is committed to a 10-15 year investment plan for Grass Valley.

“Clients want integrated solutions at a lower cost,” he said. “We have a shot at helping people navigate this transition. AMPP is the platform to do it right: it will help customers be more efficient and will help us bring products to market faster and with better customer support. We live in a very fast-changing world. What was a product yesterday will be a feature of AMPP tomorrow.”