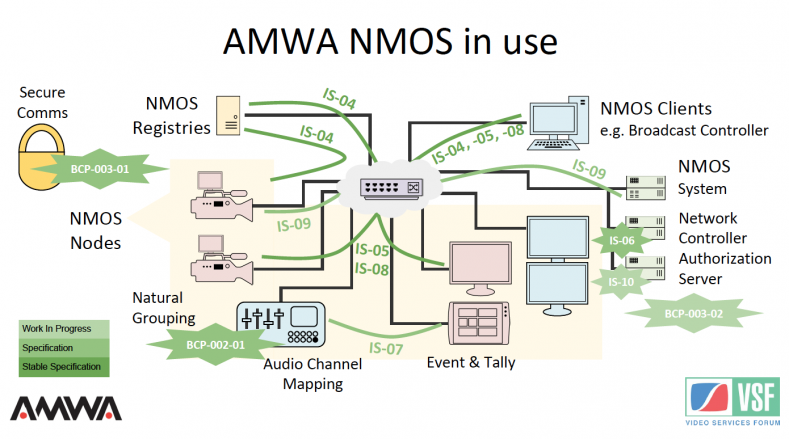 To date, the NMOS specifications have been very successfully deployed worldwide for the management of connections between equipment – typically in the SMPTE ST-2110 protocol. In this new work, the goal is to come up with a universal control protocol—or “device model”—that provides a structured view of and easy access to the controls and statuses of the things inside common production devices like an audio mixer or video frame synchronizer.

Citing ongoing work in the AMWA’s NMOS Steering Committee, which has met online for the past 18 months, John Mailhot, a participant on the committee and CTO and Director of Product Management for the Networking & Infrastructure division at Imagine Communications, gave a presentation during the IP Oktoberfest 2021 virtual event Sept. 28-30 that highlighted the group’s work entitled: “The NMOS Device Modeling Project – Overview and Progress.”

“There is some history to people trying and failing to do this sort of thing, but I really believe we’re at a point in the industry where it is finally possible for us to do some common work on device control,” said Mailhot. “We’re working on a way to model any device from a control perspective. By control, we mean status, setting values, and getting notifications of current events.”

“With these new specs, architecture designers can commission a system faster, and manage change in a system faster,” he said. “In the old days we thought of commissioning as a one-time event and was viable for about ten years. That’s not the case anymore. Now it’s more like I get it working for the show I built it for today and then I am going to reconfigure the system for three other shows I have to do next week. It’s a constant managing of resources on the network.” 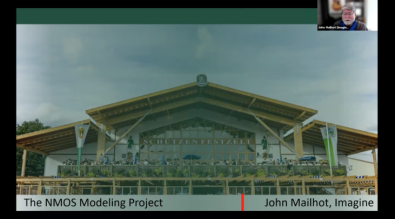 Leveraging AMWA’s IS-04 (“Discovery and Registration”) and IS-05 (Connection Management of Media Nodes) specifications already developed, a device locates the IS-04 registry. The device then registers itself and then, as a system engineer, you tell the broadcast control layer, “hey tell me what’s new. Oh, look there’s a new device, let’s give it a new name and pull it into the Routing system” making it available for individual productions. This gives the system the IP-inherent flexibility to repurpose production resources across a media company’s assets, no matter where they are located. This all works today with NMOS.

Support for AMWA NMOS IS-04 and IS-05 across a wide variety of products is now becoming widely available and is used in systems worldwide.

The new work – this NMOS Modeling Project – builds on this successful foundation, tackling the more general problem of control and status and notifications. The modeling project work is protocol-independent, but for first implementations will leverage JSON-RPC over websocket connections. Devices are modeled in a hierarchy of blocks, and some of the first Blocks/schemas will focus on NMOS receivers and senders—common items that tie to the existing NMOS specs—that will also help define a few basic schemas to test devices. By combining public/standard schemas and proprietary extensions, common parts of devices can be represented in a common way and controlled by common code.

“We started with the notion of saying, ‘could we take some of the good things we have already done with respect to setting up connections between senders and receivers and expand it to be more generally about how to set other controls on devices or how to get statuses from devices?’ At least for things that are common.”

Like every audio panel has a Gain knob. There’s no common way to access or change the Gain level on that specific mixer across the network so when control systems go to write drivers, integrators have to (pay to) write a whole driver for every device in the project simply to adjust the gain on an audio panel. 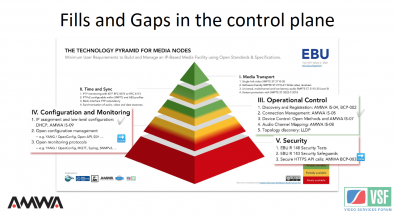 The NMOS modeling project work is protocol-independent, but will initially leverage JSON-RPC over websocket connections.

“We did a study phase, looking at some existing protocols, figured out what was good and bad about them,” he said. “We looked at work that was done in adjacent industries. The switch industry has a thing called Open Config that they use for a similar type of control functionality, and it has a similar model of public/private interplay to what we’re looking for. We’re working through the process of documenting our approach to having an extensible standard and methodology for controls and statuses for devices.”

Due to this emphasis on virtually controlling products and systems, Mailhot said internally they are calling the project “the NMOS Control Architecture.”

“What we are doing is creating a control architecture so that the broadcast controller knows about a device,” he said, “whereby, it can quickly determine, ‘does this expose the NMOS control architecture?’ If it does, then it can query what are the controllable things in there; ‘how are they organized?, and, ‘can I find any parts of it that I can control?’”

Thus the NMOS Modeling Project is seeking to provide a way to model a device from a control perspective, so that common sub-structures that do common things can expose a common API. Those APIs can be extended with the manufacturer-specific information and controllers can attach and use the common data in a universal way.

For the end user, Mailhot predicted that these kinds of modeling and control projects help the workflow system make configuration changes both to the equipment itself as well as the way that the operations staff interacts with it, and to do that with less customization and fewer custom drivers. It’s all about reducing the friction or effort involved with managing change in a facility.

“This spec really simplifies what people do today in a very labor-intensive way,” said Mailhot. “The trend in TV facilities is to be used in a very flexible manner. That means there needs to be workflow systems that facilitate integration of new devices on the network and organizing changes to system configurations in a programmatic way that are now commonly performed manually.”

The NMOS Device Modeling Group plans to hold its first “workshop” (likely virtual) testing early versions of the work by the end of the year.