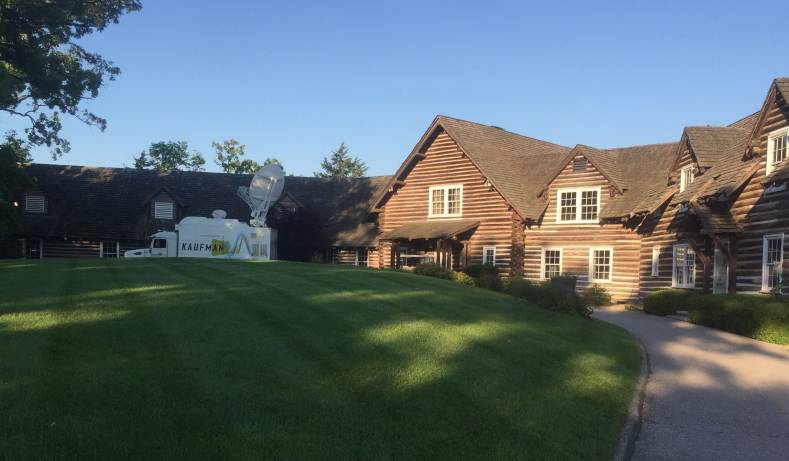 There is not a more simple or convenient way to transport live broadcast program content to multiple TV stations than by satellite.

When it’s time to go live to air, ready or not, the talent, crew and gear will be tested as the live audience watches. Stacking the deck means being prepared with solutions or alternatives to all conceivable adverse issues. In live TV field production nearly anything can happen. Sometimes the smallest and most simple of showstoppers can, like dead AA wireless mic batteries, instantly become a major technical embarrassment when a hot mic dies live on the air. Who won’t notice?

The good news about AA batteries is that they are commonly available at convenience stores everywhere, and no OB engineer should not have more than a few handy.  There is no valid excuse for an AA battery to die in the air without a backup. On the other hand, nearly all other TV production gear demands special power supplies, batteries and connectors that are rare outside of TV studios and OB trucks. That can be an inconvenient truth for those in live TV field production when crews are not fully prepared. Standardized power over IP or USB isn't a standard yet. Field shooters and techs need a plan to overcome this and about every other surprise technical scenario they can imagine.

Many experienced live remote production technicians pack a private collection of problem-solving adaptors, such as 2.5mm Mini audio to ¼”, ¼” to RCA, and ¼” to XLR adaptors to about anything for example. I also carry a virtually anything in-to anything out video adaptor solution. You never know when someone will show up with a VGA signal for a 1080P production.

Similarly but at a whole different level, construction-size rash bags provide inexpensive effective weather protection that requires little storage space. Trash bags and duct tape can protect cameras and exposed electronics during a downpour and can make a useful emergency raincoat. Live remote TV production is about succeeding on the air while fighting to protect your gear when you don’t have enough hands to run the camera and hold an umbrella.

The more TV production crews work in the field, the more they learn what small items they can bring along that can most easily resolve common remote production challenges. Any live TV field production without contingency plans ready to overcome virtually every predictable emergency is asking for trouble. Gremlins lurk at all live TV events.

Designed For Convenience
KISS is an acronym for Keep It Simple that is a design principle stating that complex systems should be avoided to simplify user acceptance and interaction. The KISS principle was recognized by the U.S. Navy in 1960 and became popular in the 1970s. In 2021, it continues to be used and few complicated systems benefit more from KISS design principles than smartphones, sophisticated military technology, and live TV production. In terms of broadcast system design, KISS also refers to the number of potential points of failure between the source and destination and contingency plans if something in the content-flow chain fails.

In the days before bonded cellular systems, old-school field-to-studio BAS microwave connections from ENG vans were simple: Video and audio plugged into a transmitter with a movable antenna in the van and stable video and audio came out of a receiver at the station studio once the antennas were aligned. Today, most news live shots and many remote productions are conveniently backhauled to the studio via bonded cellular systems or ISP data systems that rely on third-party support to function properly.

KISS design principles also lead broadcast system designers to use the N+1 rule to determine how many devices will be necessary for successful live production. N+1 says the system will need the number of devices such as cameras, mics, inputs and monitors you think you need plus one more. N+1 also says that when you realize that need, it will most likely occur at the worst possible time. A hot spare ready to substitute for a failed device has saved many live productions without anyone in the audience noticing.

Seceding Control
Convenience is King, but technology sometimes appears headed another direction. What could be simpler than an ENG truck with a private microwave back to the station? Sure, the ENG operator had to hit a line-of-sight BAS receiving antenna on the station tower, but it was a one-hop, two-operator system, like a satellite truck. One field transmitter, one studio receiver and two operators seems simple and follows the KISS principle, right? Fast forward to 2021.

“The cloud” is worthy of nearly all the accolades it receives, but it is also broadcasting’s Achille’s heel. How many stations control their daily content over the internet from a remote master control room? Excuse me, but my old analog self still believes the shortest and most simple distance between two points is a straight line. The cloud is not a straight line. It works, but the cloud has myriad points of failure beyond any TV engineer’s control that can be as simple as a dirty RJ45 connector in Timbuktu, or something infinitely more complicated. Things happen and TV gear always acts up at worst possible times.

Most broadcast engineers like to be in control, and seceding control isn’t comfortable or easy. AI, ML and dedicated people monitoring more points of failure in the cloud does not make up for the higher risk or cost of additional potential points of failure.

For example, I recently engineered an offshore power boat race event that was on the air for 5½ hours, carried on about one hundred broadcast TV stations and cable channels. We researched two methods to distribute the feed from our studios to everyone who wanted to broadcast our temporary boat-racing TV network - satellite and the internet. We nearly always use a satellite, but it seemed like 2021 was the time to seriously investigate using the internet for live, one-to-many distribution of our content to TV stations. We’ve been streaming to viewers on social media for many years, but the quality isn’t reliable or good enough for TV broadcast.

It turned out that the cost of hiring a satellite truck continues to be significantly lower than using an internet streaming service to distribute our live content to multiple locations. I suspect much of the extra cost of professional internet streaming was the number of people involved in routing and monitoring the content. Satellite backhaul follows KISS principles. A satellite was the shortest distance between our temporary broadcast studio and our affiliates, and the satellite truck engineer monitored the delivered satellite signal quality throughout the feed. It was the simplest of all backhaul options, using the easiest distribution method for our broadcast affiliates to deal with, and was the least expensive. The KISS principle is old, but it’s as relevant as ever in 2021.