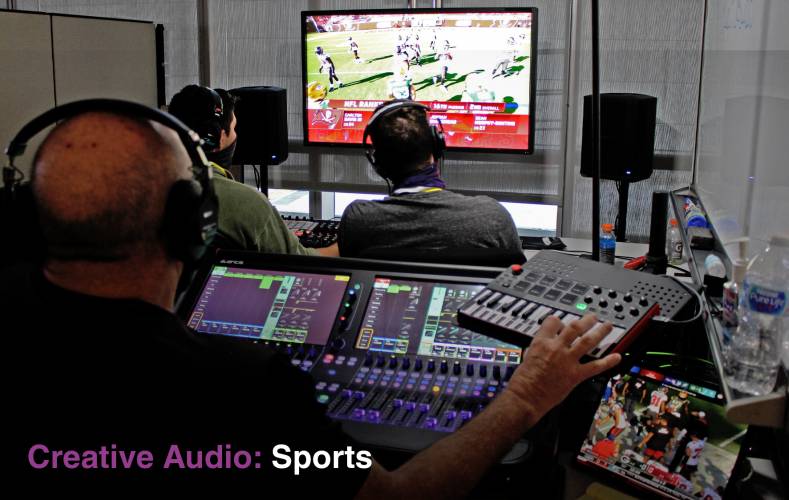 When televised sports events began to return after the initial coronavirus lockdown in 2020, U.S. broadcasters faced a dilemma. With no spectators in attendance, what do you do about the lack of crowd noise? This is the fascinating story of how a team of award-winning creative audio engineers set about manually re-creating the right atmosphere.

Back in 2006, multi-Grammy Award-winning engineer Fred Vogler, an alumnus of the University of Southern California, had a eureka moment while attending a football game between his alma mater and Notre Dame. After hearing the rival team’s fans, he arranged an audience with legendary USC football coach Pete Carroll and pitched him the idea of helping condition the team by playing back hostile crowd sounds during training and practice sessions.

Vogler spent the rest of the season travelling to USC’s away games, recording hours of crowd noise in quad. Ultimately the project came to naught and he put the recordings on the shelf, returning to his regular gig as the LA Phil’s principal sound designer and front-of-house mixer at the Walt Disney Concert Hall and the Hollywood Bowl.

When Covid-19 hit, Vogler thought back to those recordings and approached a number of pro sports teams with the idea of his company, Sonofans, filling their empty stadiums with genuine crowd sounds played back through an immersive PA system. His demonstrations were well received, but the teams pleaded poverty due to the lack of ticket revenue.

Vogler’s colleague, Jeff Wallace, the Hollywood Bowl’s associate production director, indefinitely furloughed due to Covid, signed on to coordinate the Sonofans teams and maintain the calendar. “He was invaluable for spirit and inspiration,” Vogler says.

“What I told FOX and everybody in the beginning is that we are performance-based,” Vogler says. “We come from the performing arts. We think about it in terms of how to recreate an atmosphere at an event. We want to create this amazing, realistic environment that gives everyone that adrenaline, the desire to pump their fist or make a little extra effort, because of the crowd sound.”

When baseball returned, Vogler says, FOX had Sonofans work on those games, too, later adding football, basketball and boxing to their roster. He and his team spent a lot of time listening to different sports, learning the nuances of each. “If you critically listen to sports you find that there’s a really different sound for each one, even between college football and pro football.” For example, Vogler says, college football fans are more boisterous and vocal, plus there is the constant battle between the home and visiting teams’ bands.

Archive Mining
Adding to his own field recordings, Vogler mined a variety of other sources, including FOX’s archives, for crowd sounds appropriate to each sport. “You want pure crowd,” he says, also noting that he was able to extract the typical drums and chants of an American soccer game. “One of the hardest games to mine is basketball. There’s so much sneaker and ball squeak,” he says, as well as music and announcers blaring through the PA.

Vogler recruited several young sports fans, friends of friends, to act as reaction operators and trigger the appropriate crowd sounds, each paired with one of the mixers. “You have to have people involved that really love sport,” Vogler says. “They are definitely the type that can watch 10 hours of sports a day on the weekend.”

Crowd sounds specific to each sport were loaded into Ableton Live before the game and triggered from three devices in each system. The mixer used one or two trigger devices to create a sound bed to which the reaction operator added other crowd elements. The reaction operators also had footpedals that cycled through a predetermined set of sounds that they could trigger.

The broadcaster fed picture to the Sonofans teams, who were set up in a space in the FOX Sports facility in Culver City, California. “We would add the reaction and send it back, four channels, to whatever city the game was in, where the A1 would add the field mics, referees, commentators and announcers that go to broadcast in 5.1. If it was a local game, it went upstairs,” he says.

Establishing the Right Walla
“It’s really important that you have a wide range of sounds and varying intensities for each of the sounds,” Vogler says. For example, the background bed, known as walla in the film world, needed to range from soft to loud. “Sometimes in a game you need a lot of walla and sometimes it’s pretty quiet.”

That walla is specific to each sport, he says. “It’s not just the numbers of people but the behavior of the crowds. Football, that’s a group of people that’s really animated. Boxing, they have a more staccato vibe; you can hear the intensity. Soccer is in a groove, because the game is continuous, a pulse. Baseball is up and down; there are innings with almost nothing, then innings where the fans are on their feet screaming.”

After years touring massive venues, the mixers know what a large crowd should sound like. “I would rely on Jim, Kevin and Antony to provide a bed of sound. We would also give the mixers some of the chants and drum patterns, so they could trigger those with the walla. The reaction person would take the position of the home team; they would give a little extra negative reaction to anything that went against the home team.”

Early on, there was some minor controversy regarding the home team and negative reactions, Vogler reports. “We did an NFL game, a home game for the Philadelphia Eagles. I didn’t know this, but the Eagles’ home team fans boo their team if they don’t do well. The reaction operator, a big sports fan, booed the quarterback and it made it into the news,” he laughs, with one publication reporting that the quarterback was so bad that even the artificial crowd booed him.

Understanding the Fans
“We got accolades,” he stresses. “On social media, fans were saying that whoever was doing the crowd noise understands Philly fans; they were very complimentary. But some of the other teams were concerned, so we were told to be careful,” he says.

“I feel like we were very creative in trying to reproduce sounds that were specific to those sports and teams. We were trying to make it so that if you were a fan of those teams you would feel well represented.”

Once sports teams generally returned to some sort of normal as pandemic protocols were implemented, Sonofans often found themselves with a busy schedule. “Sometimes each of our mixer and operator teams would do two or three games, or sometimes just one. Kevin did a lot of boxing for FOX, sometimes five different bouts. You never knew if they were going to be one or two rounds or go the distance, so sometimes they would be long nights.”

Some days, Vogler says, Sonofans worked as many as nine college football games, arriving at the broadcast studios at 7 a.m. for a noon kickoff on the east coast. “There could be an 8 p.m. west coast game that went until 10:30 p.m., so we had days when we were there for 15 hours.

Keeping the Pace
“But college football was some of the most fun. We injected a lot of band. The pace of those teams can be unbelievable, so I would rotate our teams. We had five systems and would choreograph who did which game and at what time.”

Vogler assembled and configured the equipment, with assistance from an Ableton expert, and mined the sounds, but didn’t mix, instead overseeing operations and providing quality control. “I would listen to the broadcast on TV upstairs to see how it was translating. I would text the mixer and say, ‘You could push this more, it’s not quite making it to broadcast.’”

Sometimes, he says, watching a game, he would turn his head in anticipation when he heard the crowd noise building up. “I’d forget — that’s our guys, not 20,000 people. That happened more than once.”

Now, as crowds return to sports events, Vogler can look back at the past year with some perspective. “It was fun because it was new territory. FOX told us that we exceeded their expectations right out of the gate. They liked what we were doing so much that they let us do our thing; they didn’t sit over us.”

Going forward, he believes there is still a role for Sonofans. “I have a lot of experience with microphones and a background in mic technique. The A1 on a broadcast is inundated with comms, field mics and other stuff. I’ve said, ‘Let me submix the crowd.’ We’ve done some proof of concept, and I’m hoping we can turn into specialists in crowd sound capture and production.”