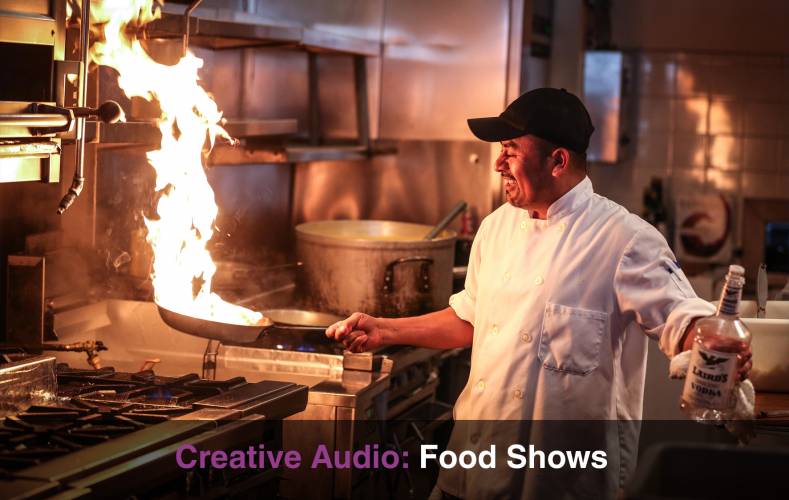 “If you can’t stand the heat, get out of the kitchen,” U.S. president Harry S. Truman famously said. But when there’s a cooking show to produce, audio engineers have no alternative but to improvise.

“I think the real big difference between a normal talking heads show and something like a food show is the physical activity taking place,” says Greg Allen, who worked as an audio supervisor and an A2 with sound companies Remote Digital Media and TV Tech on Food Network’s Chopped and TLC’s Next Great Baker. “You have to be a lot more aware of movement and liquids and sweat, heavy breathing and loud noises. If you’re doing the news or [CBS talk show] The Late Show [with Stephen Colbert], you don’t need to worry about that because they’re just going to sit down and talk at a normal level.”

Chopped, which debuted in January 2009, is a reality-based game show in which four chefs compete in three rounds — typically, to create an appetizer, entrée then dessert — using an unusual assortment of ingredients. The results are critiqued and scored by a panel of three judges. The show won two James Beard Awards in 2012, including one for the producers, the judges, the host and the network, and was inducted into the Culinary Hall of Fame the same year.

With the Chopped chefs working up a sweat over the hot stoves, the sound team had to reverse the more usual orientation of the RF setup’s lavalier microphones with which they were wired. “For the wire, we pointed them down a lot of times, instead of pointing them up at their faces, because we kept finding that sweat would drip off their faces and get into the capsule,” Allen says, adding, “We used omni capsules.”

The wireless transmitters also needed protection, he continues. “For Chopped we used these neoprene pouches with clips, like buckles, in the front. They were designed for aerobics instructors. We would put them just above the waistline — because they also would wear chef’s pants, which are like sweatpants, with no integrity to the waistband to clip anything onto. The pouches were also fairly waterproof, so that helped protect the transmitter.”

Audio frequently comes a distant second in importance to the visuals for television producers, of course. Allen and his colleagues did their best to be as unobtrusive as possible with the lav mics. “In the TV world, audio comes second to looks, but on Next Great Baker we strived to use white mics or colored microphones that matched the chefs’ coats. We were poking them through the buttonhole on the chefs’ coats and trying to get just the head of the capsule poking through.”

Next Great Baker, a spinoff from Cake Boss, pits multiple contestants — 10, a dozen or even more — against each other in a series of eliminations with the grand prize going to the last contestant standing. During Allen’s time on the show, which launched at the end of 2010, it was shot at various locations, including a culinary institute and at presenter Buddy Valastro’s own bakeries.

On Chopped, Allen and the sound team eventually transitioned to using white lavs, but initially they would use whatever was available. “In the beginning they were wearing darker gray chef’s jackets, so we were using black mics and just clipping them on, like you would for a talk show,” he says.

It’s always important for the sound equipment to work correctly, but it was especially critical on Chopped, Allen reveals. “The other thing with these food competition shows is that there’s a legal department there to make sure that everything is fair. If somebody has a microphone that falls off and we have to pull them out of the kitchen to put another microphone on them, they have to stop everything to be fair.”

On Chopped, each of the three rounds are timed, to either 20 or 30 minutes. “If you’ve got 30 minutes to make a dish and I pull you out to fix your mic, then you’re losing time. We really had to be cognizant of how we were going to do it so that [the equipment] stayed working for at least 30 minutes” After that, he says, “We were able to get in and do touch-ups and whatnot. But it had to stay there for that period of cooking time.”

Allen recalls that there were a number of microphones in addition to the lavaliers on Chopped. “We were able to either fly above the range or maybe plant some Sennheiser 416s short shotguns to catch nat [natural] sound. I do remember that the omni lav elements picked up more than enough,” he says. “I don’t know what happened in the edit with any of those plant mics, but they had it so they were able to cover cuts with wild sound.” Audio production teams on TV cooking shows have to be prepared to handle heat, sweat and noise.

In addition, he says, “We did have a shotgun [mic] on every camera, recording into the camera. So if a camera was doing a closeup they could grab the nat sound.”

The studio at Food Network in New York City where Chopped was produced was not that large, Allen reports. “The table that the judges sat at was maybe 15 or 20 feet from the first competitor. While the chefs were cooking the judges were also talking,” he says, commenting on the action taking place.

“They’ve got camera guys covering all three or four stations of the competition cooking, then they had one or two cameras covering the judges and the host. They were always worried about talking too loudly and giving hints away, so they would be whispering. Meanwhile, there are pots and pans clanging. That was a challenge. Luckily, we shot it and then it was edited, so they were able to cut individual mics out and not have to chase things on the fly.”

Range was never an issue with the wireless equipment, Allen also reports. “When we shot Chopped and Next Great Baker, we were able to wire the studios so that we had antennas right in the room. We had a whole RF world in the back where we could turn antennas on and off when we needed them. When they moved from the kitchen to do what they called OTF, or on-the-fly, interviews we could turn on the antenna so they could do their interview in the interview room, then we could turn it off. We were in New York City, so we wanted to keep our RF footprint as small as possible so that we weren’t picking up everything.”

The two shows were very different from the production and creative side of things, Allen observes, with Chopped shot like a competition show and Next Great Baker produced like a reality TV show. It’s no secret that reality TV show storytelling is done in the edit suite. On Next Great Baker, he says, “We had a room of story producers and they had an Aviom system,” an AoIP-networked personal monitor mixing system more typically found in recording studios or on stage. “We put all the chefs’ and judges’ mics into the Aviom system so the producers were able to key up who they wanted to listen to and write the story on the fly. They could then hand a paper edit to the editors.”

Typically, when producers are out in the field, they have headphones plugged into the camera. “But when we got into a studio and there were seven to 10 cameras, and multiple stories, we couldn’t listen to everything all at the same time,” he says, hence the Aviom rig. “The producers needed to hear what they needed to hear; it wasn’t like they could tell their camera guy to point at something. They had to be able to control what they were hearing.”

Having two dozen or more mics open and recording simultaneously might seem daunting, but Allen was unfazed by it. “I come from a music background, so I’m used to 128 inputs,” he laughs. In any case, he points out, it’s not like the inputs had to be synchronized like a music project. “It was 26 inputs not playing together; that was the key difference.”

These days, Allen is more typically found working as an A1. “Just this week I did Watch What Happens Live with Andy Cohen,” a late-night, interactive talk show that airs on Bravo. “I also do PA and stage work for The Late Show with Stephen Colbert,” which has been the most-watched late-night show for the past five years. “I’m just a fill-in,” he says, “so I do whatever they need me for.”

U.K. viewers will be familiar with another show that he worked on recently, Would I Lie to You?, the comedy panel show that has been airing on BBC One since 2007. “They are trying to reboot that here in the States. I mixed that, too, just before Christmas. Hopefully that will take off.”