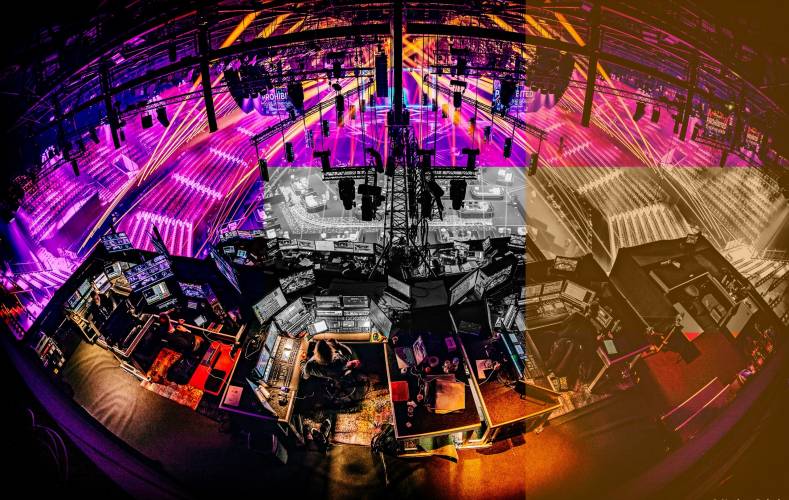 Video signals are known for using high bandwidth and bulky cables. It doesn’t take too many video feeds for a bundle of cables to become bulky and heavy. Then we add the audio; although the bandwidths are much lower than video, the cables are equally as bulky. The network connections come next for the myriad of computers, OCPs, and control and monitoring units. And most importantly, the audio and control cables for the intercom, without which, nobody would be able to work

Running these cables throughout a custom-built TV station is a difficult and time-consuming at the best of times, especially when we start running cables through the elevator conduits to move between floors. But running this number of cables through an auditorium with very little time is a daunting task. It wouldn’t be so bad if the TV riggers and engineers were working in isolation, but the ESC required a multitude of crews to create the sets, rig the lights and configure the auditorium, and that’s before the production teams arrived.

Pushing Technical Boundaries
ESC is not only renowned for its showcase glitz and glamour, but also for its technical excellence and for pushing the boundaries. First broadcast in 1956 to push broadcast technology to its limits, ESC helped align many European countries so they could exchange live video and audio signals, a solution unique for its time.

If instead of running hundreds of video, audio and network cables, single fibers could be used, many of the problems of rigging would be instantly fixed. Complexity, resilience, and costs would be fixed in an instant. In effect, this is what Riedel’s MediorNet has achieved.

In the previous article in this series, we discussed the benefits of mesh networks and how they assist broadcasters in localized network settings. Ad hoc auditorium events are generally self-contained with either a production crew on site or the camera and audio sources being streamed back to a centralized control room.

This year’s ESC production in the Ahoy Arena, Netherlands, needed 24 cameras, 140 intercom panels, 75 microphones, 5 mobile units, a technical operations center, 3 support vehicles, and 60 EVS channels. A total of 130 video feeds were required. If we just look at the cameras alone, each camera will need multiple return feeds for the camera operator, prompter feeds, tally, intercom, and program audio. Although most of these signals will be presented to the camera’s CCU they still need to be routed to it.

With each MediorNet device acting as both a node and signal interface, network fiber cables provided the connectivity between them. This facilitated the connections for SDI video, AES audio, control, tally, intercom and computer connectivity into the network. The management software not only provided an instantaneous health check of the entire network, but also allowed ad-hoc configuration after the initial installation.

Changing Production Requirements
Anybody who has worked on any outside broadcast, no matter how well planned, will know that things always change after the installation has been completed. Extra monitoring positions, intercom panels, and computer points are always needed. And if we factor into this the forty countries contributing and receiving audio and video for the event, then a completely flexible system is needed.

The major advantage of the distributed network is that extra feeds, receivers and monitoring streams can be added anywhere within the network at any time. Admittedly, enough capacity will need to be provisioned into the infrastructure, but even if it’s not then a single fiber and node can be installed with minimal interruption. Adding an extra video service requires connecting the physical device to the node and then configuring it on the software manager.

Despite the resurgence in streaming video and audio over IP, much of the equipment currently available in broadcasting still uses traditional SDI and AES interfacing. Although interface units to facilitate connection to IP exist, configuring full ST-2110 systems for ad-hoc events is time consuming and complex.

Aggregating Signals
The Riedel MediorNet system fixes this by providing SDI and AES connectivity into the TDM distribution system. Large capacity fibers with up to 400Gbps connectivity, easily facilitate the SDI and AES integration. Once the feed is in the network, the software interface is used to route the signals anywhere within the network. The simplicity of this cannot be overstated as the network autoconfigures to make the contributing signals available anywhere on the network.

Commentators often require last minute feeds and running cables to them at an event such as the ESC is impractical and potentially dangerous. With adequate cabling infrastructure, and with a full knowledge of all the network, the software management system was used to route new video, audio and even comms circuits to the commentators.

The commentary subsystem of the TDM infrastructure was complemented by an IP-based network built on the MediorNet IP product range. Inside the commentary control room, the FusioN standalone IP processing devices provided 16-PiP ST-2110 multiviewers, while the commentary booths relied on Riedel’s intelligent MuoN SFPs for bi-directional gateways from MADI to ST-2110.

Monitoring is always a challenge for ad-hoc events, and this was no different at ESC. With such a complex network containing in excess of fifty nodes and interface units, knowing where a system is experiencing problems is critical. Cabling in outside broadcast type events is always more difficult due to the temporary rigging that increases the susceptibility to damage. Being able to detect cable faults and automatically re-route signals is critical for today’s broadcasters, especially as we consider the ongoing effects of Covid-19.

Reliable Low Latency Delivery
As the TDM is synchronous and data packets are multiplexed into well-defined timeslots, latency becomes less of an issue as there is no contest on the network and therefore buffer sizes can be kept to a minimum. The distance between nodes is well known and the use of fiber means the transport delay is insignificant. Consequently, the whole system delivers low latency with incredibly high levels of reliability.

Delivering to over 183 million viewers across 36 markets demands the ultimate in resilience and low latency. Advanced monitoring methods and fault detection meant the MediorNet was the perfect solution for an ad-hoc event such as the Eurovision Song Contest.