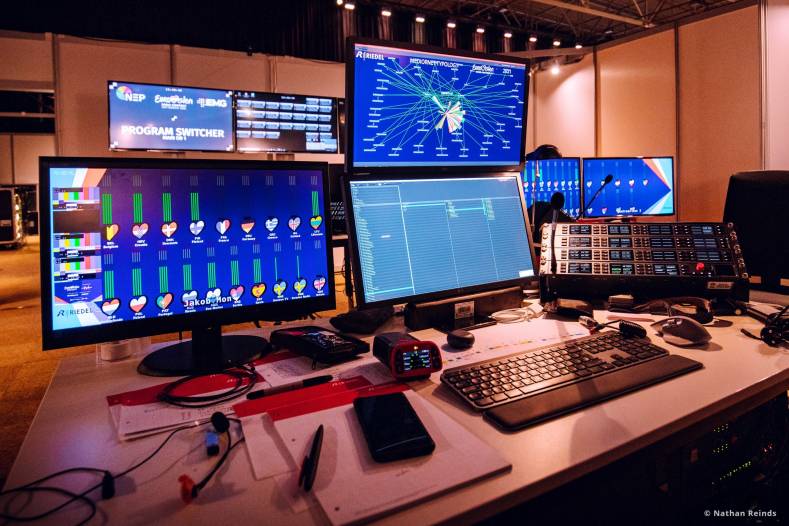 Staged May 18-22 at the Rotterdam Ahoy Arena, the 2021 ESC drew an audience of 183 million viewers across 36 markets — with a live audience for the Grand Final show on May 22 that was an estimated 4% higher than that of the 2019 competition. Riedel supplied a complete solution that included not only intercom and signal distribution, but also accreditation, access control, commentary systems, and a comprehensive IT infrastructure for staff, broadcasters, and attending press members.

In addition to managing radio communications, distribution of images inside the Ahoy Arena, and delivery of audiovisual signals for broadcast and production, Riedel outfitted commentator booths and oversaw communication with the master control rooms in each of the countries that customized the EBU broadcast. In addition, Riedel introduced several COVID-19 prevention measures designed to protect all technical team members and minimize the risk of infection at accreditation and access control points.

This year’s ESC production included 24 cameras together with 130 video feeds, 140 intercom panels, 75 microphones, 1,800 luminaires, five mobile units, a technical operations center, three support vehicles, and 60 EVS channels — a setup designed to shape a signal that could be seen all over Europe, Australia, and the USA with incoming connections from 40 different countries.

“The Eurovision Song Contest is a complex production, and it evolves from year to year with ongoing improvement to technical and operational aspects, as well as the fan experience,” said Yung Min Lee, Senior Project Manager at Riedel Communications. “This year’s event presented an array of new challenges, and we’re absolutely thrilled with how successfully the whole production unfolded.”