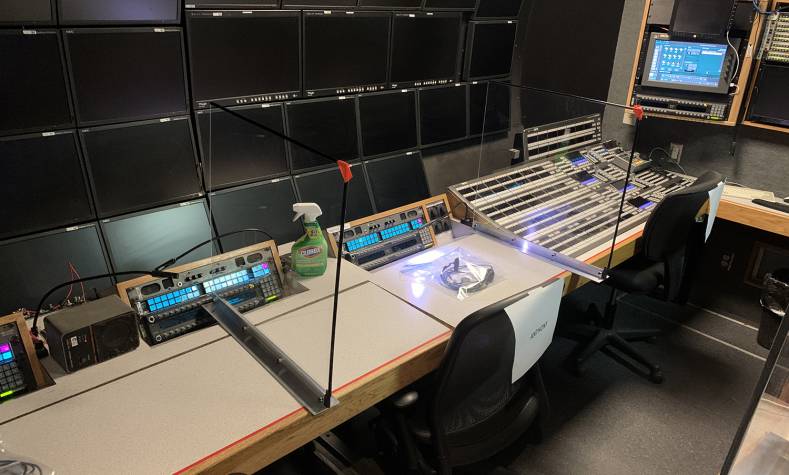 TV production companies have added features like Plexiglas dividers to separate crew and ensure their safety.

If there’s one thing the production community has learned during the pandemic, it’s that ensuring the safety of the crew on site or in the studio should always be first and foremost in people’s minds. The second takeaway is that sending less people on site and implementing more remote support is the new normal that the industry is, somewhat begrudgingly, coming to terms with.

Broadcasters and production companies over the past year have developed guidelines or protocols that ensure good health and a safe working environment. It’s the only way to keep content production alive and employees working in these challenging times.

However, navigating the myriad of mandates, or lack thereof, takes some careful discussion before a job is even started. Some, like ESPN, mandate that all crew be fully vaccinated while others leave it up to the production company to set the rules. Meanwhile some sports leagues, like the National football League, said it has “no intention” to require COVID-19 vaccinations for players, coaches or team staff members.

Indeed, it can be confusing unless your company has its own rules in place.

“I can’t legally demand that my staff be vaccinated, but if they want to work, it’s probably a good idea or they won’t be allowed on sight,” said Nic Dugger, President of Nashville, Tenn.-based remote production company TNDV (now owned by Live Media Group Holdings). “We still require masks, but if they are not vaccinated, we require daily testing as well. It’s become part of the call time.” 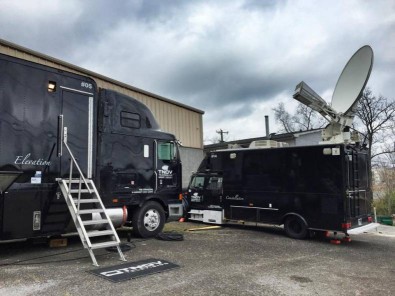 TNDV sanitizes its entire fleet of trucks before and after each job and has added Plexiglass dividers and hand sanitizers at every door to the truck.

TNDV now routinely sanitizes its entire fleet of trucks before and after each job and has added Plexiglass dividers and hand sanitizers at every door to the truck. It has also added UV light air handlers on the trucks to keep the internal air clean at all times.

“Looking to the future, I don’t think masks will be worn forever, but the health and safety of the technicians on site is always going to be the most important criteria,” said Kurt Heitmann, Chief Executive Officer at CP Communications, a production company that specializes in wireless frequency coordination, based in St. Petersburgh, Florida.

“We’ve learned as an organization that by doing extensive pre-production work, we can accomplish more (or the same) with less people,” he said. “We’ve also learned that mentally, these past months have taken a toll on our staff. The culture of your company should be one of recognizing people’s emotions and risk tolerance. You have to know your staff and manage accordingly.” 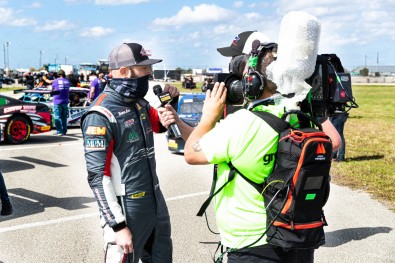 CP Communications worked with Greenlight TV to support live production and streaming for a Trans Am race event in Sebring, Florida, where the crew conducted all on-site interviews using face coverings and masks.

In order to keep their production studios open and working, most major media companies now include a position called a COVID Compliance Officer, who is responsible for working with producers, coordinators, production assistants, and 1st ADs about on-set protocols related to COVID 19 as well as provide tools and resources for risk mitigation. This person is typically not associated with the production team and acts as an independent third-party to ensure compliance on the set or remote sight with federal (CDC), local and state guidelines.

That’s why, despite governmental regulations, production companies are developing and adhering to their own guidelines, based on the regulations. For example, even though the state of Florida has relaxed its regulations, CP Communications is maintaining a safe work environment by still being extra careful and doing everything scientists say is helpful in warding off the virus.

“We don’t feel the pandemic is over yet,” said Heitmann. “As a company, we cannot mandate that our employee get vaccinated, but we’ve told them “if you want to work on these shows, it’s a good idea that you are.”

CP Communications is sending less people out on projects and doing more “non-recurring engineering” work, where they set up the equipment once at their home base and then reuse it in the field as much as possible. They can tailor equipment packages based on less people on site and more remote support from our NOC.

“What we’ve learned is the best way to do these productions is with less people on-site and more remote support,” said Heitmann. “And that’s the way it will continue to be moving forward.”

Navigating The Limitations With Remote Technology

The company has developed a flyway kit, called the Remote Access System (RAM), that includes a 1RU rack with an internal processor, a spectrum analyzer and a GPS device for finding and monitoring RF frequencies used for microphones, bonded cellular camera transmitters and other wireless devices. Once hooked up, the team can see all of the signals back at its NOC facility—CP maintains three facilities: one in Canada, one in New York state and a third in St. Petersburgh—and manage the spectrum remotely. They can look at the network traffic flow while the equipment is being set up on site and we make sure all GPS coordinates are established correctly for the project at hand.

“Because we can’t go onsite for a survey beforehand, our team has written software within the RAM box that scans the network once the crew gets on site,” he said. “If we see a problem back at the headquarters control room, we can communicate with the guys onsite and make corrections as necessary.”

To help produce primetime TV shows like the Country Music Awards (CMA), the Association of Country Music (ACM) and the national Emmy and Documentary awards—with no live audience—TNDV used NewTek’s TalkShow product, which allowed them to support virtual press rooms for each show that enabled the celebrities to speak with the media… on a Zoom screen.

The productions were all done virtually, with a mobile production truck parked on site but no cameras. Dugger calls it “a very different approach to doing live awards shows.

“We had a rack of seven TalkShow systems, used in conjunction with one another, and per category would bring in the nominees (six or seven at a time),” said Dugger. “The feeds would go into a Grass Valley K-Frame production switcher. As the host announced the winner, we would zoom in full screen to that person as they gave their acceptance speech. Meanwhile we were dropping the connection of the other nominees and quickly connecting with those involved with the next category.

“And not a single camera was set up,” he said. “It was very heavy audio mix with lots of video switching. Our “Exclamation” 4K/HD truck was set up in the TNDV parking lot connected to a Gbps network. It was hectic but all worked perfectly.”

Unfortunately for production companies, clients have grown used to spending less on projects during the pandemic, so they’ll want that to continue. CP Communications’ Heitmann said the company is now operating at about 65 percent of the revenue that it did prior to the pandemic, but it has decreased its costs.

“We’re just glad the business is coming back, albeit slowly,” he said, adding that they have a lot of jobs lined up for the summer that were supposed to be done last year before the pandemic hit. “Yet, we recognize that we’ve been doing these shows for less money for more than six months now. Why would Fox Sports or ESPN do it the old way when they are saving money and still getting the coverage they need?”

Perhaps the most important lesson learned from the pandemic has clearly been a focus on staff safety like never before.

“What we’ve all learned are better hygiene habits and sticking to the rules, no matter how cumbersome they might be, and I think this will be the case for the foreseeable future,” said Dugger. “Now the staff won’t show up to work sick, like they might have before the pandemic and power through it. They stay home knowing that they could get someone else sick. What’s changed is that we’re more understanding of the fact that we’re a global society and if you’re not feeling well can have a terrible effect on the entire crew. We never wore masks before, but I bet we’ll see people wearing masks for a long time. And we’ll see a lot more respect for each other as well.”