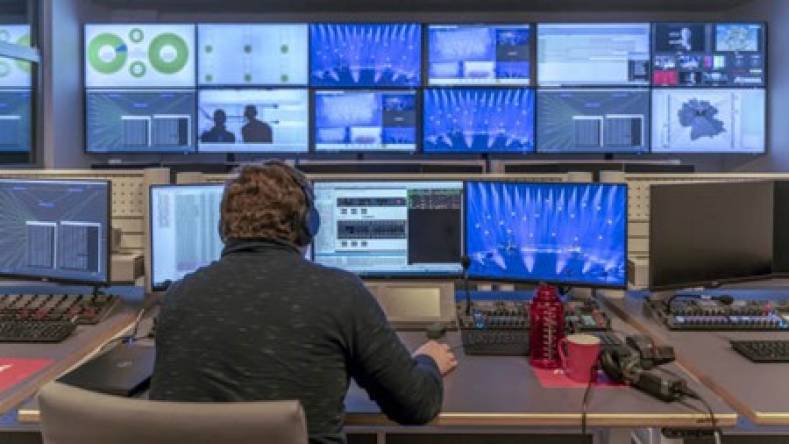 That was the overwhelming consensus emerging at a panel staged near the end of December 2020.

The general mood was captured by one of the panel participants, Bryce Button, director of product marketing at AJA Video Systems, manufacturer of video acquisition, conversion, I/O, and streaming products. “A continued emphasis on remote production workflows will endure throughout 2021,” said Button. “Balancing personnel on set or in venue with streamlined remote control centers will continue to merge feeds and talent from across many regions. The past year has been an intense laboratory for deciphering the best methodologies and workflows for minimizing staff on-site, while innovating new technologies and data-driven features to augment at-home audience viewing experiences.”

The same point was made by said Phil Ventre, VP of sports and broadcast at Ncam, which enables virtual production through real-time camera tracking. But Ventre placed particular emphasis on the need for some semblance of the previous normality to complement the new spirit of remote working. “The push towards remote production has proved that live news and sports can be delivered with a much smaller onsite footprint, and it has happened a lot faster than before the pandemic,” said Ventre. “There are many upsides to this, but from a social perspective I don’t believe that working remotely, without regular workplace interaction, is good for our collective mental health.”

In terms of technology and working practice, the pandemic accelerated trends that were already in train, such as embracing cloud-based applications with IP delivery for additional flexibility. “The move to the cloud and remote production are all things that our customers were already putting in their long-term plans, but COVID was that inflection point that caused them to act immediately,” said John Wastcoat, SVP of alliances and marketing at Zixi, a provider of live video over IP distribution technology.

AJA’s Button highlighted how increasing adoption of SRT (Secure Reliable Transport) and other protocols are making the public internet secure and robust enough as a transport mechanism for production processes. “For fully IP-based workflows, the coming adoption of compression standards within the ST 2110 space and the push into AV for streaming, alongside NDI, SDVoE and other IP-driven technology, will continue to expand. Additionally, 12G-SDI and Fiber solutions will continue to accelerate workflows for point-to-point needs within venues and between locations. To meet the ever-increasing demands of high bandwidth content, 12G-SDI Fiber further simplifies workflows by transporting 4K/UltraHD HFR (High Frame Rate) content over a single cable up to 10km,” Button added.

Remote production can help virtualized live events replace or the real ones outlawed by governments while the pandemic is still ongoing, or complement them afterwards, but it has taken time to establish the technology at scale. However, a major demonstration of live virtualized production was staged in late November 2020 by Riedel, Remote Recording Network (RRN), TV Skyline, The Black Project, and 13 other partners working remotely across four countries and three continents.

This was a fully decentralized production of a live, global music event opening with Purple Schulz playing at the One2One Studio in Bottrop, Germany, while Stephan Ullrich and Daniel Klein provided a performative reading the following day. iPads in seating positions around the stage enabled interaction between the audience and the artists, adding an immersive element.

The production team on site worked with a small cast directed remotely in real time from Vienna, while lighting was designed in Munich and controlled from Frankfurt, with sound recording managed from Valhalla Studios in New York. The TV Skyline Skycenter in Mainz provided the hub for camera control, image mixing, and stream delivery. Quality control and remote audience management was executed in Berlin.