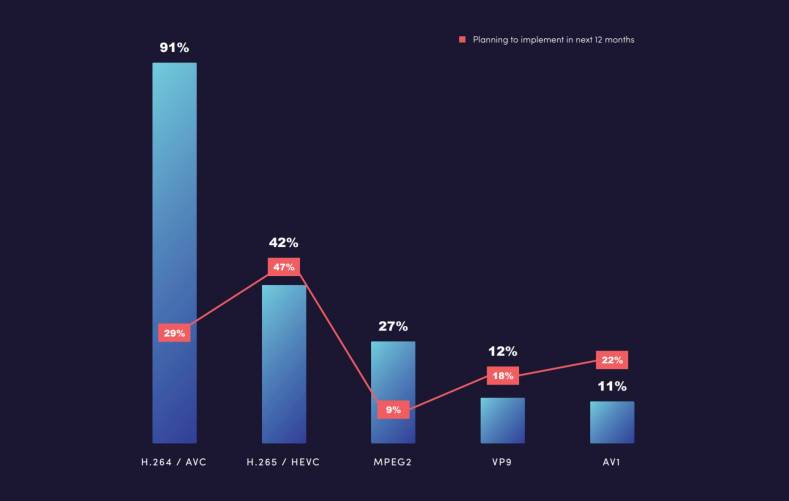 Fragmented support from browser and device makers is holding back advanced new codecs, according to Bitmovin.

H.264 continues to dominate the video codec field, accounting for 91% of all usage by participants, despite all the hype around newer more advanced codecs such as H.265 and AV1.

This is according to the latest Video Developer report from transcoding technology specialist Bitmovin, based in San Francisco.

The report does concede that H.265 has gained significant traction, coming in number two at 42%. But it has failed to meet earlier elevated expectations, given that it has been available since first release in 2013 and gained strong initial adoption from broadcasters. The streaming world though has gravitated towards the alternative non-MPEG camp under the Alliance for Open Media (AOMedia) representing the internet technology giants, promoting AV1 as an open and supposedly royalty-free video coding format for online transmissions.

The Bitmovin report conceded that these new codecs are more efficient, as confirmed for example by Facebook in tests approximating real world conditions finding that the AV1 reference encoder achieved up to 50.3% higher data compression than H.264. But Bitmovin also pointed out that both browser and device makers were “fragmented in their support" for these newer codecs, arguing this was a major factor behind their lower adoption rates.

Another factor could be computational cost in the case of live streaming. Facebook admitted that AV1 required greater computation as a result of the increased complexity, leading to longer encoding times. This can be an issue for live streaming where low latency is critical. Indeed, the Bitmovin report found that 60% of video developers now have a latency expectation of five seconds or less.

That is higher than a year ago, but more significant still according to Bitmovin was the finding that almost a third of respondents now expect one second or less latency for their streams. That is harder to achieve with a computationally costly codec.

Among other codec-related findings, cloud-based encoding is still gaining ground but more slowly, with implementations up 3% to 32% from 2019. On the other hand, hardware encoders seem to have passed a peak, with implementations down 9% over the year after rising 5% from 2018 to 2019. But as Bitmovin noted, this could reflect the temporary impact of the Covid-19 pandemic reducing the number of live events being held.