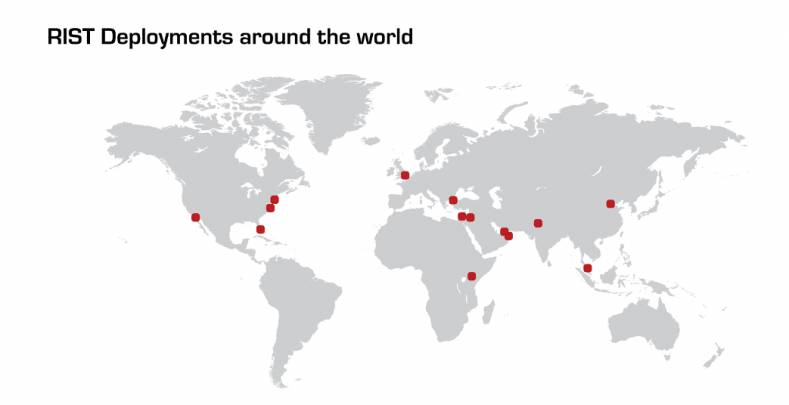 The RIST spec is now deployed in dozens of global locations for a wide variety of broadcast services.

In 2017, at that year’s VidTrans conference a regional gathering of members of the Video Services Forum (VSF), a new protocol for delivering audio and video over lossy IP networks (including the public Internet), was born. It was an idea that many had been skeptical of, since the open Internet brought with it all kinds of quality, security, latency and reliability issues.

Proponents argued that the benefits of reduced cost by using COTS hardware and avoiding renting expensive private network bandwidth (via H.264 and H.265 compression) to deliver live streams for sporting and corporate events, outweighed the negatives. Another advantage is that it is agnostic to bit rate or resolution formats. A broadcaster could send HD video one day and 4K video the next over the same networked system architecture. So quality was not an issue either.

At an interoperability test of third-party technology, the Reliable Internet Stream Transport (RIST) Protocol Specification was tested and published publicly. RIST, they said, was designed to provide a common industry specification for low-latency live video contribution over the Internet. A RIST Activity Group was set up within the VSF to spearhead development efforts.

The benefit of RIST is that it is an industry specification that is supported by many companies, rather than being a proprietary protocol designed by one vendor or another. That allows customers to pick the product they want to use and know that it will work with other RIST-compatible devices.

While developing the new spec, the RIST Activity Group said one of its goals was to avoid inventing anything new if it didn’t have to. For example the SMPTE 2022-2 standard, designed for compressed video transmission, is supported in RIST. 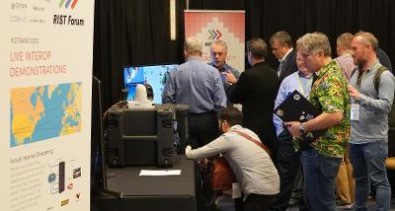 A growing number of RIST-member companies have gathered each year since 2017 to stage interoperability tests at trade show exhibits to prove the seamless workflow possibilities of an open content delivery of IP infrastructure.

Today, proving its maturity, the RIST spec is being used around the world for 24/7 linear channels for satellite uplink from playout; Interactive (two-way) news interviews; live sporting events and long-form studio programs as primary path(s) to air.

RIST developers said they designed it to be a more reliable and open successor to the Secure Reliable Transport (SRT) video transport protocol as well as an open-spec and open-source alternative to proprietary commercial options. And, they predicted correctly, things would only get better as technology improved.

“One of the nice things about RIST is that there is lots of flexibility to choose the features they need and customize the workflow to a specific application,” said Wes Simpson, President, Telecom Product Consulting and co-chair of the RIST Activity Group within the VSF. “It’s not a one-size-fits-all protocol.”

Basically, SMPTE 2110 assumes that the network is error free, so there are mechanisms in the ST 2110 spec to compensate for this. However, at its fundamental layer, it sends each pixel once and that’s it. With RIST, it’s assumed that the network is going to lose packets somewhere along the delivery chain and so the VSF has figured out a way to intelligently retransmit those packets that have gone missing. 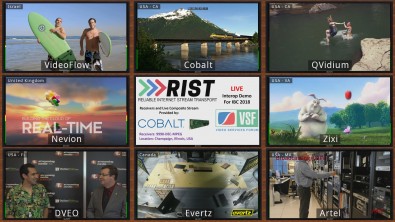 At the IBC 2018 show, RIST members from all over the world streamed content over the internet to a bank of Cobalt 9990-DEC-MPEG decoders at Cobalt headquarters in Champaign, Illinois. The resulting feeds were combined into a mosaic using the Cobalt 9970-QS multiviewer and published to YouTube using the Cobalt 9223 encoder.

The protocol continues to develop. In April the VSF released new technical recommendations for RIST, called Technical Recommendation TR-06-2:2020. This adds to the RIST Simple Profile (TR-06-01, released in 2018), adding features such as support for in-band data, encryption, authentication, and bandwidth optimization. It also supports high bitrate streams, making it possible to use RIST for uncompressed or lightly compressed content.

The VSF says that whenever possible, RIST Main Profile is built on top of existing Requests For Comments and Standards to ease implementation. This is especially important for encryption and authentication, since the use of proven, widely implemented technologies greatly improves the security of the solution. 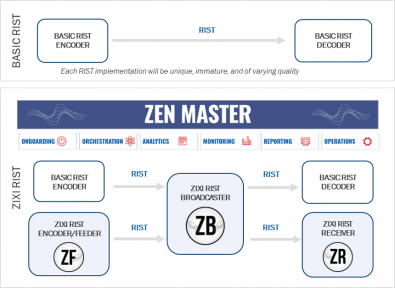 Zixi, one of eight companies now supporting RIST in its product line, offers two levels of the spec: the basic Main Profile and Zixi RIST, with additional value-added features provided by the Zixi protocol.

He added that as media companies seek to produce content from an ever-multiplying range of new locations, RIST offers a flexible set of capabilities while allowing content to be easily shared across terrestrial and cloud platforms as well.

At the 2019 IBC show last fall, VSF member companies—which now number more than 20, including broadcast networks like CBS, ESPN and Fox, as well as technology vendors like Cobalt Digital, DVEO, Evertz, Net Insight, Nevion, QVidium, VideoFlow and Zixi—participated in a successful demonstration of Main Profile. This demo was followed by an interoperability test in February 2020 by many of the same vendors, culminating in a live, trans-oceanic demonstration conducted at the VidTrans 2020 conference (February 25-27) at the Marina Del Rey Marriott, Los Angeles, CA.

“There’s eight different companies that have implemented RIST today,” said Simpson. “Those are all independent implementations, so the code base is different, yet they still comply with the RIST spec so they talk to each other easily.”

The latest features of RIST Main Profile provide a set of capabilities that give users the ability to operate and control every stream with reliability, flexibility and security. They are now working on the new RIST Enhanced Profile, said to be considering features like auto-configuration, adaptive encoding, and support for satellite links.

Simpson said there’s been a lot of interest from within the open source community to use RIST. There are many on-going projects regarding FMPEG, VLC and Wireshark 4.0.

“People are finding that they really like our security model and the ability of RIST to work in a variety of different environments,” he said. “It’s much more flexible in how you can use it.

The VSF is now working on a document that describes different profiles or levels of complexity within an IP workflow. There’s a simple profile and a main profile. Inside that main profile, less complex implementations can use a basic profile and more complex ones can use an extended profile.

“There’s been a lot of work done to make sure that different devices can more easily communicate with each other,” Simpson said, adding that going forward VSF is looking at using the cloud more to spin up and spin down broadcast services.

At the end of the day, RIST was created by a panel of experts from multiple companies, and it has benefited greatly from their combined experience. Current results of a series of live tests have been very positive, and several remote productions of sporting events have been successfully completed. While it’s not an ideal file transport solution for everyone, compressed file delivery works for a lot of users—especially in light of the current stay-at-home mandates being carried out around the world. The VSF has promised that future versions of the RIST spec will include additional features that cover a wider range of user applications.

The VSF Technical Recommendation spec now includes the minimum set of capabilities that any software or hardware system must implement in order to be considered RIST-compliant. The spec is available for free download.