This reporter is setting up for a solo live shot from her kitchen. Who would have thought 'phoning it in' would become the new normal?

While the in-crowd was partying like it was 1999, I was in meetings at corporate HQ with other CEs, station business managers and Perot Systems consultants developing comprehensive Y2K bug strategies for TV stations in the group. We spent nearly a year planning details to the point that if the post office and gas stations closed, salespeople would ride bicycles to collect sponsor payments. Stations and groups planned for every imaginable electronic and public contingency that could possibly impact station operations and IT consultants made tons of money helping.

On Y2k New Year’s Eve, news vehicle fuel tanks were topped, armed police guarded towers and guy wires, all engineering hands were on duty, and organized notebooks of contingency plans were open to take on Y2K bugs. About 10 minutes into the new day, the Y2K threat turned to yawns across time zones and life remained normal.

What TV Y2K bug crisis planners never considered was crew health. Stations assumed the general public might get unruly, but broadcasters are reliable troopers known to rise to every occasion. Nobody planned for a biological pandemic. The Y2K+20 surprise pandemic is the new bug and people are the crisis, not the electronics. It’s the polar opposite of Y2K. Its spreading devastation eclipses the most frightening pre-Y2K hyperbole, and you can’t fix it with money.

The early universal results of Y2K+20 at TV stations are dramatic changes in assignments, staffing, work schedules and work locations through all TV station departments. Physical distancing is changing the look and feel of live TV shows and newscasts locally and nationally, and viewers like what they see. It's also changing how live and near-live TV shows are technically produced. The prompter feed for one station's home studios is an IP stream from a repurposed spare security system encoder.

I recently spoke with some people at network affiliates I’ve known for years who will remain anonymous. Did anyone have a Pandemic Plan? No, but everyone is adapting to the current situation and doing well at it. Physical distancing and isolation are providing a rare opportunity to add new dimensions to the tired, old, shoulder-to-shoulder local TV news team set and green screen paradigm. In normal times until about a month ago, people would likely be fired for trying anything like it.

Newspapers are shutting down or scaling back, but common internet speeds support all kinds of new remote TV production possibilities that live TV broadcasters are breaking new ground with. The result is viewers and fans getting peeks of air-personalities and guests at-home lives, which humanizes the person in front of the camera. Stations are experiencing impressive local news ratings growth and in some instances, ad sales are increasing.

As the TV industry goes through this unprecedented change, TV news broadcasters make it look easy because the people and technologies behind the scenes have adapted to continue producing and airing shows seamlessly.

Everyone is anxious. Most stations aren’t allowing visitors or guests, but stations aren’t bubbles. If one crew member gets sick, everyone exposed must quarantine at home for 14 days. The same goes for tower crews working on the final phases of repack.

Everyone, including many people on TV, is talking about “social distancing.” That term is misleading. TV station crews must maintain close communications electronically to collaborate together while keeping a healthy personal physical distance. Physical distancing, face masks, gloves, disinfection, isolation and minimizing shift overlaps are the only available protections TV station managers and crews can control.

Managers have two challenges. First is using the above protections to keep crews healthy. The other is to not become the last resort if crews are sidelined. Managers with higher risk factors must avoid being the last person standing by insisting that every crew member is protected as much as possible. Nobody wants to endanger themselves, crew members or anyone else. Station leaders must stay focused on cautions and precautions.

People at stations are constantly disinfecting workspaces, and many stations are also using professional services for building disinfection. Face masks and gloves keep everyone safer. Isolation and/or physical separation are rapidly becoming the new normal for the foreseeable future. IP makes much of it possible.

At many stations, field news crews are working outside the building. They take a company vehicle home and work on assignments as teams or solo. Most stations also have anchors reporting live from their homes to reduce the number of people in the building and support physical distancing.

One station I spoke with uses a Blackmagic Design Web Presenter to encode both the control room multiviewer and studio program feeds to IP, and a security system encoder to provide a teleprompter feed to remote anchors over the internet. IP lets producers work at home by providing a feed of the control room monitor wall to view live sources as they work.

The garage at another station has HVAC separate from the building and it has been set up as a makeshift control room/studio. It’s been tested and is ready if the building needs evacuation for a disinfecting procedure. The station also has its satellite truck positioned at its remote transmitter site as more insurance to stay on the air outside of the studio facilities.

A station in a different market is located across the street from a theater which was often used for live shots and already hardwired to the studio. Its ready for move-in if they need to move the studio facilities. Every station is different, and everyone I’ve talked with has or is working on plans to evacuate the building and stay on the air. Many stations are also testing other remote solutions in case they become necessary, such as automation coding, web GUI controls and remote monitoring.

For some crew people such as news editors, working from home can be an easy transition. For others such as master control operators, working from home may be impossible. How it works at each station depends mainly on its infrastructure. It’s a little late to order a new Capex-size, remotely-controlled production and playback system, and have it up and running by the end of today. Engineers and crews must adapt what they have on hand to do the job at hand as much as possible. Its not a problem to throw money at.

Nearly all stations are using bonded cellular systems, Skype and FaceTime for interviews and field reports. A station I spoke with uses LiveU backpacks or the LU-Smart app for all its home live shots. The station uses Skype and FaceTime for guest interviews, but LiveU recently added a user-friendly Guest Interview feature. It sends the interviewee an email or text that prompts them to download the app and walks them through preparation to go live. The station then uses the LiveU Central control web page to initiate the live interview. Reporters are issued iPhones with LU-Smart to go live anytime. The station also uses several iPads for the same purpose.

Nearly all stations are using bonded cellular systems and a variety of streaming services for similar news and live program production and interview connections. Most stations are also experimenting with new ways to control and repurpose gear they already have on hand to do things they haven’t done before. 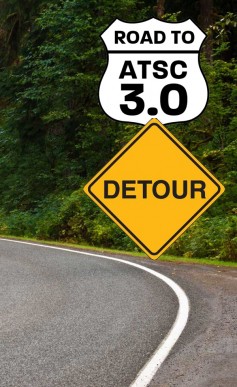 Who knows when the health dangers of the pandemic will end or what effects it will have on economies? Predictions are across the board and clearly nobody knows. But, between now and however it all turns out, the TV industry is changing itself without the force of any new technologies or regulations. That’s a first, and a rare opportunity for young TV pioneers to make a significant impact on content creation everyone can see without anyone needing to buy a new TV or a new production widget. There will be plenty of time to pioneer ATSC 3.0 later, after we learn our lessons from Y2K+20, and when the audience can afford to buy new TV sets that haven’t been built yet. ATSC 3.0 and NEXTGEN TV progress and opportunities are another worldwide story currently being rewritten.

In the meantime, there has never been a time in broadcast TV history needing more new creative solutions than right now, and people at stations are on top of it. Building the brand and growing the audience is what local TV broadcasting has always been all about, and it's our own big silver lining in an otherwise dark cloud.