The RGB formats are based on three signals, each of which controls the output of one primary color. It is a characteristic of the HVS that the amount of detail in a picture is assessed primarily from changes in brightness. The acuity of the eye when it comes to discerning changes of color across the screen is nowhere near as good and a suitable perceptual compression system can take advantage of that.

Color cameras, whether based on three sensors or using a Bayer pattern, output video in the RGB format, which will usually be gamma corrected to R', G' and B'. Whilst that format gives the best results for production processes such as chroma key and color correction, it is not necessary or desirable for final delivery of video to the viewer.

Fig.1 shows the block diagram of a color difference matrix, which takes in three signals and outputs three signals. R', G' and B' are input to a weighted addition to create luma, Y', and this is then subtracted from R' and B' to produce R' - Y' and B' - Y'.

Only luma requires to be sent with full bandwidth, as it determines the perceived sharpness of the picture, whereas in the R', G', and B' format all three of those signals must have full bandwidth.

The luma signal is substantially the same signal that would have been obtained using a panchromatic black and white camera, i.e. one with the same spectral response as human vision. Clearly such a signal alone could drive a black and white display and equally clearly has to be sent with full bandwidth, which determines the perceived sharpness. This also means that backward compatibility with black and white displays is readily obtained; something that was important in the early days of color television.

Such a luma signal could also produce a sharp black and white picture on a color display if it were fed to all three primaries. This also meant that legacy black-and-white material could be displayed on a color set. By definition the color display would remain at its white point. To obtain a color picture, the display must be moved away from the white point, without changing Y'. This means that the proportions of R', G' and B' must change without the weighted sum changing.

The key point is that shifting the display from its white point does not have to be done with high resolution. The R' - Y' and B' - Y' signals can have significantly less resolution than Y' and no-one can see it. The theory is, however only correct for linear light, and the use of gamma compensation takes the system some way away from the ideal. Nevertheless the use of color differences is still worthwhile.

Only two color differences are needed, because in decoding, once R' and B' are known, G' can be obtained by reversing the luma summation. In principle any pair of color differences could be used. In practice G' - Y' is not used because G' and Y' are very similar in typical pictures, causing any G' - Y' signal to be small and prone to noise, hence the selection of R' - Y' and B' - Y'.

To give an example, assume for the moment that all signals are sent with full bandwidth and that the screen is showing mid gray meaning that both color difference signals have a value of zero. Suppose that we now want to make the screen greener whilst at the same time Y' remains constant. R' and B' both have to get smaller as G' increases.

At the display, R' and B' are obtained by adding Y' to the color difference signals. As Y' is the weighted sum of R' G' and B', we can obtain G' by subtracting R' and B' from Y', so we get back to our primary signals to drive the display. With full bandwidth the system is fully reversible. Whatever happens to R', G' and B', they must sum to Y' and Y' is sent with full bandwidth so there can be no loss of detail.

If the color difference signals are reduced in bandwidth, that doesn't change the detail carried in Y'. What happens is that the balance between R', G' and B' changes with less resolution, which the eye can't discern.

Fig.1b) The full expressions for the three signals that can be used to interpret Fig.2.

The color difference signals must be bipolar, i.e. they can be positive or negative. In the analog domain the voltages go above and below zero. In 601, offset binary is used, so in an 8-bit system 128 decimal represents zero color difference. Numbers below 128 represent negative values.

Making the gray scale vertical has the effect of standing the R'G'B' cube on its black corner with the white corner vertically above. Fig.2 shows that the weighted sum used to create Y' puts the Red, Green and Blue points at different places on the Y' axis, such that the triangular color space joining the primaries is not parallel to the color difference plane, but is inclined. The R'G'B' cube is distorted so the sides become rhombic. 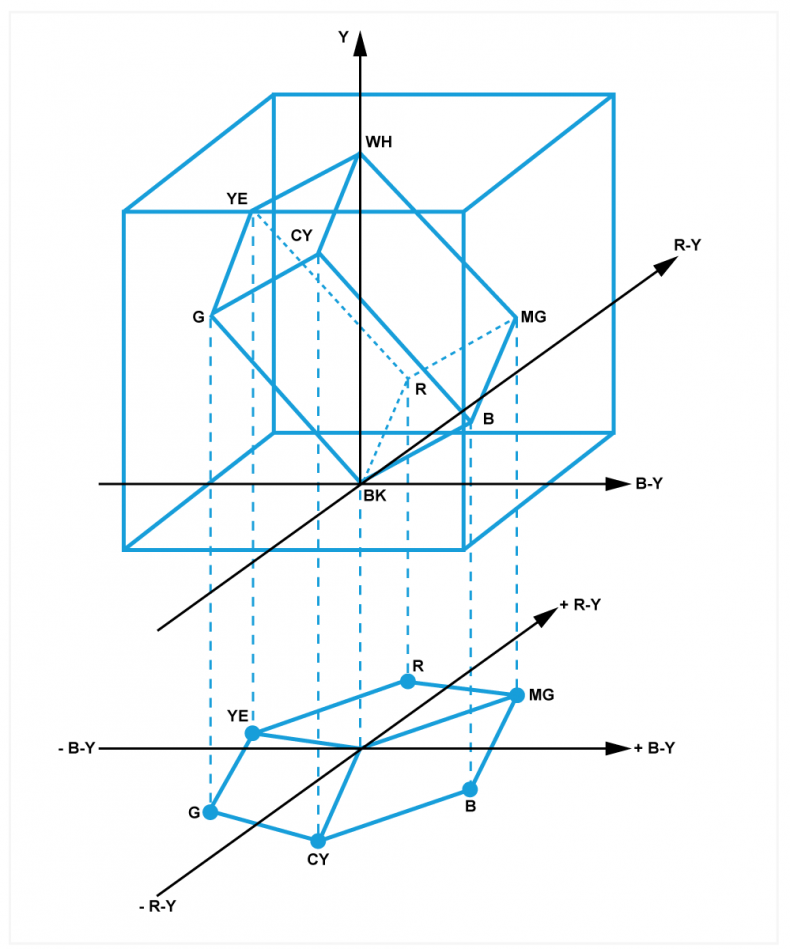 Fig.2 - In color difference space the Y' axis is vertical and the R', G', B' cube is stood on its black corner. The shadow of the cube is the hexagonal vectorscope display.

When viewed from above, looking along the Y' axis, the six remaining corners of the cuboid form the familiar hexagon that a saturated color bar signal will draw on a vectorscope. Note that the green vector is at 45 degrees between the color difference axes because both color differences have the same value for primary green.

In analog video the bandwidth reduction of the color difference signals was done with a low-pass filter that only filtered in the horizontal axis. Vertical filtering was not practicable. In the digital domain vertical filtering can also be used, although the use of interlace in legacy formats made that difficult. All filtering of video signals needs to be phase-linear, otherwise different frequency components are shifted across the screen.