From the Women’s World Cup, Wimbledon to the FA Cup Final and more, 2019 has seen some of the highest viewership stats in sporting event history.

This audience surge is attributable in part to the proliferation of OTT and consumer devices that provide more access to content, as well as the appeal of the perceived higher quality image facilitated by HDR production. With this continuing trend, embracing HDR will be crucial to live production professionals to remain competitive now, and futureproof their workflows for the years ahead, even if SDR remains the dominant deliverable. With HDR displays becoming more affordable and commonplace, HDR adoption in production is moving quickly, driving new momentum around an emerging live production approach dubbed the “single master” HDR workflow.

The concept is simple: streamline simultaneous live HDR and SDR production by leveraging a device like AJA’s FS-HDR to convert HDR and SDR cameras and replay systems to a common HDR production format in real-time. When necessary, the workflow also supports seamless roundtripping of signals from SDR to HDR and back to SDR to accommodate graphics systems, package highlights and more, which may only be available in SDR as a source for integration into the HDR/SDR pipeline. This enables the production to be done with HDR as the primary approach for mastering and future proofing, while simultaneously providing a final HDR to SDR conversion for transmission to the larger viewing audience.

Prior to the introduction of the single master HDR workflow, developing an HDR pipeline that could support simultaneous live HDR and SDR production was no walk in the park. Companies often took a dual production approach and some still do. Such a workflow requires two production trucks or spaces, associated crews and a host of expensive equipment. The cost and complexity of this method makes it unattainable for live production professionals without sizable budgets. While camera manufacturers have worked to resolve this challenge with 4K UHD cameras that can simultaneously output SDR and HDR, these signals don’t always match up, hence the need to be able to convert between Perceptual Quantizer (PQ), Hybrid Log Gamma (HLG) and Sony’s S-Log 3.

The single-master HDR workflow makes HDR production more accessible to all live productions, because it only requires one switcher and one production format. Professionals can easily convert between HDR and SDR, and the images match up, so they get the quality picture needed for simultaneous streams of production with less gear, technology fuss and overhead. For these reasons, we’re seeing a large number of professionals in live production adopt AJA’s FS-HDR.

FS-HDR is a powerful converter in a 1RU chassis that supports conversions between SDR to HDR, HDR to HDR, and HDR to SDR for 4K/UltraHD and HD workflows. Some call it the Swiss Army knife of HDR production because it also supports frame synchronization as well as up, down and cross-conversion, with SDI transport that supports1.5G, 3G, 6G, 12G or dual link 3G, 6G or quad 1.5G, as well as 3G over copper and fiber.

Earlier this summer, outside broadcast powerhouse Arena Television put its single master HDR workflow to the test to deliver live simultaneous broadcasts in HDR and SDR for BBC Sport’s coverage of the FA Cup Final, leaning heavily on the FS-HDR. BBC Sport chose to acquire footage in HDR for the FA Cup Final for OTT delivery, but also produced an HD SDR feed, as it knew a majority of the audience would watch the match in that format.

“FS-HDR was the key to unlocking the entire concept, giving us the highest possible quality HDR up- and down-mapping to bring audiences much more dynamic HDR and SDR pictures,” shared Dafydd Rees, Deputy Director of Operations, Arena TV. 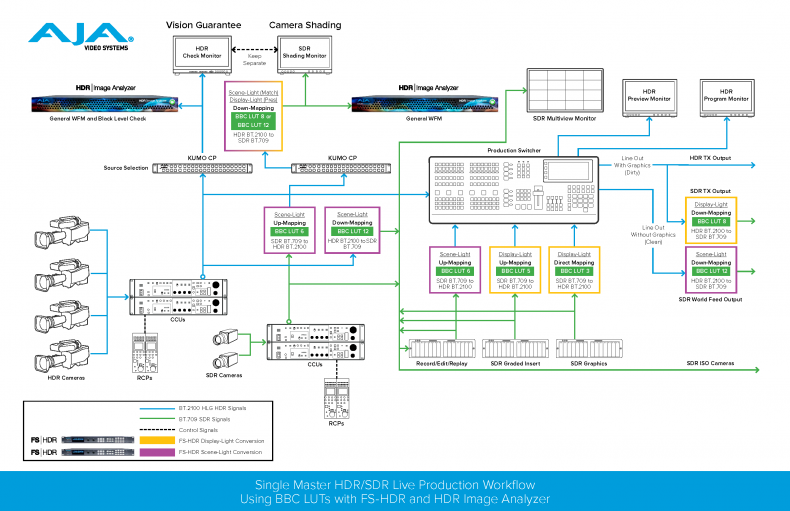 Arena’s workflow included a myriad of equipment, starting with Grass Valley cameras that output the main feeds in HLG or PQ HDR. 3G-SDI outputs were then fed into AJA FS-HDR for conversion to SDR for shading. For replays, slowed down replay materials were fed through FS-HDR for pass-on for simultaneous SDR and HDR output. Additional materials that required HD to 4K up conversion were then run through an AJA FS4 to ensure pristine 4K output.

Pre-recorded SDR materials were fed from an EVS device to an FS-HDR for SDR to HDR transformations. After the content was routed through other equipment, an AJA Hi5-4K-Plus enabled SDI to 4K HDR HDMI monitoring. Graphics for each broadcast started as 4K SDR sources that were sent through a combination of FS-HDRs and FS4s. The FS-HDRs supported 4K SDR to 4K HDR conversion and processing of the graphics fill, while an FS4 was used to control the key delay for final sync up of the two items that are then fed into an EVS server. 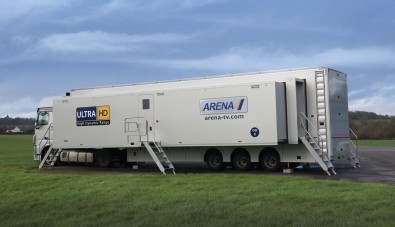 “We picked FS-HDR because we know AJA FS gear is reliable, plus FS-HDR’s dual power supplies also give us redundancy,” noted Rees. “Overall, we found FS-HDR to be a powerful device that does all that it claims to do; it gives you all the tools you need to get the job done, from an intuitive interface to powerful processing, and that’s a dream in this industry.”

Arena will continue to refine its single master HDR workflow with each new production it takes on and collaborate with AJA’s development team as it does. “In this business you learn something new from every project, and failure to do so means you’re not doing your job. The FA Cup Final was a huge, complex undertaking from which we gained valuable takeaways that we can apply to future HDR productions,” added Rees. “FS-HDR is extremely valuable kit, our swiss army knife for HDR production.”

Arena is one of many live production companies making the move to a single master HDR workflow and we expect many to follow in the coming months, especially as consumer demand for live HDR content grows. As more do, AJA will continue its efforts to work with customers to improve its technology and extend what’s possible in the field. For more information about FS-HDR and other AJA HDR solutions, please visit: www.aja.com/solutions/hdr.