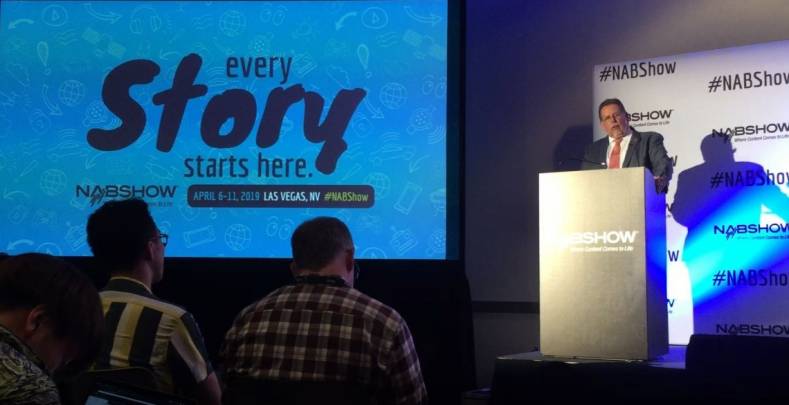 Sinclair’s Mark Aitken engaged the ATSC 3.0 Track audience with his perspective of the future of TV broadcasting.

Once tweaked to perfection and final format specs locked in, production models of Next Gen TV sets will flood stores, confuse viewers and provide broadcasters and sponsors new opportunities to expand their reach and brands.

Following a thorough report from Pearl TV and CBS about the Phoenix tests covered in ATSC 3.0 Field Tests Report Part 1, information about other OTA ATSC 3.0 tests in other locations was also shared that day and is reported in this Part 2. 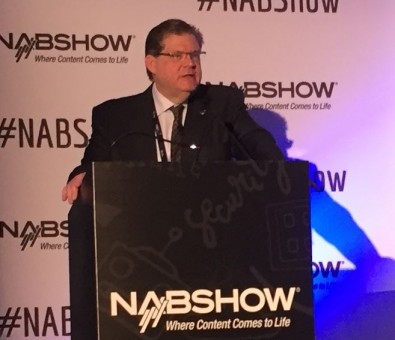 From October 2018 to March 2019 ATSC 3.0 testing moved to UHF Ch 31 and focused on the behavior of LDM at fixed sites. The Ch 31 signal is 437kW ERP with elliptical polarization only to the north. A non-directional H-Pol transmitting antenna is at 1055’ HAAT. A separate 25-bay slot & dipole antenna with 0.75° beam tilt is side-mounted.

Goals in the Cleveland field tests were the determine real-world ATSC 3.0 LDM performance with a single transmitter in urban, suburban and rural areas with a variety of terrains. The first tests evaluated the reliability of fixed outdoor LDM reception by measuring field strength (coverage), service (reception) and margin (overhead) with the directional outdoor antenna at 12’ and 30’ AGL. The tests also used a prototype commercial receiver.

One experiment evaluated proxy LDM Mod Cods that might represent scalable video coding (SVC). A speed of 3.0 Mbps was determined to be enough for the low-resolution portion of the core video, and 9.5 Mbps or better delivered the high-resolution enhanced portion of the video. 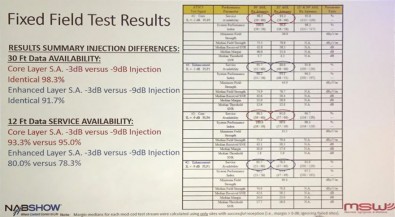 The experimental tests concluded that a “single stick” transmitting antenna provided coverage downtown and in urban, suburban and rural areas more than 95% of the time. It also provided reliable mobile service “crawling in downtown traffic and moving 50-70 MPH down the highway.”

The results suggest 50% E-Pol or more in all directions towards areas of interest, a moderate injection level of -4 to -7dB, and SFN deployment in RF shadows and other critical locations with signal issues. 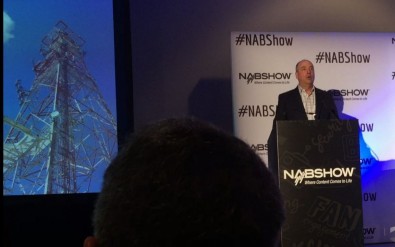 Pete Starke with American Tower shared what his company is learning in the Dallas tests.

At 11:20 a “Practical Model for ATSC 3.0 SFN Deployment – Lessons from Dallas Trial” was presented by Pete Starke, VP of Broadcast at American Tower and Robert Seidel of CBS.

American Tower teamed up with Spectrum Co to design and build commercial grade SFN systems for multiple high-power TV stations. Spectrum Co’s partners include Sinclair Broadcast Group and Nexstar. The final design and build project consists of four American Tower sites in the Dallas-Fort Worth market. The main transmitter location is in Cedar Hill with SFN ‘nodes’ in Ft. Worth, Denton and Garland.

SFN construction was completed in 2018. All transmitter sites connect to a hub-and-spoke configured network. The goal is to complete trial tests, and then convert to commercial operations. The objective is to unlock non-traditional broadcast services and new revenue streams. 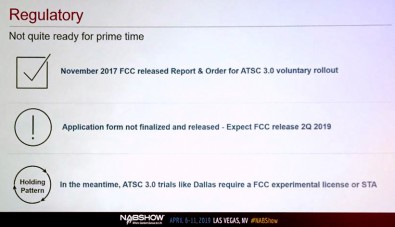 Choosing among network connectivity options can be complicated. It must be low latency with 99.999% availability. Connection choices include fiber, especially if already at or near the site, or line-of-sight microwave. The test group anticipates sharing trial results later this year.

DASH Service in the Cloud at Chicago 3.0

At 11:40, “Implementation and test results for ATSC 3.0 hybrid services at ‘Chicago 3.0’,” was presented by Jean Macher of Harmonic and Robert Seidel of CBS.

Macher discussed synchronization and latency of the two ATSC 3.0 paths, OTA and IP. He said this is accomplished by DASH using the MPD Table of Contents to retrieve and play the segmented stream. The MPD lists the A/V components for the channel, segments for each A/V component, Start time for each segment, the earliest availability for each segment and more. The client TV can retrieve segments from either delivery path, place them on the presentation timeline and switch between them when necessary. The DASH packager can adjust the ‘availability start time’ to cover for the latency of the longest delivery path.

He said implementation of ATSC 3.0 hybrid services based on OTA and cloud-based OTT processing was deployed in the Chicago tests. Tests used the Harmonic VOS360 SaaS to create a complete DASH service in the cloud, with the full set of representations delivered OTA and OTT. All A/V segments, plus the MPD describing the complete service are available on the VOS360 origin server. The DASH client in the ATSC 3.0 receiver can pull components of the service via the broadband path in the same way common OTT service is received.

The ROUTE/signaling server at the TV station also pulls from the origin server, but only the MPD and the components that are configured for OTA transmission. The DASH segments for the OTA representation are ROUTE-encapsulated and passed to the rest of the ATSC 3.0 transmission chain.

According to Macher, Harmonic’s ‘First Use Case’ is occasional UHD delivery. In this case the DASH client in the TV receiver sends requests for HD segments to be served from the broadcast OTA connection. It sends requests for the UHD segments to be served from the broadband connection. In this case, OTA-only receivers get good HD quality and hybrid receivers with a broadband connection get the best UHD quality.

The second use is time-shifting using the broadband connection. The third use is for accelerated channel changing. 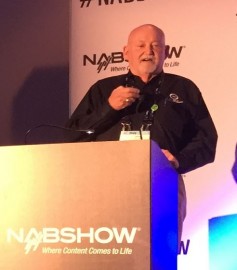 Wayne Pecena began his session with a quick review of ATSC 3.0 and standards organizations such as IEEE and the INTERNET Engineering Task Force (IETF). He then discussed network models and ATSC 3.0 multi-layer architecture, and he explained the components in a block diagram of an actual ATSC 3.0 station.

His discussion moved to ‘The Competencies of the Broadcast Engineer.’ Pecena said “The use of IP as a core transport platform creates the need for the broadcast engineer to have a high competency in networking technology to successfully design, build, and support the ATSC 3.0 infrastructure.” 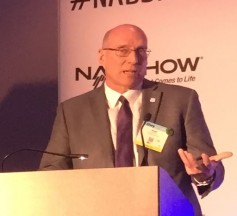 The ATSC 3.0 Interactive Content Standard is A/344, and it specifies how Broadcast Applications are distributed and defines how receivers should manage interactive content. It specifies the APIs in the receiver environment where the Broadcaster Application will execute. It is not a normative specification of an ATSC 3.0 receiver implementation.

He explained Companion Device Concepts A/338, which describes a standard protocol to allow a Next Gen TV to discover companion devices (CDs) such as smartphones and tablets, notify the CDs and allow them to communicate with the receiver. He went on to show a diagram and explain a detailed studio architecture example, and concluded by saying “TVs are not browsers,” “Program content is King,” and “ATSC 3.0 Receivers are still prototypes.”

Mark Aitken shared his overview of the 'Next Generation Broadcast Platform.'

SBG is committed to leading TV broadcasting into ATSC 3.0 and Next Gen TV with partners focused on mutual success.

Aitken began with what he called The 5 Guiding Principles of 'Next Gen':

After reviewing the opportunities ATSC 3.0 offers, he said "IP transport is beginning to place broadcast at the middle of a rebuild, an overbuild, of the internet itself." He continued, "The bits we deliver get multiplied by every individual that consumes them." The mathematics and concept is simple. "Our job is to provide that overlay to ensure that our industry can stand up alongside the rest of the wireless industries and provide the usefulness and utility that broadcasting provides for."

He discussed the Next Generation Broadcast Platform (NGBP). It is a “high-level view of a new broadcast system architecture representing a vision of a NGBP with six major high-level entities.” Those entities include Regional Data Centers, Remote Radio Heads (RRH), Broadcast Market Exchange (BMX), cloud with BSS, central private cloud with OSS, a Network Operations Center (NOC) and a BaaS Tenant Dash Board.

Aitken explained Sinclair’s NetworkCo and InfrastructureCo whose entities and participants are being developed, and provided details on the SpectrumCo Consortium with Sinclair and Nexstar. SpectrumCo marks a significant business commitment to lead the broadcast industry into ATSC 3.0 and Next Gen TV and build on its success. SBG and Nexstar represent 350 stations reaching more than 60% of the US market.

“The Brave New World of Application TV (Dynamic content replacement techniques and implementations for broadcast, Broadband and Beyond),” was presented by Jim DeChant, VP of Technology at News-Press & Gazette Broadcasting.

DeChant began the session outlining the dreams of ATSC 3.0, such as IP packets delivered over Wi-Fi without concern about multiple users requesting content simultaneously and with no data download charges or data caps. He said broadcasters intend to build and deploy ATSC 3.0 transmission systems in many of the top TV markets by 2020. He said HTML-5 based applications will decode and display text, photo, video and audio content almost anywhere, and emphasized the need for conformance.

DeChant then moved on to a technical discussion on defining clip order, interfacing with content decision engines and the use of media cashing to facilitate Dynamic Content Replacement in live and video on demand environments. 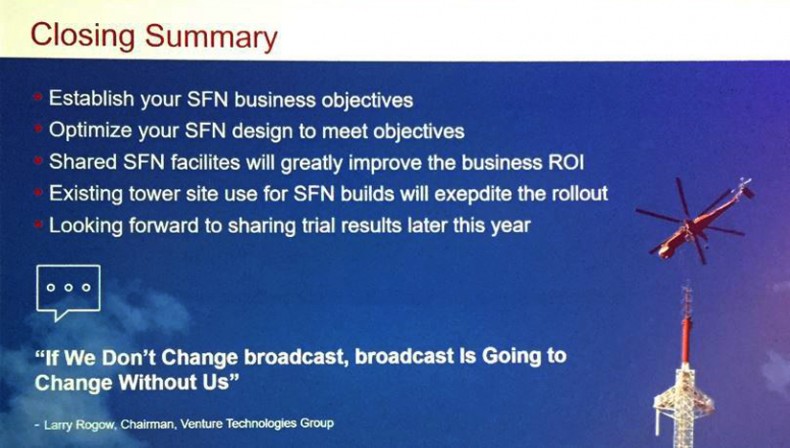 The Dallas Trial session concluded with this quote from Larry Rogow, Chairman of Venture Technologies Group. “If we don’t change broadcast, broadcast is going to change without us.”