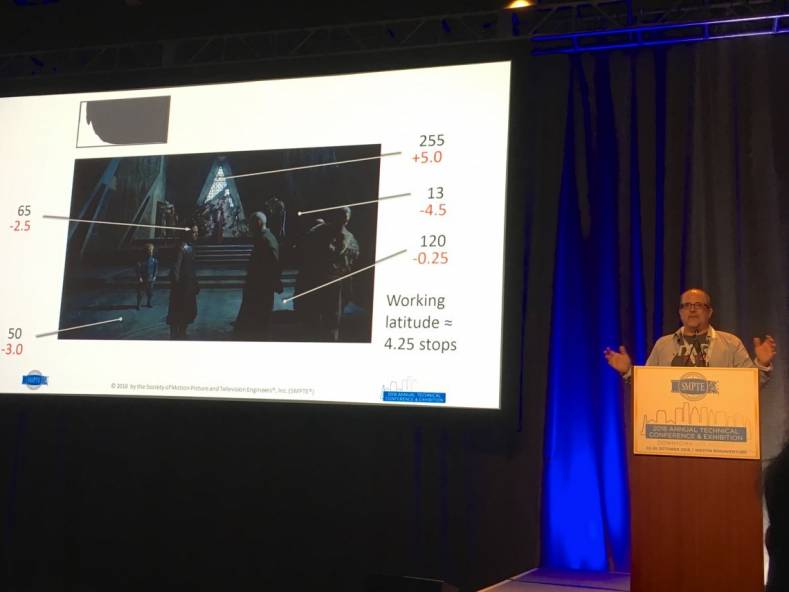 HDR has dazzled us for some time. But there are instances where SDR may actually tell the story better.

At Tuesday’s 10:30 AM session in the Sacramento Room during SMPTE 2018, former aerospace engineer and famed author, Pierre Hugues Routhier, Eng., M.Eng., challenged us to re-think our un-critical devotion to HDR, calling it the “high beam effect”-the peak brightness that can blind the viewer to important story lines hidden in the darkness.

He even said HDR is not the ideal imagery for all situations, and he had some data to prove it.

The session was officially called “What are the ‘killer apps’ for HDR?”, but Routhier’s presentation covered a wide field.

“For once, engineers have the chance to work with the creatives to have input on the experience they are desiring to create,” he began. “It has to do with the OOTF (Opto-Optical Transfer Function) which is the idea of minimizing the photons from what is in front of the camera to what is in front of our eyes. Surprisingly, that can be advantageous, or it can be detrimental to our experience. 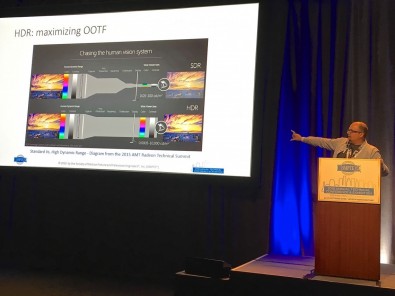 What the camera sees is not what the eye sees, said Routhier. Click to enlarge.

“I have come up with four attributes of what should be a high quality HDR image: Latitude, Richness, Resolution and Composition.”

We know about Latitude-brightness to dark, or the contrast range. But Routhier contends that is not enough for HDR. Richness adds to the distribution of pixels, but that is also not enough.

“The third one is Resolution, where we want to make sure the highlights are not clipped,” he said. “Histograms help us govern this.” 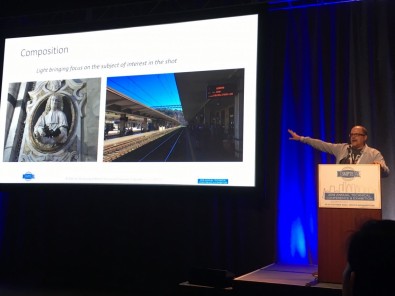 In one of these images, the sun is hitting the scene just right. Which to you think is better?

Finally, there is composition which this image illustrates.

“You can see that the way the sun hits the image on the left draws our eyes to it,” he said. “The light and shadows on the stone carving give us a nice composition for HDR. The one on the right has bright highlights and dark shadows, but if I put this on a home display at 1,000 nits, the eye is not drawn to the dark area where the train is coming from. So it is not very effective in HDR.”

His point is that an SDR image with lower dynamic range would show more pixels in the shadows, and draw the eye toward the director’s point of interest.

Routhier then used sports television production as another example of when HDR can fall short. “Shooting outdoors you have little control over the lighting because of sun and clouds,” he said. “But indoor sports like basketball are ideal to analyze for HDR. The playing field is very reflective, the playing field is not too large, so you get rich and dynamic compositions." 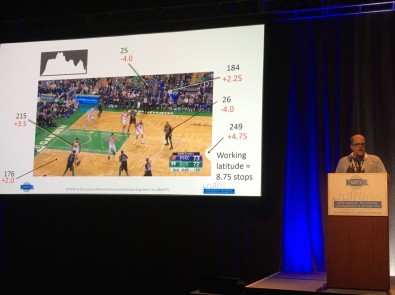 The basketball court is made for HDR. Click to enlarge.

"A contrary example would be soccer, played on a dull, grassy, very wide field that is hard to compose," he said. "When players go into a sun shadow, they can be hard to see in HDR. The production team might actually want to present it in SDR to see the players in the parts of the field that are eclipsed.”

Routhier then turned to motion pictures, calling cinema lighting close to the ideal. “But something that looks great in the theater may require some tone mapping when displayed at home in HDR,” he said, “because it will just look too bright.”

He used an image of Clint Eastwood from Sergio Leone’s “The Good, the Bad and the Ugly”, photographed by Tonino Delli Colli. 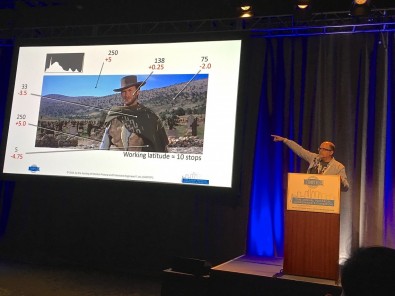 Delli Colli didn't even use the full 15 stops of his 35mm 2-perf Techniscope film to capture this famous image of Clint Eastwood from the film, "The Good, the Bad and the Ugly.” Click to enlarge.

“The Italians were masters of light,” Routhier said. “Notice how the light levels are distributed fairly even from Eastwood’s face rising up to the sky, that is near clipping at 5 stops above. There are highlights and shadows throughout, with just the sun hitting him from behind for separation. That has tremendous potential to satisfy the audience in HDR.”

Routhier finished by saying that “If we don’t have a good merge of the technical and the creative from the beginning, it will be difficult to make the most of the full potential of HDR.”