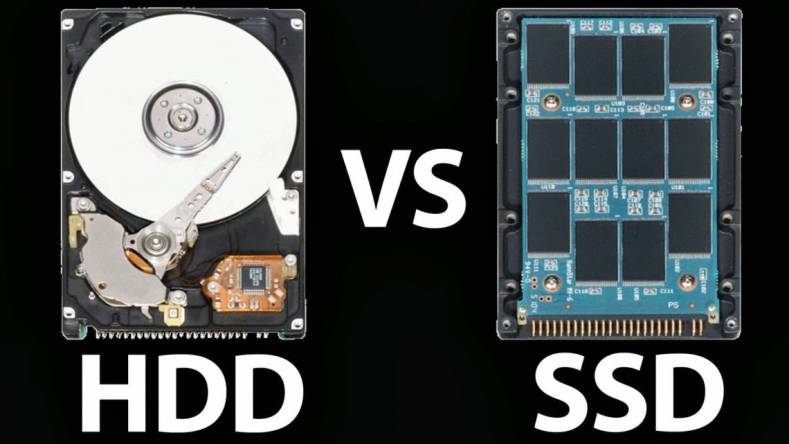 Today, the personal computing universe is mostly tied to a choice of hard disk versus solid state drives for data storage. But the differences of the two mediums may not be as clear as many now think.

Backblaze, one of the largest online backup cloud storage companies, uses both types of storage. Because they use so many different drives, their well-documented experiences have become one of the most trusted industry sources available.

Of course, the traditional spinning hard drive has been a standard for many generations of personal computers. Constantly improving technology has enabled hard drive makers to pack more storage capacity than ever, at a cost per gigabyte that still makes hard drives the best bang for the buck. 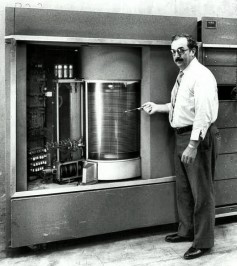 Hard drives have been around since 1956. The first ones were two feet across and could store only a few megabytes of information. Now you can store 10 terabytes into a drive about the same size as a kitchen sponge.

Information is written to and read from the drive by changing the magnetic fields on those spinning platters using an armature called a read-write head. The read-write head hovers slightly above the physical surface of the disk. 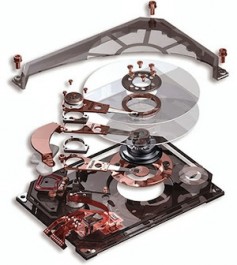 The two most common form factors for hard drives are 2.5-inch, usually for laptops, and 3.5-inch, common for desktop machines. The size is standardized, which makes for easier repair and replacement when things go wrong. The vast majority of drives in use today connect through a standard interface called Serial ATA (or SATA).

Proven technology that’s been in use for decades makes hard disk drives cheap. They are much cheaper, per gigabyte, than solid state drives. HDD storage can run as low as three cents per gigabyte. You don’t spend a lot but you get abundant space. HDD makers continue to improve storage capacity while keeping costs low, so HDDs remain the choice of anyone looking for a vast amount of storage without spending a lot of money.

Solid State Drives (SSDs) have become much more common in recent years. Solid state is industry shorthand for an integrated circuit, and that’s the key difference between an SSD and a HDD: there are no moving parts inside an SSD. 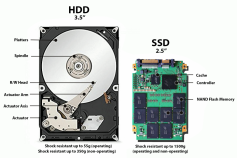 Rather than using disks, motors and read/write heads, SSDs use flash memory instead — that is, computer chips that retain their information even when the power is turned off. SSDs provide a huge performance advantage over hard drives — they’re faster to start up, faster to shut down and faster to transfer data.

SSDs can be made smaller and use less power than hard drives. They also don’t make noise, and can be more reliable because they’re not mechanical. As a result, computers designed to use SSDs can be smaller, thinner, lighter and last much longer on a single battery charge than computers that use hard drives.

Many SSD makers produce SSD mechanisms that are designed to be plug-and-play drop-in replacements for 2.5-inch and 3.5-inch hard disk drives because there are millions of existing computers (and many new computers still made with hard drives) that can benefit from the change. They’re equipped with the same SATA interface and power connector you might find on a hard drive.

But like hard drives, SSDs can wear out, though for different reasons. With hard drives, it’s often just the mechanical reality of a spinning motor that wears down over time. Although there are no moving parts inside an SSD, each memory bank has a finite life expectancy — a limit on the number of times it can be written to and read from before it stops working.

For practical purposes, most of us don’t need to worry about SSD longevity. An SSD you put in your computer today will likely outlast the computer. But it’s sobering to remember that even though SSDs are inherently more rugged than hard drives, they’re still prone to the same laws of entropy as everything else in the universe.

If you’re still using a computer with a SATA hard drive, you can see a huge performance increase by switching to an SSD. What’s more, the cost of SSDs has dropped dramatically over the course of the past couple of years, so it’s less expensive than ever to do this sort of upgrade.

Backblaze customers frequently ask whether and when the company plans to move its cloud backup and data storage to SSDs. The company’s data centers currently use 100,000 hard drives holding over 500 petabytes of data. While Backblaze does use SSDs for some applications, there are reasons why HDDs will continue to be the primary drives of choice for it and other cloud providers for the foreseeable future.

Today’s typical online price for a 2.5-inch 512GB SSD is $140 to $170. The typical online price for a 3.5-inch 512 GB HDD is $44 to $65. That’s a pretty significant difference in price, but since the SSD helps make the laptop lighter, enables it to be more resistant to the inevitable shocks and jolts it will experience in daily use, and adds of benefits of faster booting, faster waking from sleep, lower power use and faster launching of applications and handling of big files, the extra cost for the SSD in this case is worth it. 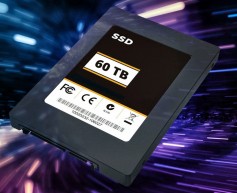 Some of these SSD advantages, chiefly speed, also will apply to a desktop computer, so desktops are increasingly outfitted with SSDs, particularly to hold the operating system, applications and data that is accessed frequently. Replacing a boot drive with an SSD has become a popular upgrade option to breathe new life into a computer.

Data centers, however, are an entirely different kettle of fish. The primary concerns for data center storage are reliability, storage density and cost. While SSDs are strong in the first two areas, it’s the third where they are not yet competitive.

Backblaze adopts higher density HDDs as they become available and is currently using both 10TB and 12TB drives (among other capacities) in its data centers. Higher density drives provide greater storage density per storage pod and vault and reduce our overhead cost through less required maintenance and lower total power requirements.

Comparable SSDs in those sizes would cost roughly $1,000 per terabyte, considerably higher than the corresponding HDD. Simply put, SSDs are not yet in the price range to make their use economical for the benefits they provide, which is the reason why we expect to be using HDDs as our primary storage media for the foreseeable future.