Back in 1972 — when the arcade video game, Pong, came on the scene — electronic gaming was born. Now millennials are drawn to eSports and NAB NY 2018 will show broadcasters ways to help capture that audience.

When the internet came of age in the 1990s, connectivity met gaming, which allowed gamers to compete with each other throughout the world. Scores and strategies could easily be compared and talented gamers emerged. Many became professionals and joined competitive teams. eSports was born.

Today, eSports has more than 250 million fans throughout the world. Newzoo, an eSports analyst, says U.S. media conglomerates such as Disney, Comcast and AT&T are already looking into content rights for eSports. The reason: these companies want to entice younger millennial consumers. Newzoo expects these companies to not only feature eSports on their linear media platforms (as seen with the Overwatch League on Disney XD) but also on non-linear live-streaming platforms, such as Disney’s upcoming streaming service.

eSports, predicts Newzoo, is on track to eventually become a bigger industry than traditional professional sports. The global games market will continue to generate higher revenues and eSports will be a major driver of this, with many brands investing in eSports to appeal to younger demographics.

This is why eSports appeals to not only traditional broadcasters (who see it as a good way to keep millennials at their TV sets for the years ahead), but digital streaming services. Estimates are eSports will be a $1.7 billion industry by 2021. 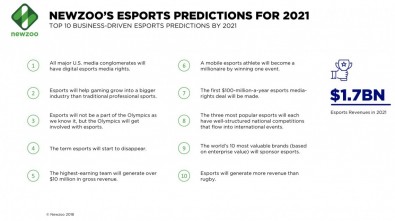 With eSports estimated to be a $1.7 billion industry by 2021, broadcasters are keen to tap that audience.

Cable channels like AMC and TBS are already getting involved. Turner’s ELeague, in which 24 eSorts teams competed against each other, was a major success. Another important elements in the esports future is virtual reality, at upcoming new role in broadcast technology in the 2020s.

Teams are at the center of the eSports industry, Newzoo reports, and are the main driver of fan engagement. Their attractiveness to sponsors — as well as the recent trend of increased revenue sharing between leagues and game publishers — will ultimately lead to increased revenue growth.

In the coming years, it is predicted that the team that generates the most revenue from sponsorships, media rights and merchandise will gross over $10 million. Other predictions are that by 2021, a mobile eSports athlete will become a millionaire by winning one event; the first $100-million-a-year eSports media-rights deal will be made; and the world’s 10 most valuable brands (based on enterprise value) will sponsor eSports.

In an educational conference program at the NAB Show in New York City, a session called "eSports: Get In On The Action" will be held this year. The six-part conference will focus on streaming, media rights, fan engagement tools and technology that are driving the forces shaping the future of the eSports global phenomenon.

Brands, game publishers, product developers, media companies, investors, leagues and technology providers will reveal the opportunities within this industry and how broadcasters can capitalize on them. It will be produced in partnership with the eSports Ad Bureau.

The sessions on eSports include: