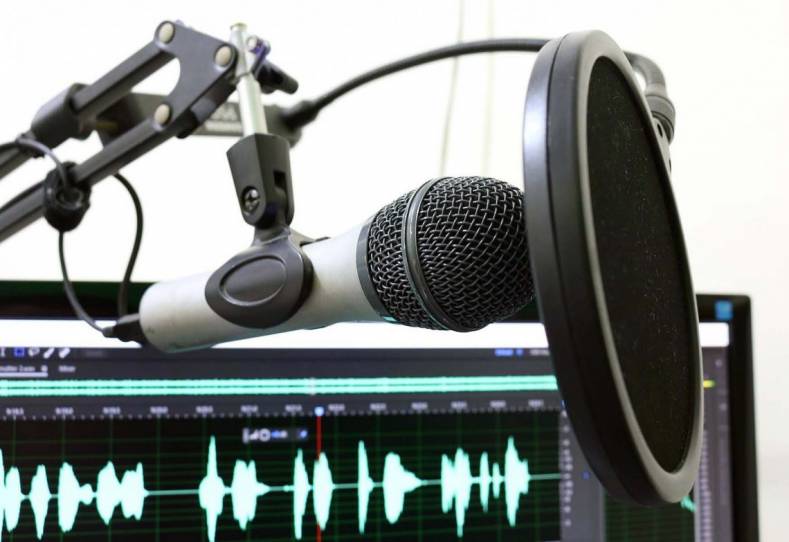 Since the beginning of broadcasting, announcers and narrators have spoken closely to microphones to boost the gravitas in their voices. They use proximity effect to sound richer, fuller and more intimate than they might naturally sound. But when they get too close, the result can be plosives. Here’s how to avoid them.

Most broadcasters speak from three to six inches in front of a microphone. As they get closer to the mic, low frequencies are magnified. This is especially true of ribbon microphones and accounts for their popularity in early broadcasting.

Not every voice, however, benefits from proximity effect. Some voices get too bassy and dull when working close to the mic. Some voices are best further away or by engaging bass roll-off switches. Each on-air personality needs to find their own sweet spot in front of a microphone. 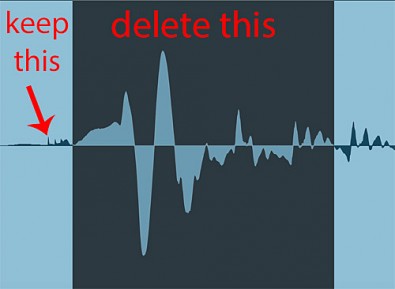 The biggest problem with working close to a microphone is plosives, a sound produced by stopping the airflow using the lips, teeth or palate, followed by a sudden release of air. The basic plosives in English are t, k and p (voiceless) and d, g and b (voiced). The most common source is the letter P, which is why plosives are sometimes referred to as P-Pops.

Though the P sound is the most common offender, the letter B can be almost as bad. S, TH and F sounds don’t create plosives, but they cause distortions due to air blowing across a mic’s head and into the diaphragm. If you listen carefully, you will often hear P-Pops in broadcasts and podcasts.

Wind sensitivity can effect cardioid mics, which are most commonly used by broadcasters. That’s the reason for a windscreen. But air coming from the mouth affects microphones the same as wind and it can sound just as bad. Omni microphones are less wind-sensitive than directional mics, and might solve plosive problems. But they can’t totally cure the problem. 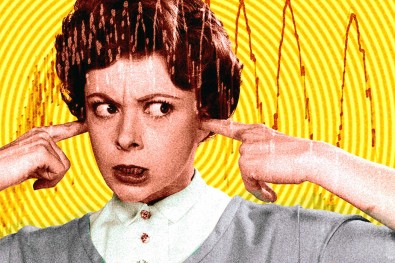 In a white-paper on plosives, Transom, an audio website designed for training public broadcasters, wrote that some mics, especially those designed for recording or reproducing the voice, have a special design intended to reduce plosives. The metal mesh on the front of the mic, known as the “head-basket” can be designed with multiple layers, or lined with foam, or have a special shape that serves to reduce the airflow that hits the microphone capsule, the part of the mic that translates sound waves to electrical signals.

But Transom said head-baskets are a trade-off. Too much protection from wind can also block high frequencies, making a mic sound dull.

In practice, Transom said head-basket configurations can only do so much. Many popular vocal mics have designs that reduce the severity of P-Pops and other breath noises, but none are fully resistant. The Electro-Voice RE-50, Transom said, is one of the most successful mics at avoiding plosive problems, but that is due to both the mic’s omni pattern and the head-basket design.

This characteristic is partly responsible for the mic’s popularity, it’s probably the most commonly-used interview microphone. But the very behavior that is an asset in the field makes it less attractive as an announce mic. It doesn’t have the same warm, immediate sound that a cardioid mic has, so it’s rarely used to record narration. And its omni pattern makes it unsuited to use with amplification.

Most directional mics designed for use on stage with amplification usually have a cardioid pick-up pattern, and head-baskets designed to reduce P-Pops. The classic example of this type of mic is the Shure SM-58, which has a recognizable ball-shaped head-basket, meant to reduce the effects of plosives and other breath sounds. That type of protection does reduce the severity of P-Pops, but does not eliminate them. 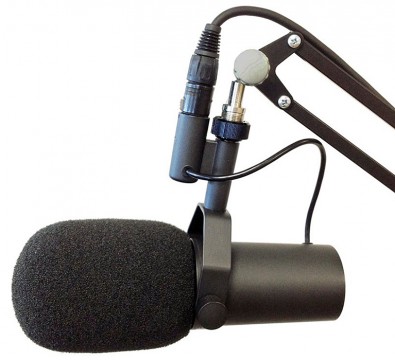 Some large-diaphragm dynamic mics, such as classic announcer mics like the

Electro-Voice RE-20 or Shure SM7B have mesh or foam wind screens built in, that serve to mitigate plosives. But Transom said it’s still quite easy to P-Pop those mics. Large-diaphragm condenser mics are very sensitive to wind and breath noises, and almost always require some kind of external pop protection.

Plosives can be avoided with good mic technique. The most effective way to avoid P-Pops is to position the mic “off-axis.” That means speak off to the side, at an angle, rather than directly in front of the microphone. Alternately, one can position the mic slightly above the mouth — pointing it down. That way, any blasts of air go past the front of the mic, not directly into it.

Users can still stay close to the mic, ideally three to six inches away, which will assure that the voice sounds impressive, with not too much room ambience.

The other, more challenging, aspect of technique involves controlling the air that’s used when articulating Ps and other problematic sounds. It takes some practice, but announcers can train themselves to expel less air when articulating troublesome sounds.

Transom suggests practicing by using a hand in front of the mouth. It’s totally possible to pronounce a P, B F and other sounds without blowing much air out at the same time. It’s also important to pay attention to breathing as a whole, not just when articulating words. It’s easy to cause a distracting rumble by simply exhaling into the microphone.

Transom said a surprising source of many problems is exhaling through the nose. Those breaths are often sent in surprising directions, and at a higher force than one might expect. That’s one of the reasons that it’s safest to position the mic off to the side of the mouth, or pointed down from above, rather than having the mic below the mouth pointing up.

It’s also recommended that mic users always have a windscreen. There are many different types, from simple foam covers, to multi-layer foam sleeves, to fabric or metal mesh screens. Transom said a basic foam windscreen can reduce the impact of most plosive noises, but if they’re too thin, they’re not very effective. If, however, they’re too thick, they can block high-frequencies, resulting in a muffled sound.

The most effective foam windscreens, Transom said, employ both open-cell and closed-cell foam to create an airspace buffer around the mic. The Shure A81WS is one of those covers that contains both types of foam, and is very good at blocking plosives without dulling the sound too severely. This windscreen is very large, overwhelming the mic itself. But it can block both wind and plosives more effectively than most foam covers.

More appropriate for studio use are fabric or metal mesh pop screens (small hoops with nylon stretched across them, or perforated metal discs) which are very good at blocking plosives while remaining acoustically transparent. Both diffuse air currents passing through them. Dual-layer fabric screens are especially effective. They must be positioned correctly, about an inch or two away from the mic, and strong blasts of air can still make it through the mesh. They only really work, however, when the mic is stationary and on a stand. They are not for use with hand-held mics.

Plosive distortion can be reduced by making the microphone less sensitive to low frequencies. Some mics have a bass roll-off switch, which won’t eliminate the problem, but can make it less severe. Similarly, using an equalizer to reduce the bass frequencies when recording can lessen the impact of P-Pops.

Sometimes, no matter what precautions that have been taken when recording, P-Pops end up in the audio. They can be seen on a digital editor’s waveform display as large volume spikes. They register as extremely loud on level meters. If these spikes are not fixed, they will throw off the overall mix levels, and be unpleasant to listen to, especially on speakers with good bass response. These volume peaks can also cause compressors or limiters to react severely, creating unnatural-sounding volume fluctuations.

Deleting part of the sound can sound jumpy, and can cause sync issues if you’re working with multitrack audio or synchronizing with video. A better approach is to use an equalizer. Highlight the problematic area — the large volume spike — and apply a high-pass filter, which reduces the low frequencies that are creating the thump and distortion. You may need to experiment with the frequency setting of the high pass filter. Ideally you want to only reduce as much low-frequency energy as is absolutely necessary.

The exact frequency where the P-Pop is reduced will vary. One hundred hertz is a good starting point, but you can try a lower frequency if the pop-removal sounds too thin, or a higher one if the processed pop still creates a bassy thump. This technique only removes the low frequency bump, there may be other distortion artifacts from the plosive blowing across the mic’s head-basket, but removing the low frequencies is usually a major improvement. 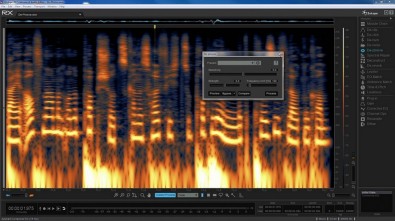 An efficient way to deal with plosives is to use processing specifically designed to fix the problem.iZotope Audio RX is a sophisticated tool for cleaning up many audio problems. In Audio RX 5 Advanced, they added a “de-plosive” module that can remove P-Pops and other momentary low-frequency noises.

The advanced version of the software is expensive, but if this kind of processing, along with other kinds of noise-reduction and audio repair, is something you need to do on a regular basis, it can quickly become worthwhile. The de-plosive processing is very quick and effective, acting only on the defined low-frequencies.

The best way to treat plosives is with a decent pop filter and positioning the microphone mic off-axis from the mouth. In most cases, this will fix the problem, but in pro audio, nothing in absolutely certain.