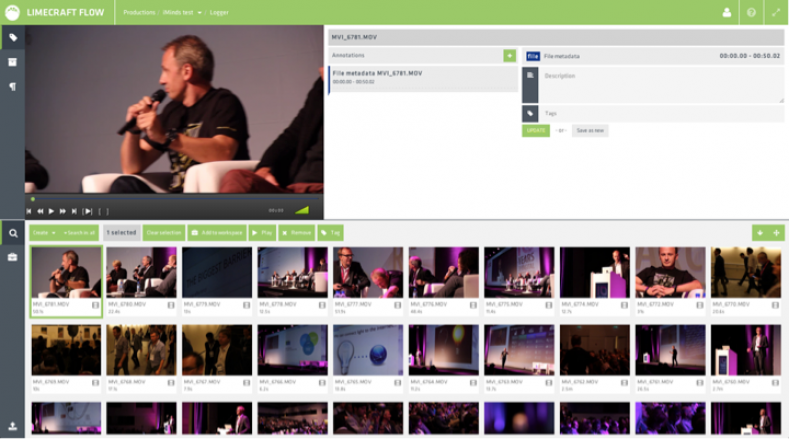 The Limecraft interface - "online tools for a modern production workflow"

In a modern production workflow, online tools enable different people to participate from different locations. Media files and production information, often separately stored and managed at different locations, need to be exchanged. Due to a lack of standards, producers rely on Facebook or exchanging documents via email. As a result, individual media fragments are hard to retrieve, reuse of content is expensive, and the overall production cost explodes as the number of distribution possibilities increases.

The key to solving this problem is an electronic script. It enables concurrency and systematic interaction between the story editing, shooting and various post-production operations downstream. Proper interaction reduces production cycle times and the overall production cost, it minimises the time to market, and enables the production crew to focus on maximum quality.

The industry is looking for a more top-down approach. The ability to communicate about a product before any material has been shot or edited, allows the producer to start marketing his product before any material is available. He could do so by considering the script as a playlist and orchestrating the different marketing channels including content delivery networks and social networks.

In a traditional workflow, a script is developed to a point where serves as the blueprint for principal photography and editing. It must be 95% accurate, which can take up to 12 months. Once in production, editorial modifications may have a considerable impact on the production planning or require expensive correction in post-production, and in the worst case the project results in a commercial failure.

A more advanced approach is where the story is developed more interactively and more agile. Storylines are developed taking into account the available material, which can be natural or synthetic images. By doing so, editorial modifications are detected in an earlier stage. The impact, if any, is considerably lower. Eventually, an early visual representation (by animation or using rough cuts) gives key staff an impression of the end result and enables them so they can act accordingly.

Proper management of shots and semi-finished edits and automated reproduction of the edit decisions results in parallel execution of production and post-production. Because the end result is visible earlier in the process, you avoid a number of iterations in editing and the overall production cycle time is reduced by 20% of more. From the point of view of the producer, a shorter cycle time boils down to a faster return on investment.

Maximise your return on investment

Bottom line, the return on investment (ROI) is your most important performance indicator. Profits are primarily determined by the revenue generated, minus the production cost.

To maximise the ROI, it is in the producer’s interest to maximise the commercial revenue while controlling production cost. The ROI benefits from a collaborative workflow in many ways.

Because they can be identified early in the process, the impact of obsolescent editorial decisions is restricted.

Because editorial information and precut material is available much earlier in the process, the producer starts marketing earlier, compared with a traditional process, thereby indirectly increasing sales potential.

Assuming that nonlinear distribution processes extend the collaborative production platform, and assuming that the producer is capable of handing over the script to the distributor, chances are considerably higher content is recognised in an ever growing library of available content, thus directly increasing sales.

Improve the quality of your product

Given that end users have unlimited access to an overwhelming library of internationally distributed content and the availability of specialised content targeting specific communities, producers find themselves in a fierce contest where “only the strongest survive.”

This means that production cost must be structurally reduced, production cycle times cut to a minimum, and ROI must, in general, be as high as possible.

The key to these objectives is a collaborative workflow, enabled by a smooth flow of editorial information, which, as a side effect, improves the quality of your creative product.

Maarten Verwaest is CEO and founder of Limecraft