360-degree video is hot. Global 360-degree camera sales are expected to grow at an impressive CAGR of more than 35% through 2020. When will 360-degree news production begin? It’s happening now say some experts.

NDTV, a Delhi India based 24-hour news channel is the first I know of that employs 360-degree video in its programming.

News Bulletin>>360-degree video is not VR.

To view 360-degree video a viewer doesn’t need to wear goggles, although in some cases, she can. It doesn’t require AR (Augmented Reality). However, AR can be applied to 360-degree imagery. Although 360-degree video need not be 3D, it can be. 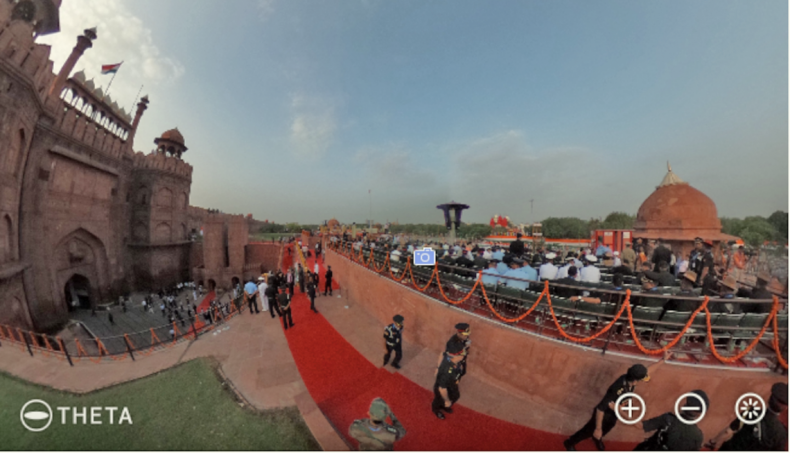 Viewing via goggles does, however, offer additional features. If a camera captures 3D, the viewer will see the scene with depth. Two, a viewer explores a scene by moving their head which feels natural. But, this concept crashes for viewers who sit on their couch when they try to look rearward.

A more expensive camera would have at least five sensors, one on each camera face and one on the top. To capture 3D, each camera sensor would have a pair-mate thereby providing an image for each eye. In Figure 2 you can see a pair of sensors in eight pods, with a single sensor on top. 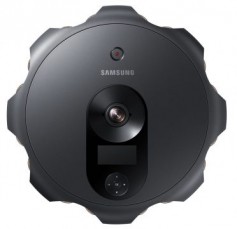 Figure 2: Samsung’s Round can Livestream 4K Video and Spatial Audio.

The more sensors the better. When there are only a small number of sensors, each lens must provide a super wide view. The result, an image with significant fish-eye distortion. A large number of sensors decreases optical distortion. Moreover, they provide more information to be “stitched” into a single image. As processing power continues to advance, stitching becomes better.

For 2D viewing, two options are possible with 3D video. Only one eye’s data are sent to both eyes. The alternative, shown by Figure 3, shows a “push-in” controlled by a browser’s plus/minus buttons. Figure 3: Pan to the right with a zoom-in from NDTV Independence Day Celebration Broadcast.

How can a viewer “look around” in a 360-degree newscast? They can’t. Like all TV, 360-degree video is a passive experience. During a 360-degree news spot there are two operational choices. An anchor who is comfortable with the technology may narrate what she sees, while dynamically panning, using a mouse or joystick, a video window throughout a 360-degree arc.

The more likely alternative will use an engineer in the control room controlling the view the audience sees. The newscaster can, as they do now, call out “Charlie can you show us what’s going on behind you.” Charlie, of course, will be in the control room not in the field.

A simpler alternative, a single view of a situation selected at the station—a situation that may not even be seen by the camera operator. All these options are possible because a 360-degree camera can be described as “overshooting.”

To experiment with 360-degree photos and video, I purchased an Insta360 Nano for my wife’s trip to Machu Pictou. The dual lens (two 180-degree hemispheres) camera has a mic and battery so it can be used by itself to take photos or record video. (Figure 4). 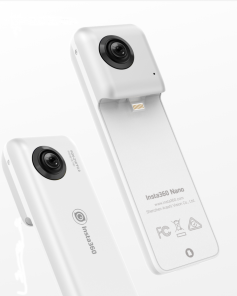 Figure 4: An Insta360 can be used as a self-contained Camera.

As shown by Figure 5, an Insta360 can connect to an iPhone via the camera’s Lighting plug. Before starting to shoot, you must first download the Insta360 app. 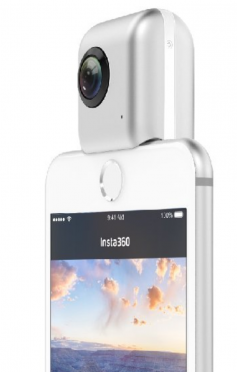 The camera’s iPhone app can generate several different “views.” Figure 6 shows one of these views. 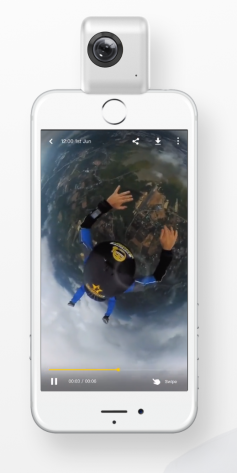 Figure 6: Here’s one type of view that can be created by the Insta360 app.

Photos and video can be stored on the phone, uploaded to a free internet site, or streamed live on several social media sites. (Figure 7).

If you haven’t viewed 360-degree photo or video in your browser, you will recognize them because they will have an icon looking something like that shown by Figure 8. It tells you to drag with your mouse in 2D space to see different views. 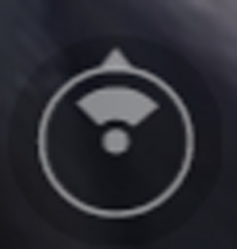 For a sample of the 360-degree experience, follow this link to a Korean roller-coaster video. Be sure to “look around” as you race over the track.

And, here’s a link to a ride in my home town. Notice how difficult it is for the shooter to give-up the notion that they need to pan the camera to present different views. Equally difficult—new viewers need to realize they, not the shooter, decide what they want to see. It took me a while to realize I was free to “look for” my condo.

Figures 9 through 14 shows how 360-degree photos and video can be used in different ways. Figure 9 shows the “view” a newscaster might choose to initially present. Figure 9: One View of Machu Picchu.

In Figure 10, the newscaster has chosen to pan 180-degrees to look “behind” the camera. But, of course, there is no behind. These concepts aren’t relevant in a 360-degree world. Every image has endless views within. And, all are available during a newscast. Imagine shooting video as one is walking. Suddenly a helicopter flies over. No need to scramble to pan your ENG camera toward the sky in an attempt to record its fly-over. A 360-degree camera is always capturing video of the view above and below. The control room engineer can always “get” what you didn’t. (Figure 11 shows an example of real “fake news” because an Apache helicopter is not flying over Machu Pictou.) Figure 11: The yellow circle, under the X, in the PIP shows the focus of this view.

Figures 12 and 13 shows two different pre-selected views. In this case, a news viewer will only see the view that has been selected. To work with stills and video I downloaded the free Insta360 Player and Insta360 Studio. Figure 14 shows a screenshot of the Insta360 Studio software. With Studio, you can create video clips that can then be edited using an NLE. The possibilities for using 360-degree video are as endless as the views possible from the images. A fast-breaking complex situation can be broadcast live using only a single camera. Immediate video can be sent to a social media site. And, the video—as well as specifically selected views—can be made available on a station’s website and/or on social media.

Steve Mullen has written a wide variety of ‘how-to’ videos, some of which are listed below.