So many choices. Which is best for professional video applications?

SD memory cards may all look the same, but as any experienced user knows there are now a myriad of different types of cards at a range of prices — all defined by complex terminology on each card. It has become essential for buyers to learn what all the jargon means. Here’s a guide.

First, all SD cards are defined by how much data they can hold. This is measured in gigabytes, such as 16, 64, 128 or more gigabytes. Many users purchase the highest capacity cards available, figuring they can never have too much memory.

But more experienced videographers prefer to purchase several lower-capacity cards. Why? Safety in numbers. With a single high-capacity card, the user gambles on the reliability of a single card. That card can also be easily damaged, lost or even seized by a particularly nasty security guard. You never know what can happen on location.

Without labels, all SD cards look the same. That is one good reason to purchase them from a reputable seller. Internet-sourced cards may be defective or not of the listed storage capacity.

Lower capacity cards are cheaper to purchase as well. A video shoot using four 32GB cards is safer than one relying on a single 128GB card. Unless you can’t stop rolling video to change the card, go for smaller capacities.

Next comes the choice of SD, SDHC or SDXC cards. These terms designate the filesystem being used to store the data. Basic SD cards store up to 2GB using FAT 12 and FAT 16 systems. SDHC cards, for “high capacity,” store between 2GB and 32GB using the FAT32 filesystem. Finally, SDXC cards, for “extended capacity,” hold from 32GB up to 2TB using the exFAT file format. Be sure the camera supports the format chosen. 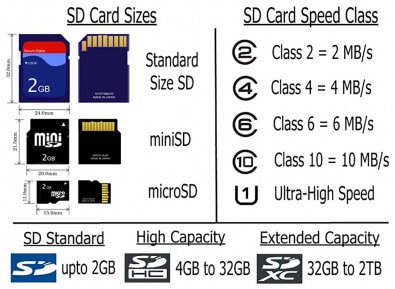 The next gaggle of jargon comes with the speed of the card. This is how quickly the card can read and write data. This is especially important if you’re capturing video.

Getting good, reliable information here can be tricky. Some vendors cite actual speed — say, 95 MBps (95 megabytes per second). Others use marketing lingo, like 1000x, without revealing the actual number. It is important to determine the actual speed, which is the maximum theoretical throughput for reading data from the card. It can be less important than the speed at which data is written to the card.

Next, there is the UHS bus speed, or “ultra-high speed.” This is indicated by the Roman numeral I, II or III on the card’s face and refers to how data is transferred between the card’s pins and the host device’s connector.

UHS I uses just a single row of pins on the back of the card to transfer data up to a theoretical maximum of 104 MBps. UHS II includes a second row of pins to deliver up to 312 MBps in half duplex mode. UHS II can also operate in full duplex mode, which shuttles data in both directions (simultaneously writing and reading to the card) at 156 MBps. 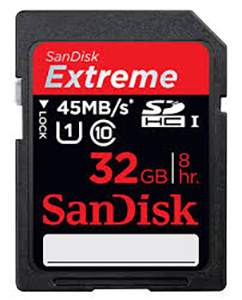 UHS III also uses two rows of pins, delivering theoretical read throughput of up to either 312 MBps or 624 MBps, both in full duplex mode. As with the capacity type, make sure the camera supports UHS II or UHS III before purchasing one of these cards.

Next, there’s speed class. In an article in MacWorld, it notes the number inside a partial circle that resembles a C. This indicates the minimum speed, in megabytes per second, that data is written to the card. Ten is for 10 MBps, 6 for 6 MBps, 4 for 4 MBps and 2 for 2 MBps. Faster SDXC cards get the UHS (ultra-high speed) rating, which is a 1 (10 MBps) or a 3 (30 MBps) inside a U-shaped logo. Although related, the UHS speed class is not the same as the UHS bus speed.

For videographers, though, focus on the video speed class. Look for a “V” icon and associated number that indicates the transfer rate. Standard definition video will record without dropping frames to V6 (6 MBps) and V10 (10 MBps) cards. A V30 (30 MBps) card can handle HD video. For 4K video, look for a V60 (60 MBps) card, while 8K video capture performs best on a V90 (90 MBps) card. Video speed class ratings appear only on SDXC cards.

For a product that started out so simple, the little SD card certainly has gained complexity. And now, of course, we have miniSD cards, which start the cycle all over again. 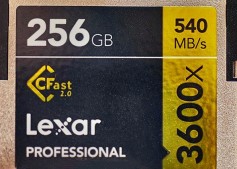 Also, it’s always best to buy known brands and to make sure you are getting the real thing — rather than counterfeit memory cards — which can appear identical to the genuine article. Because counterfeit brands are so hard to detect, I always purchase from reputable dealers rather than buy for lower prices of eBay. A flawed SD card can easily ruin your entire production and it’s not worth it to save a few dollars.

Finally, be aware there’s a shakeout going on in the SD card industry. Micron, the manufacturer of Lexar professional SD cards, recently said they will exit the storage business after 20 years. This will leave Sandisk, Transcend, Kingston and others are the major brands. Be familiar with the vendors you support.