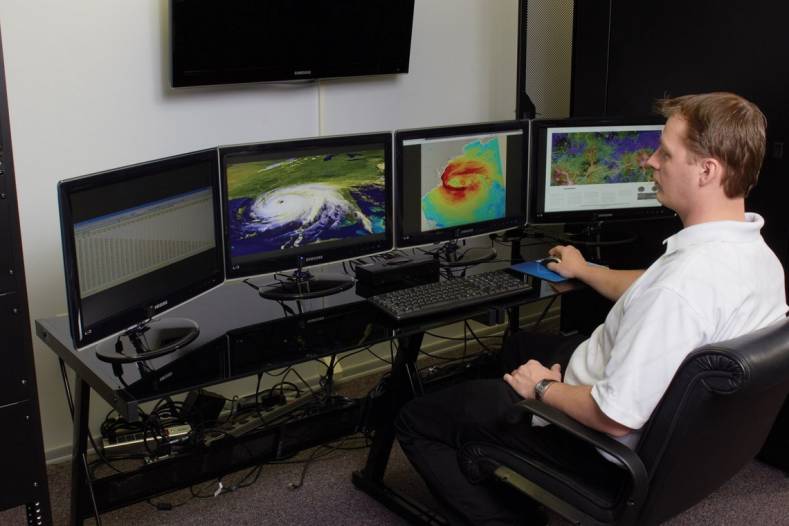 Multiple computers can be accessed at the same time using KVM's

IT departments are constantly fighting a balance between ease of use and imposing draconian security. Recent hacks into big production companies have highlighted IT security problems, and they now insist on in-depth technology and security audits before a broadcaster can receive such material.

Desktop computers are an IT engineer’s biggest nightmare for security. Files can be easily copied and it’s difficult to maintain audit trails. Systems increase in complexity as Intrusion Prevention Systems (IPS) and Intrusion Detection Systems (IDS) are added to networks in a vain attempt to detect copying. The fundamental issue is the amount of logging data and false positives they create. It’s a full-time job just to analyze the log files.

Virtualization builds on centralization and goes someway to help with security issues as the main processing power is moved away from the operator, and IT use tools to centrally administer security policies onto data directly within the virtual machine. However, there is still a significant amount of processing power on the desktop computer and anybody who is determined will find a way to copy files. Complexity breeds vulnerability.

Modern broadcasters have legacy systems running on old servers and computers, DOS and UNIX servers are not uncommon but lack the ability to be effectively centralized due to the distance keyboard video and mouse connections need to be run. Even with signal repeaters they may only extend a few hundred yards, no distance at all when we consider running cables up and down risers between floors.

KVM’s are an emerging weapon in the broadcast engineer’s toolbox. They enable connection to centralized and virtualized systems, both modern operating systems and legacy schemes such as UNIX and DOS, and significantly improve security.

IP Networks are used by KVM’s to extend the keyboard, video and mouse operations of a server. Paired systems consist of a transmitter at the server in the datacenter, and a receiver on the user’s desk. Remote Desktop Protocol (RDP) systems provide connection directly to Windows and Linux servers from the same receiver. Using this combined architecture, a user operates legacy and new systems seamlessly together from one operational desk.

KVM desktop receivers have limited connectivity, usually just DVI or HDMI for monitors, headphone connections for audio communications, and a USB for keyboard and mouse. The big difference between the KVM receiver and a desktop computer is IT engineers centrally manage the functionality of the connectors. They can limit the USB ports to keyboard and mouse operations to stop any unscrupulous user connecting USB disk drives.

Using KVM’s gives IT an added level of security and demonstrates to block buster film distributors their ability to stop files being copied, or viruses being injected into the network.

Outside broadcasts, studio’s and transmission facilities all benefit from KVM’s, and in this essential guide we take a deeper look at how KVM’s work and their applications in broadcast television, especially as we move to virtualized and centralized infrastructures.