Until recently, the most cost effective option for videographers backing up video files in the field was a portable hard drive. Hard drives have a large capacity, are small in size and very inexpensive. But now, hard drives are being challenged by much faster and lower cost outboard SSD drives.

There have also been options from the beginning to build your own. Using a 2.5 inch plastic shell, such as a USB 3.0 version made by Anker ($12.99), bare SSD drives can be turned into outboard drives. These drives, however, tend to be slower in read/write speeds.

As SSD drives have dramatically fallen in cost, the main reason for videographers to use them is their increased speed over conventional hard drives. SSDs are dramatically faster — at least four times faster. A one terabyte SSD drive can be purchased for under $240 and even less with numerous holiday sales driving the cost down. 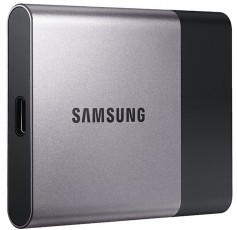 Samsung’s T3 series of portable SSD drives (from $99.99 to $799.99 depending on the 250GB to 2TB capacity) are among the most popular drives on the market. They are the size of a business card, weigh less than two ounces, are shock resistant and have read-write speeds of up to 450 MB/s.

These drives use Samsung’s 3D vertical NAND (V-NAND) technology that increases density, performance and efficiency in a smaller footprint. The drives have a USB-C plug, but ship with a USB-C to USB-A cable so users can plug into the existing USB ports on any Mac or PC. 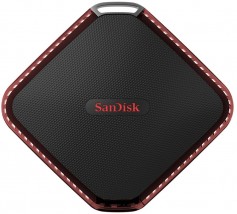 Another popular SSD drive is the SanDisk Extreme 510, a ruggedized drive with an IP55 rating for water and dust protection. This makes the Sandisk attractive to videographers who work in challenging conditions in the wild.

The SanDisk drive offers a transfer rate of up to 430MB/s read and 400MB/s write speeds. This drive is designed for all-terrain use and includes an integrated water-resistant cap that fits over the USB port and a rubber bumper around the edges to protect against drops in the field. It can be attached to a lanyard via the clip on the drive.

The square-sized SanDisk drives weighs only 4.8 ounces and comes with its own encryption software. The 480GB version, the only size currently available, is priced at $199.99. 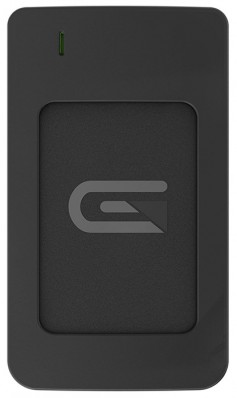 A faster and more expensive option are Glyph’s Atom and Atom RAID SSD drives. The one terabyte Atom RAID, for example, comes in a one-piece rugged aluminum enclosure and has a data speed of 770 MB/s. It features a shock resistant design with a removable slip cover.

The Atom RAID has two SSD drives in a Raid 0 configuration allowing for the high speed of transfer. It’s about 50 percent wider than the standard Atom and a bit heavier, but otherwise similar in design. The Atom Raid is compatible with Thunderbolt 3 and USB 3.0 ports on any computer.

The Glyph drives are among the fastest and most rugged made and are excellent for video crews that can afford them. The basic drive begins at $129 for 275GB and tops at 1TB for $399. The RAID version begins at 1TB for $419 and 2TB for $819. At the higher prices, you are paying for the best construction available and the higher transfer speed. 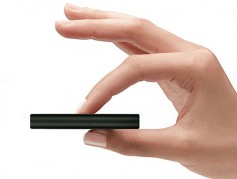 Any of the all-in-one SSD drives work well for video applications. Units that use internal 2.5 drives with external cases tend to have slower read/write speeds, depending on the case used. This probably is because the SSD drive is not matched for optimal performance to the dozens of inexpensive cases now on the market.

The cost of all SSD drives has recently fallen dramatically and now offers a new and formidable challenge to hard drives. For users who priced the difference in drives a year ago, should do it again. The speed difference is dramatic and it may have become cost effective to make the switch from HD to SSD for field backup.