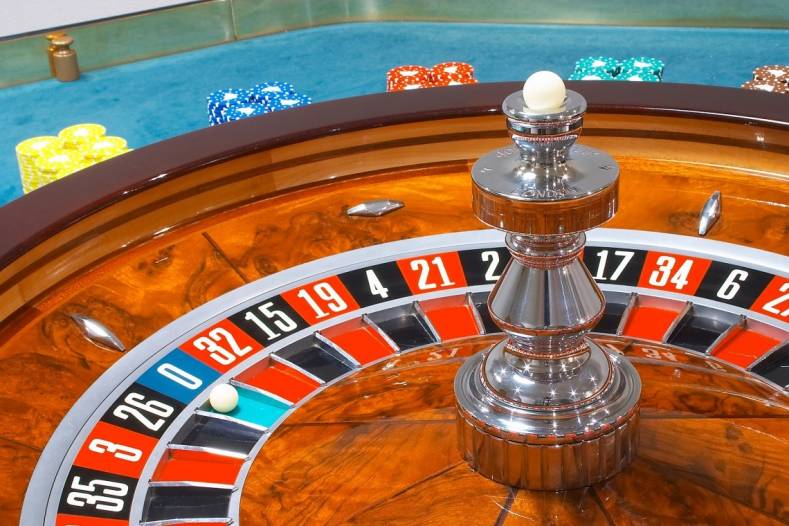 The future of TV RF broadcasting is as unknown as the next winning number on a casino Roulette wheel, except it has nothing to do with luck.

ATSC 3.0 and the FCC repack are big bets on the future of over-the-air TV. Are there ways for TV stations to improve their odds of winning the jackpot?

When the first FCC broadcast spectrum auction trial balloon was launched in the early 1990s, the US national debt was about $3 trillion. Many politicians who pushed for spectrum auction at that time touted it as the strategy to pay off the national debt. The wireless industry was barely in its infancy, the market wasn't there and it fizzled.

In 2015, the national debt was $18 trillion. The 2016 national debt will exceed $20 trillion. Right now, it appears the FCC could auction off the entire spectrum from DC to light on every square inch of US soil and not raise that kind of money.

The real-world value of TV spectrum is beginning to reveal itself, and it’s not quite growing into the overflowing piles of corporate cash as promised by politicians and pundits. Judging by last week’s Phase 2 of the FCC’s Reverse Auction proceedings, some unplanned bidding rounds appear likely in the future.

The trend seems to indicate there's not much ROI in providing more wireless bandwidth for cows, crops and vacant land across what some people call fly-over country. TV stations in small markets have learned how to make a profit in their unique fly-over country local markets. Their business model is mass communications, primarily funded by local sponsors wanting to actively communicate with the local masses. It's all about building mutually beneficial local relationships. Unicasting to a limited number of paid wireless subscribers doesn't fit the working model. 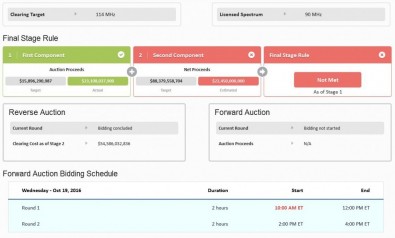 The FCC posted its Incentive Auction Dashboard – Stage 2, a score card of sorts showing target, actual and estimated proceeds. It also shows the Clearing Cost as of Stage 2 to be $54.5 billion. The Clearing Cost is what it will cost the FCC to reimburse broadcasters to replace RF hardware necessary to move to new channels. Clearing Costs don’t exactly pay for everything, and we’ll discuss that in a moment.

The 31 August 2016 Public Notice from the FCC set the stage for the recently completed Phase 2 of the reverse auction. It states “The clearing target for any subsequent stage of the auction generally will be the next lowest clearing target in the 600 MHz Band Plan.” The Public Notice goes on to explain “Each lower clearing target adds one or more channels back to the TV band, resulting in additional space to accommodate feasible channel assignments for stations.”

As of now, with the Second Component completed, estimated proceeds are near $22.5 billion. The target was $88.4 billion. The Clearing Cost as of Stage 2 is $54.5 billion. You don’t need a MBA to see that this isn’t quite adding up as anticipated.

Round 1 of Forward Auction Bidding begins at 10 am ET on 19 October 2016. With the clearing target spectrum reduced from 126 MHz of to 114 MHz, the total asking price was lowered from $88.4 billion to approximately $54 billion. The first phase of the Forward Auction only reached $23 billion for 100 MHz when bidding ended.

Analysts are predicting the FCC will have to move to a third auction stage, which would reduce total licensed spectrum available to 80 megahertz, or even to a fourth stage with just 70 megahertz of spectrum made available for commercial use before there is alignment on what broadcasters want to be compensated for their channel and what telecom operators are willing to pay for it. As the auction moves forward, stations at the end of the 600 MHz band and many are in smaller than single digit markets are most likely to be removed from the auction as spectrum is reduced.

The current FCC record for net proceeds for a commercial spectrum auction is $43.3 billion generated by the 2015 AWS-3 auction, which sold 65 MHz in the 1.7 to 2.1 GHz band including a 15 MHz set-aside for unlicensed use. Clearly, today we’re in uncharted territory. The latest Public Notice from the FCC is “Guidance Regarding the prohibition of certain communication during the incentive Auction, Auction 1000.” It confirms this article is spot on.

Interestingly, in the same timeframe as the Spectrum Auction and repack, the ATSC 3.0 bandwagon appears to be on the roll. Just recently, ATSC published an 81-page ATSC 3.0 Transition and Deployment Guide, Version 1.1. It is available here for free download and promoted as “A living guide developed by broadcasters and manufacturers to assist in the planning of spectrum repack to support ATSC 3.0 implementation.” 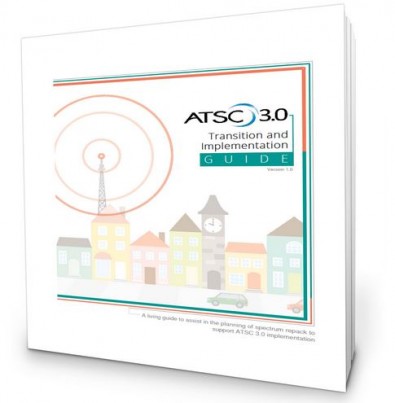 ATSC 3.0 Transition and Deployment Guide, Version 1.1 is available from many of the companies listed above.

In it are highly detailed descriptions of the digital elements and standards in and within ATSC 3.0. In addition to ATSC 3.0’s myriad technical details and transmission format standards, information of interest to RF and transmitter engineers begins on page 43 of the Guide, starting with “Trade-offs between services, robustness and bandwidth.”

The 36 pages that follow cover topics that will only make sense to transmitter and RF engineers. They include discussions about the exciter, transmitter, filters, combiners and transmission line, and antennas. It discusses in detail polarization advantages and disadvantages, and future deployment of single frequency networks (SFNs). It continues with thorough sets of instructions for engineers, including an investigation checklist for preparing a tower and tower site.

The entire document is well written and carefully explained by industry experts. Few people at a TV station will understand more than perhaps the Executive Summary and maybe the first paragraph of a few of its many topics. That’s why it is important you understand it.

Engineers are in an interesting position because they are among the few in the business with a complete view of the big picture and the details that make it work. Most other TV station people are more interested in creating something new, promoting it, selling it and making it succeed. Everyone benefits from technical changes that make money and promote the brand, such as the internet. ATSC 3.0 could be the next big thing.

The ATSC 3.0 bottom line for engineering departments is two-fold. From the STL to the antenna elements, upgrading to ATSC 3.0 requires approximately 2dB more peak power than ATSC 1.0. The cost of an additional 2dB can ripple through a transmission facility from the transmitter power mains to the antenna legs. Everyone's infrastructure is different.

Stations changing channels as a result of repack will receive a unique benefit multiplied by existing headroom. Rules for the FCC’s repack reimbursement program cover like-for-like expenses, meaning replacement hardware at ATSC 1.0 power levels. Extra dBs are on the station. Stations that included generous headroom in their current system design might save time, trouble and money. Others might agree maintaining that headroom in ATSC 3.0 would continue to be a worthwhile investment.

The ATSC and manufacturers contributing to the Guide’s contents conclude that “Because broadcasters can build future proofing into their potential channel changes, 3.0 infrastructure will begin soon.” This is true except for one small problem. We need a realistic plan for the over-the-air transmission transition.

You don’t have to be a broadcaster for long to realize some conversion/upgrade plans work better than others. Until now, every plan from NTSC color TV and stereo was backwards-compatible with the oldest B&W mono TV. The same can be said for AM stereo, FM stereo and HD radio. The consumer DTV transition was aided with government-subsidized DTV to NTSC converter boxes and second channels for the transition. Those were the good old days. There’s no such stepping-stone plan for ATSC 3.0, which is incompatible with virtually everything else. 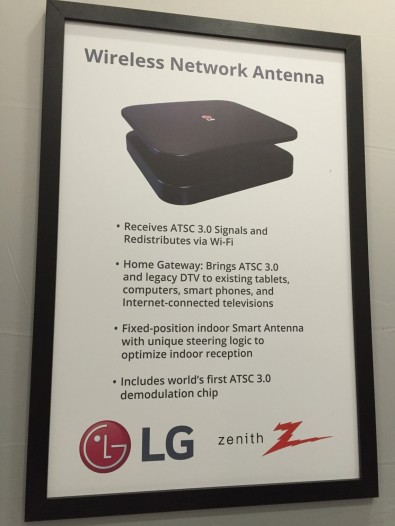 The “last 100 feet” of ATSC 3.0 is elegantly covered by the “Home Gateway” shown in Figure 1. Such a device resolves the home display and signal distribution issues, but there are no second channel plans to keep TV station content available to all viewers in both formats as they gradually upgrade their TV receivers.

How will the station and consumer market transition between two incompatible transmission formats? The only plan receiving any discussion is the “Lighthouse Station” plan. It depends on network stations in each market cooperating with each other while shuttling their channels to other channels. Engineers at competitive stations sometimes cooperate when an emergency situation arises, such as loaning a competitor a rare spare part on a weekend.

In my experience, cooperation between competing TV stations at any level other than chief engineers and pool reporters is rare. At the business level, we’re all after a slice of our competitor’s pie.

If all stations were only broadcasting one major network channel like analog times, the plan might work. Today, the increased revenue with second, third or more channels is woven into a station’s budget. It’s what many broadcasters found to pay for DTV and HDTV. Nobody pays for new technology with higher ad rates. That model never flies.

It will be interesting to see how in-market competitive stalemates work themselves out. It will be unique in each market, and surely there will be a few markets where everyone won’t cooperate. Is there a better idea? The industry could use one right now. If you have a better idea, please speak up.