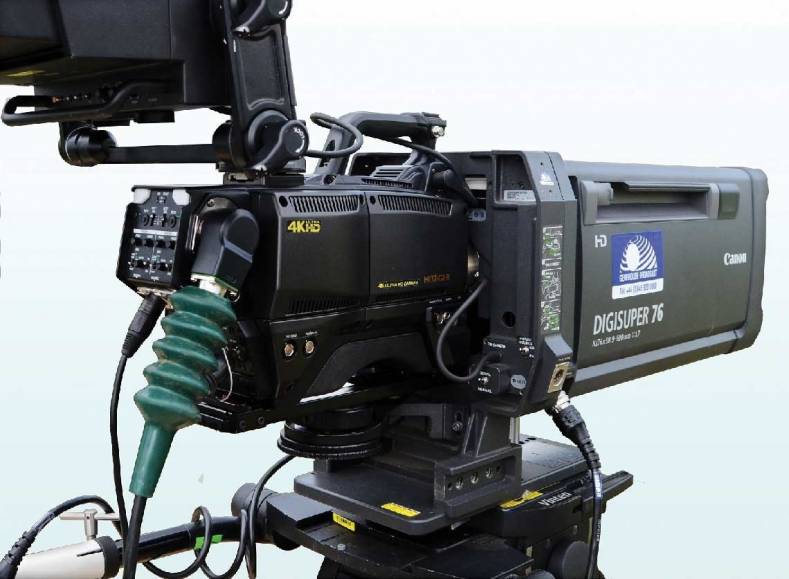 Grass Valley and Hitachi both showed 4K cameras for the UHD production market at IBC 2014. Cameras with 2/3 in sensors are thought to deliver the ideal depth of field and sensitivity for general studio and sports production. Although the super 35 format is good for cinematography, accurate focusing can be challenging. Not only that but broadcasters and rental houses have a huge investment in B4 lenses. Both vendors were showing cameras for this market. To get around the sensitivity issue with a 2/3-in 4K sensor, both vendors propose to use HD resolution sensors with pixel offsets to derive the 4K image.

Although 4K cameras were used at the World Cup, there wasn't the selection of zooms that broadcasters are used to in the 2/3in format. The 100:1 zooms that sportscasters favour would probably be too large and expensive to be practical propositions for super 35mm sensors. so for many reasons the devopment of 2/3in 4K cameras is vital for the advance of UHDTV teleproduction.

AT IBC 2014 I saw two vendors who are previewing such camera systems.

Grass Valley was previewing a 4K/UHD camera with a B4 lens mount based on LDX technology. which they claim is the the world's first in this format (I guess they didn't know Hitachi will be shipping soon).

A 4K 2/3 in sensor would have cells less than one-quarter the size of HD, so the sensitivity would suffer. It was explained to me that instead Grass Valley proposes a conventional beam-splitter with HD resolution sensors. Pixel offsets will be used to derive a 3840 x 2160 output. Little detail is available as yet, I guess NAB 2015 will see more information, a ship date even?

Over to the Hitachi stand where they showed the SK-UHD4000 system. This UHD production camera system uses newly developed 2/3-inch CMOS sensors and a B4 mount. Hitachi has adopted a four-way beam splitter, with red and blue as normal, but two green sensors in an offset configuration. The camera can produce video images with high sensitivity and high resolution. The specification is tentative right now, but Hitachi have published a sensitivity of f8 and S/N of 59dB for UHD images. It can output HD and 4K video signals separately, which means that it can be used in the current HD environment and capture archive material in 4K and be ready to transition to 4K as soon as demand arises.

Hitachi has already announced a sale of 50 cameras to Gearhouse Broadcast, who expects to take delivery of the first batch of the SK-UHD4000 by December 2014. The first usage will be at the 2015 AFC Asian Cup international football tournament which takes place in Australia in January 2015. Gearhouse will use the new cameras in its new 4K OB truck which is currently being built for its Australian business, as well as a new 4K truck planned for the US. The rest will be used across its UK-based specialist systems integration, projects and rental divisions.

I guess it’s all down to the matrixing and interpolation algorithms.

By 2015 it looks like general 4K production will have proper camera systems rather than deploying digital cinema cameras, which aren’t really designed for conventional television. It remains to be seen whether the old HD lenses stock is good enough for 4K, but that is more a commercial issue than technical, as broadcasters look to amortize their investments.