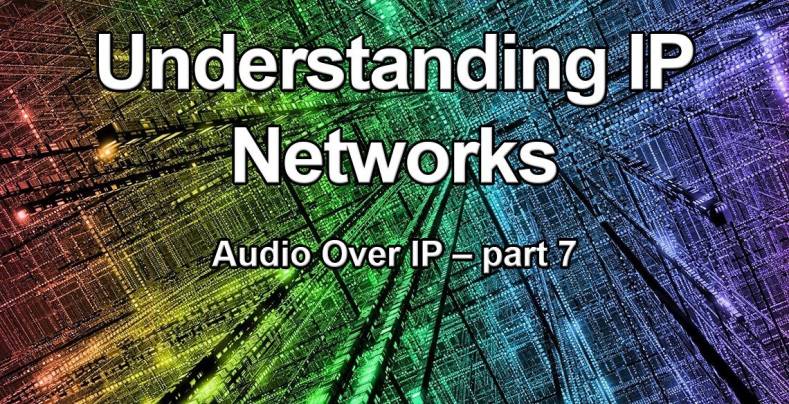 In the last article we looked at how host devices such as cameras, sound desks, PC’s and vision mixers connect to routers. In this article we continue the theme of looking at a network from a broadcast engineers’ point of view so they can better communicate with the IT department, and look at how audio is routed over a network.

In television, audio is notoriously difficult to get right. The human audio visual system can cope much better with disturbances in pictures than sound. If television picture flashes or bangs for a few seconds, then we don’t seem too concerned with it. If the audio in the same television transmission breaks up, stutters or distorts, then we are aware of the problems much more quickly, and we become easily frustrated or stressed if the problem continues.

As we move to the IP world we have to look at ways we can deliver audio over networks without delay, or breakup and distortion. IP networks were originally designed to transport non real time data such as web browser traffic. One of the benefits of point to point connections is that we can guarantee the audio will reach its destination within a predictable timeframe and without errors. We now have to apply this philosophy to computer networks.

The Audio Engineering Society (AES) has provided two point to point standards that have been used extensively in the broadcast industry; AES3 and AES10. AES3 provides pulse code modulated (PCM) audio samples in real time over a point to point connection. MADI was adopted by the AES and became formally AES10, this builds on AES3 to provide up to 56 channels of audio.

Comparison of AVB and AES67/Dante systems

Point to point connections work well within studios and have stood the test of time. The problems start to occur when we move outside of the studio to distribute audio to the wider TV station and sending to other facilities, such as OB units, as this form of connectivity becomes very inefficient.

A 100Mbit/s MADI connection needs a 125Mbit/s baud rate connection even if you only send one channel consisting of 2Mbit/sec. When using packet switched systems such as Ethernet or IP, we only need to use the data bandwidth required, in this instance 2Mbit/sec, with some minor overhead for packet framing.

Two technologies have emerged as the leaders in audio over IP; IEEE 802.1BA and AES67. IEEE 802.1 is otherwise known as Audio Video Bridging (AVB) and works at layer 2 of the ISO seven-layer model. In previous articles we demonstrated that layer 2 switches Ethernet packets and is limited to the domain of the broadcasters’ network. Although its faster than IP switching it’s difficult to move packets outside to such facilities as OB trucks.

To achieve synchronization data integrity and low latency, IEEE 802.1 uses new switcher protocols to provide rate shaping, a method to guarantee bandwidth, and clock synchronization. All of this requires the switcher to have IEEE 802.1BA protocols installed and configured. The IT department will need to understand this configuration and as it’s not standard IT, the system is much more complicated.

The main problem with packet technology is jitter and delay throughout the network. Solutions are required to synchronize the codec frame and bit clocks at the send and receive end of the chain. Without synchronization the audio would degenerate to squeaks and pops and be completely inaudible. 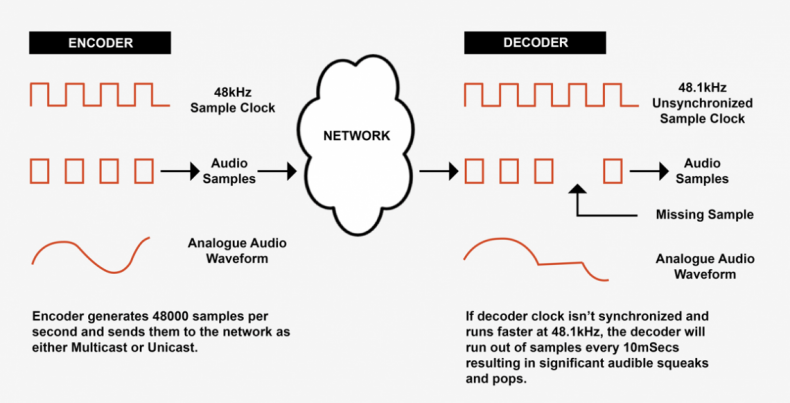 The importance of clock synchronization between encoder and decoder

AES67 is a packet technology working at the IP layer 3 level and provides a specification for the three main areas of audio over IP; synchronization and transport, encoding, and connection management. This is much easier to distribute outside of a facility as it uses IP routing, which can easily deliver to an OB truck. AES67 provides word and frame clock alignment to guarantee the delivery of high quality audio over IT networks.

Dante by Audinate goes one step further as it abstracts away the IT network to deliver a user management system enabling simple discovery of connected equipment and interfacing to computers. In effect providing a system that is easy to manage without having to have an in-depth understanding of the underlying IT infrastructure.

AES67 and Dante both have the major advantage in that they do not need any modifications to industry standard IP routers and can work alongside existing IT networks.

Other benefits of Dante include a plug and play facility. We saw in the previous article on host configuration, how easy it is to create ghosting IP addresses, or reconfigure a camera or sound desk. Over three hundred partner companies build interface solutions to work with Dante making it a complete solution.

Timing is essential in a network and in a later article we will look at how PTP works to achieve clock synchronization for encoders and decoders.