Engineers and lighting technicians know that LED lighting requires considerably less power than other forms of traditional lighting such as Incandescent, Mercury Vapor, Halogen, or in many cases, Fluorescent lighting. However, just because LEDs require less power does not mean one can power them ten-at-a-time from a single power strip or battery. Problems beyond tripping a circuit breaker may exist without the user ever realizing the problem.

It is a well-known fact that LED lighting requires considerably less power than other forms of traditional lighting such as Incandescent, Mercury Vapor, Halogen, or in many cases, Fluorescent lighting. As a user of LED fixtures becomes aware of the claims of, and possibilities for, simpler and more convenient power attachments to the wall-plug and power grid, issues of concern arise where previously, they did not exist. Originally, for instance, 2,000-Watt Tungsten incandescent lights might have been wired by skilled electricians into a distribution panel, dimmer rack, or generator. Someone who does not know the power requirements of their LED replacements, however, might unwisely try to power them ten-at-a-time from a single power strip, or even a battery. Problems beyond tripping a circuit breaker exist without the user ever knowing there could be a problem.

This paper identifies some areas of concern for powering LED lights. An in-depth look into the operation of the power systems behind LED lights is made in order for the reader to better understand the major concepts addressed. Clarification of terminology and explanations of the physics are given so that a more informed decision can be made in the purchase and use of the many available LED lights now on the market.

Power supplies can be divided into two main categories: Linear Regulated Power Supply and Switch Mode Regulated Power Supply (SMPS). These can be further divided into Voltage Regulated and Current Regulated. Modern LED lights are almost exclusively powered by Current Regulated Switching power supplies. SMPS have the advantage of being much more efficient than linear supplies. Typical efficiencies (efficiency defined later in this paper) are 50% for a linear supply and 93% for an SMPS of a similar power level. The reason to regulate current and not voltage can be seen by observing the linear relationship between LED output versus LED Current. Current regulation provides a more stable LED brightness than regulating the voltage (see Figure 1). 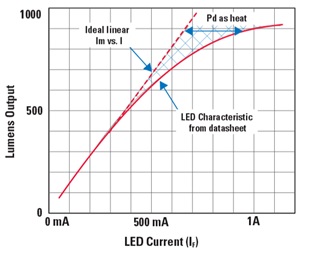 We can conclude that a current regulated SMPS is usually the best way to drive an array of LEDs. Let’s discuss the basic building blocks of an SMPS. See Figure 2.

The EMI Filter is a mandatory element. It is used to block the high-frequency switching noise generated by the SMPS. Without this filter, it would likely be impossible to pass the myriad of regulatory agency requirements for low emissions that are conducted back into the power lines.

The Bridge Rectifier is typically a set of diodes whose function is to convert AC power into DC power.

The PFC circuit is often omitted in the design for cost and size concerns of the power supply manufacturer. This PFC circuit is becoming more of a requirement as regulatory agencies tighten the requirements on power line noise and harmonics that contaminate the power grids.

Over the last 30 years, the world has migrated from use of Linear Regulated power supplies to SMPS. Power savings and rock-bottom offshore manufacturing costs have pushed many billions of SMPS onto the world’s power grids. This has created many problems for the power companies, as SPMPs punish the grid with switching noise and 50 Hz. or 60 Hz. waveform distortions that are quantified as “Line Harmonics” (more on this later).

The DC-DC regulator is the workhorse of the system. Included are large transistors, capacitors, and inductors. These transistors literally chop the incoming rectified DC current into slices of varying and controlled duty-cycle current. As one can imagine, very careful design and control must be adhered to in order to keep things from blowing up or catching fire. The quality and expense of the design determine the amount of hours and at what temperatures these large components can operate without degradation and/or failure.

The Control Logic is the brain of the SMPS. It takes care of all the regulation, safety, and protection needs of the supply.

Figure 2. Basic Building Blocks of an SMPS. Click to enlarge.

The old incandescent filament light bulbs have been very easy on the power grid. They are resistive in nature and do not create switching noises. Their Power Factor is equal to 100% (100% being the best possible), and the power companies had no issues with them. Furthermore, one could put a Triac-based light dimmer circuit in linkage with front of them and quite easily regulate the net current going through these resistive loads. Sound Stages and Broadcast studios still use massive banks of dimmers to control their Tungsten and Halogen lights.

So what is a dimmer, how does it work, and why can’t I use a dimmer on my LED light fixture?

Triac dimmers are high-voltage electronic circuits that chop portions of the AC waveform going into the load circuit. They are typically based upon a device called a Triac (Triode Alternating Current Switch). The Triac senses a control voltage, usually set by a knob or signal from some controller, and terminates conduction at some percentage of the AC waveform. In short, the Triac “disconnects” the load from the AC on a duty-cycle basis. 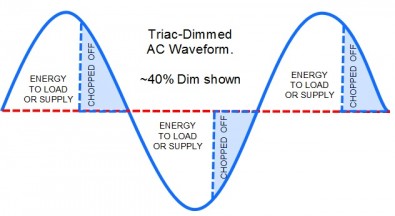 Figure 3 shows that Triacs do ugly things to the shape of the waveform and many loads do not like running off of these sliced-up waveforms. As mentioned before, resistive loads such as filament bulbs just don’t care about this ugliness. But the control circuits in an SMPS usually do not know how to control the power stage when presented with slivers of current. There are specialty LED drivers and fixtures that are designed to operate from these slivers. However, the vast majority of all high brightness LED fixtures will not run very well from the dimmers. This is why they must dim using DMX, 0-10V, or wireless links.

Let’s first clear up some definitions. Efficiency and Efficacy are words thrown around quite a bit in the LED lighting world. Both are statements definable per the classical definition of Efficiency (η) as:

Equation 2 applies to our topic and is true from Equation 1, assuming the power is measured in any measureable time interval. What this is saying is that as we approach 100% efficiency, there are no power losses in the system (or power supply, in our case). As an example, an SMPS that is operating at 95% efficiency only loses 5% of the input power as heat.

Efficacy, as defined by the Illuminating Engineering Society (IES), is the ratio of Lumens per Watt. The IES further defines Luminous Efficacy in terms of considering the directionality of the light and its application, but we will stick with a definition of the Luminous Efficacy of a system as:

Why do we say visible Lumens out and not Light output power? Because the true efficiency of the system would include non-visible light output and heat generation. And in the real world of LED fixtures, we care about the power input to, and the useful light output from, the LED or fixture in question.

A note on heat generation: All of these losses manifest themselves as heat generation. As an example, a 300-Watt power supply that is 92% efficient will produce 24 Watts of heat. Imagine the heat of two 12-Watt Halogen bulbs pushing heat directly into the chassis of your very-efficient AC-DC power supply. It will get hot. ‘Efficient’ is a relative term.

Now that we understand the difference between Efficiency and Luminous Efficacy, let’s look at an entire lighting system, shown in Figure 4:

We have already discussed the power supply efficiency in terms of Electrical Power out / Electrical Power in. Whether or not we combine the LED driver with the AC/DC supply, there is still heat generated and thus a combined efficiency rating. In a high-efficiency product, we might see a combined rating of 85% or more. AC/DC SMPS will always be less efficient than a low-voltage DC-DC SPMP because of the switching losses associated with chopping up the high line voltages.

Cabling and the internal wiring of the LED might cost us a 2% loss in efficiency.

Now we get to the interesting part of the system. There is a commonly-used specification on LEDs called the Wall-Plug Efficiency, or WPE. WPE describes the energy losses associated with the conversion of electrical power to light, or photon power, from the semiconductor. Many millions of dollars are spent each year by LED Manufacturers attempting to get this number as high as possible. The numbers assigned in Figure 4 are example numbers. They will range greatly, depending upon the technology and design choices made by the system designer. The Down Conversion stage efficacy also varies greatly. These power losses are associated with the atomic-level quantum losses, or “Stokes Losses”, named after the Irish physicist George Stokes who, in 1849, first quantified these losses. Other losses in down conversion are associated with the internal reflection and absorption in the phosphorescent media.

Finally, we mention the losses of power via the optics. It is nearly unavoidable to have some form of optics either on the surface of the LED itself, or mounted in front of it in the light fixture. Otherwise, we would just spray light all over the room in an uncontrolled manner. As light passes through a medium, it experiences transmission losses in energy. These losses are mainly a function of the surface qualities of the medium and its absorption factor. In general, the more lenses the light passes through, the more optical losses occur.

The designer must consider all of these losses when designing an LED fixture. A well-designed system can provide a very efficacious product.

Part 2 in this two-part series about powering LED fixtures will be published August 11, 2016 on The Broadcast Bridge. Don't miss the rest of this important tutorial series.